I was so excited to eat at the Napa Rose Chef's Counter as an early 3rd anniversary dinner! 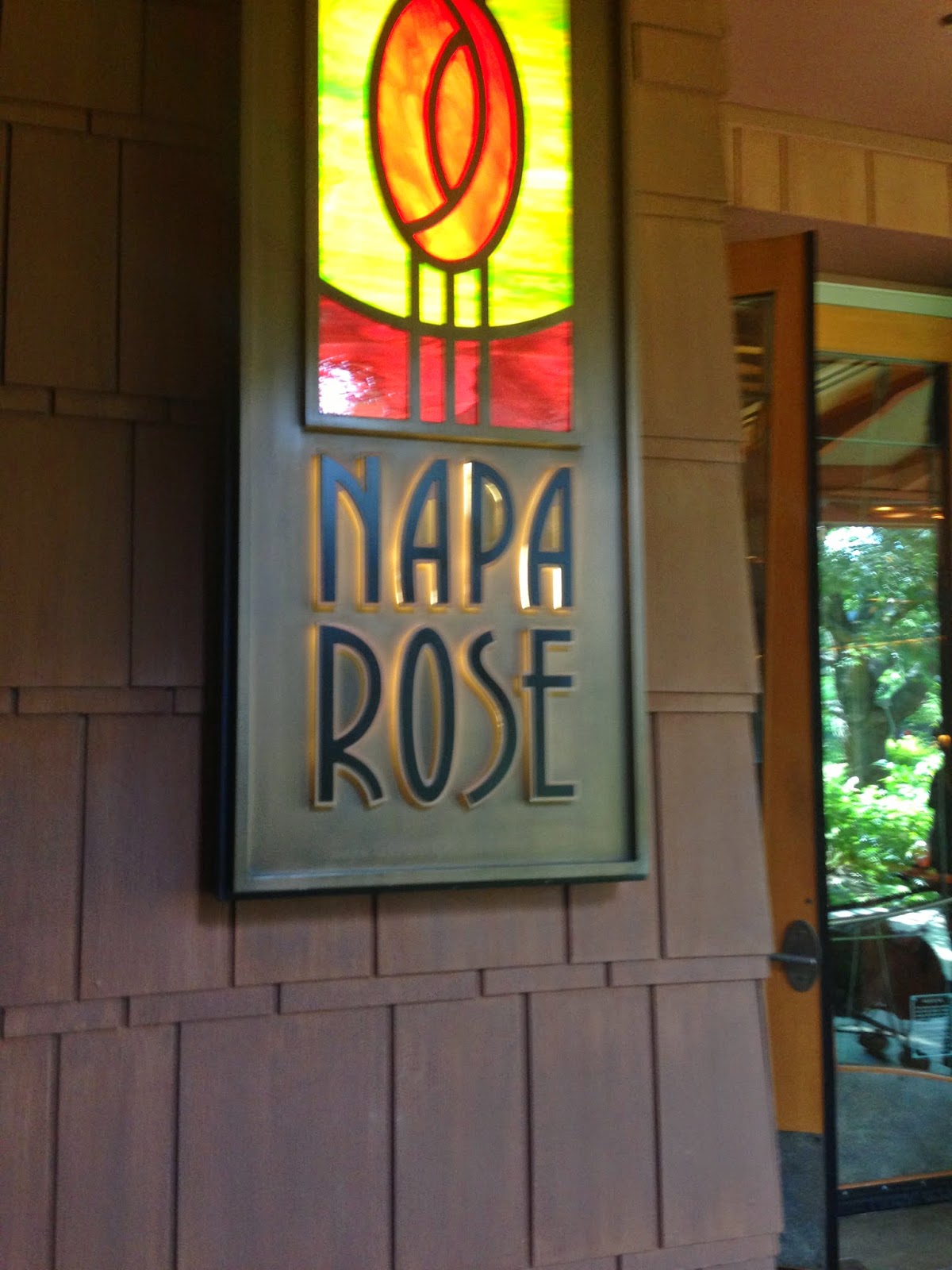 I love watching cooking shows where they prepare all of these fun meals and this made me feel like we were right in it! 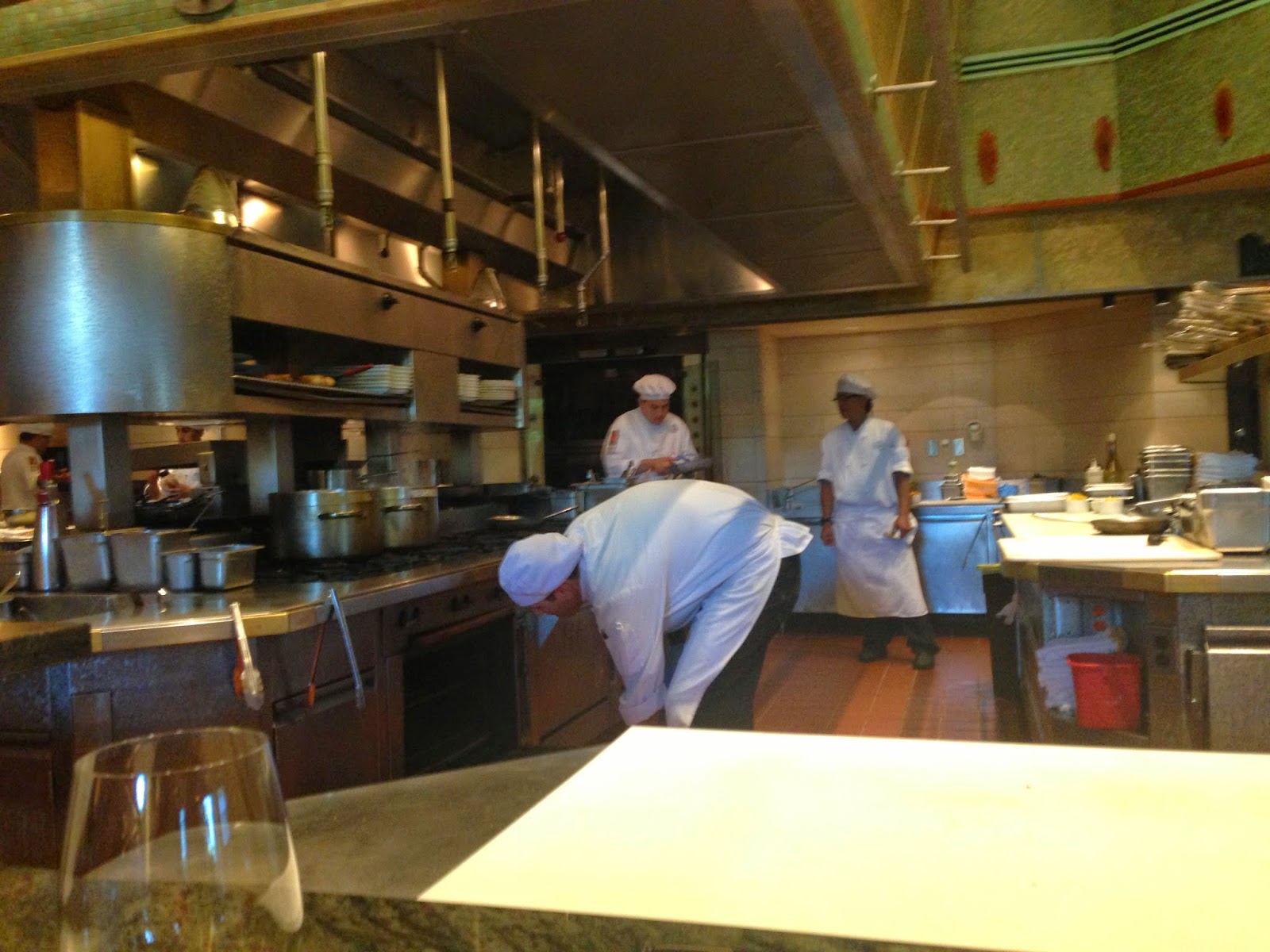 I was advised to ask for the 5th and 6th seats and it was perfect.  We had such a great view of everything!  Our waiter, Hamilton, was great!  He knew I was taking notes so he often repeated what the courses were because I couldn't remember everything the chef said.  The head chef that night was Dan, although Andrew Sutton did come in later and people were taking pictures with him.

For drinks, I ordered a Moscato and Kory had a Kate & Ella which was Ketel One Oranje, Aperol, Licor 43, Fresh Lemon Honey Syrup.  It was pretty sweet and something I would order again. 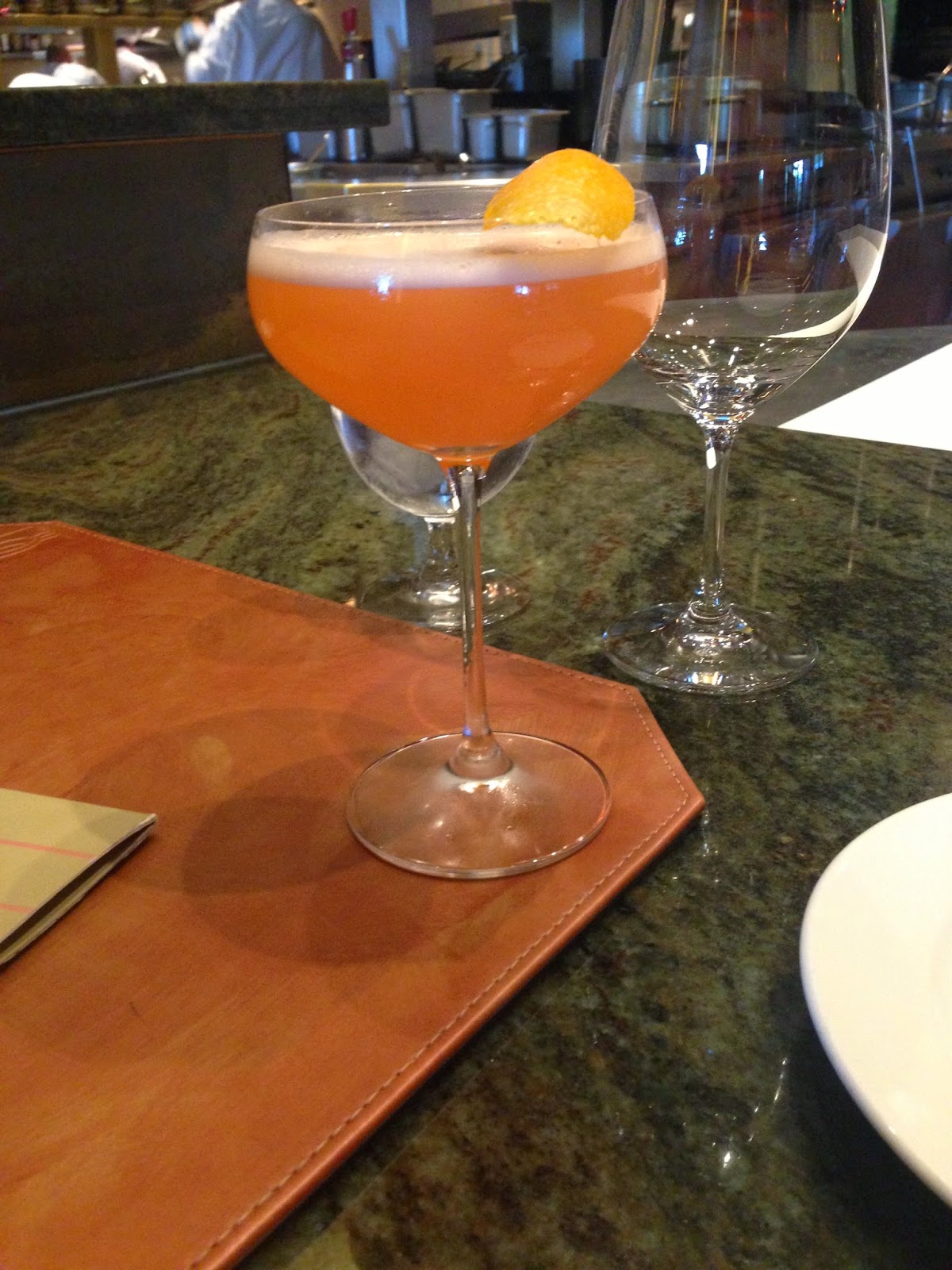 This was our bread selection. 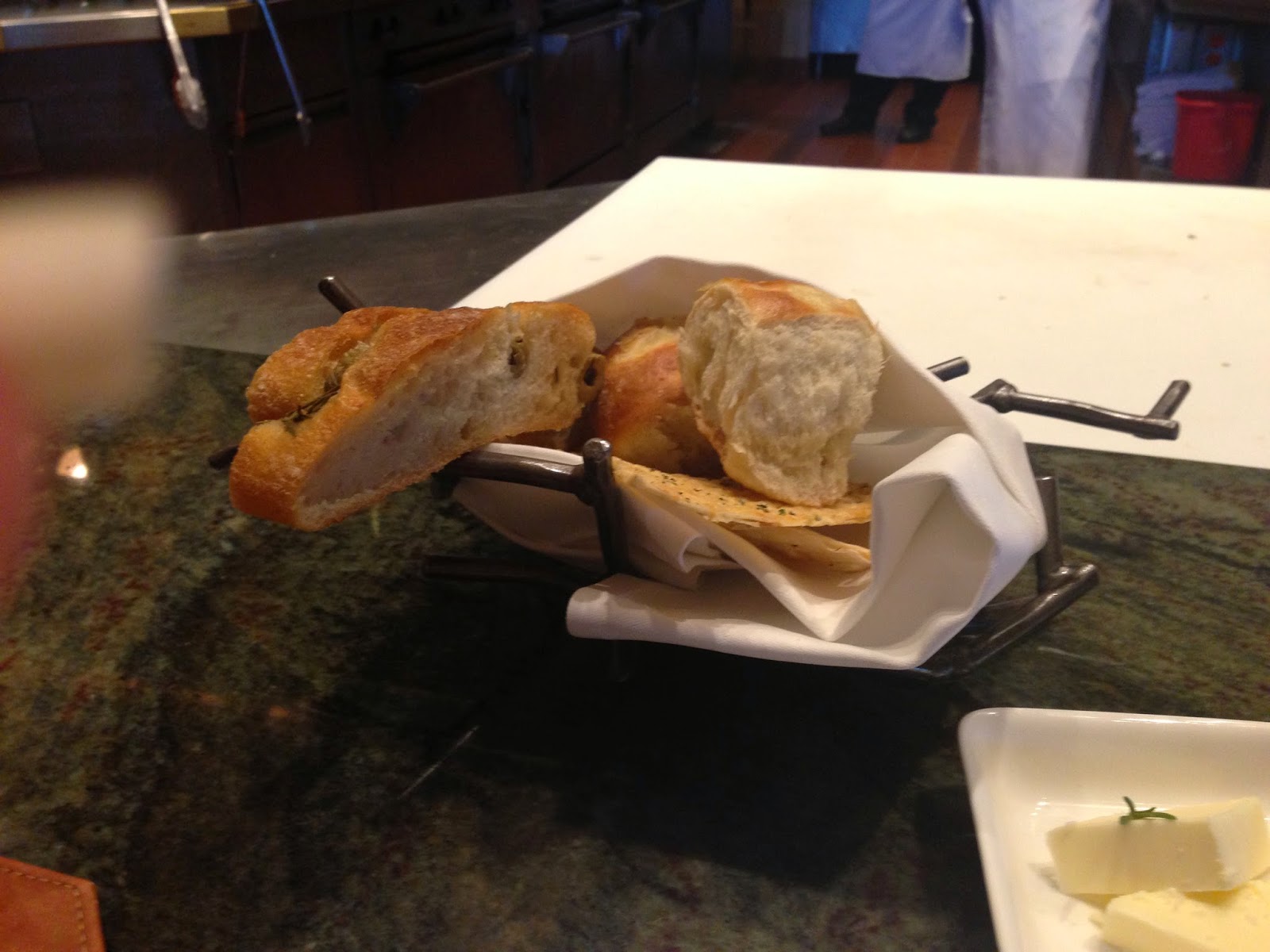 First up was an amuse bouche which was the only thing that was the same for Kory and I the whole night.  It was pumpernickel bread, horseradish sauce, beef, and pickled beets.  It was quite tasty. 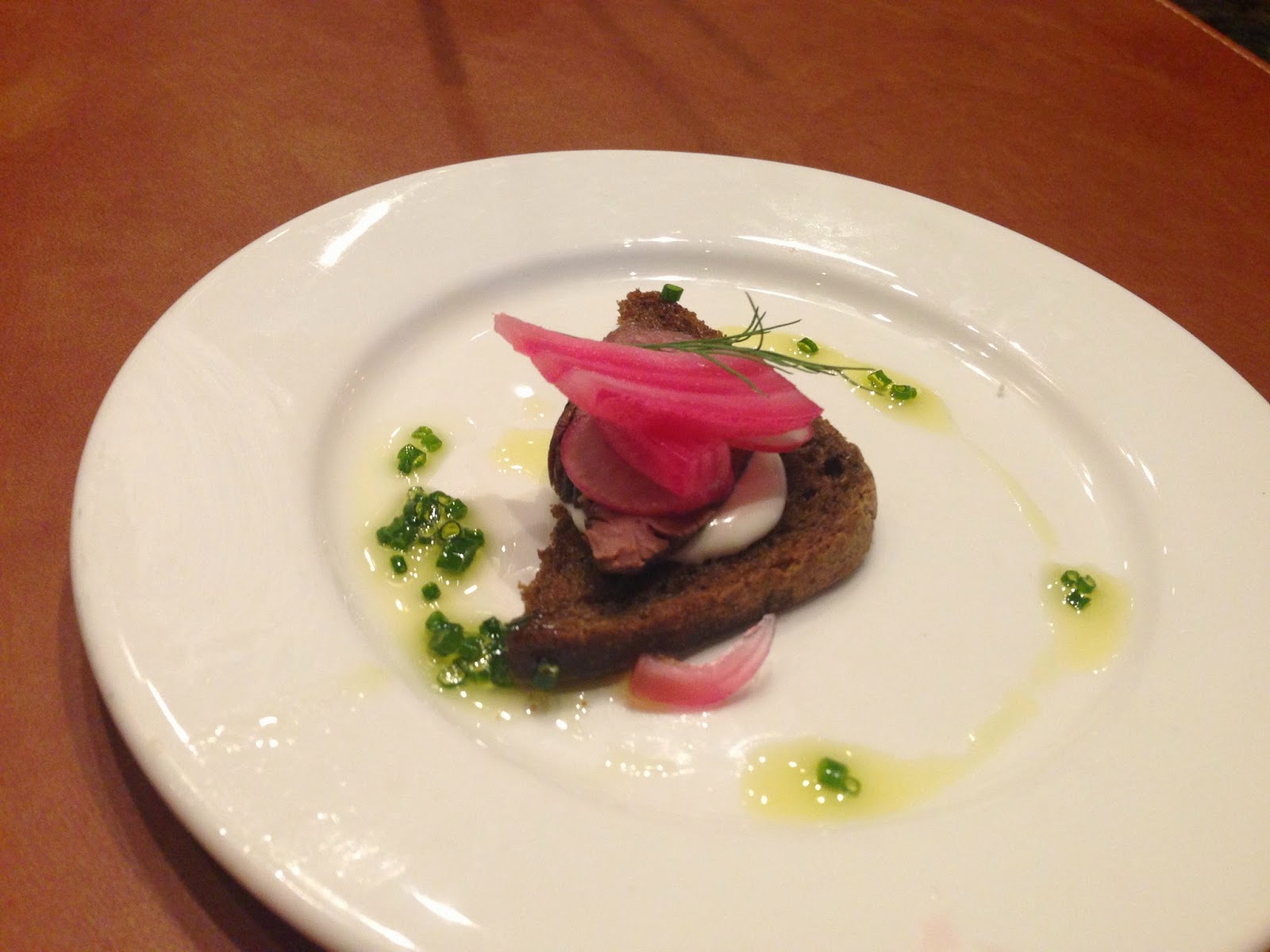 For the first course I had a brioche wrapped asparagus with carrot puree and carrot panna cotta. 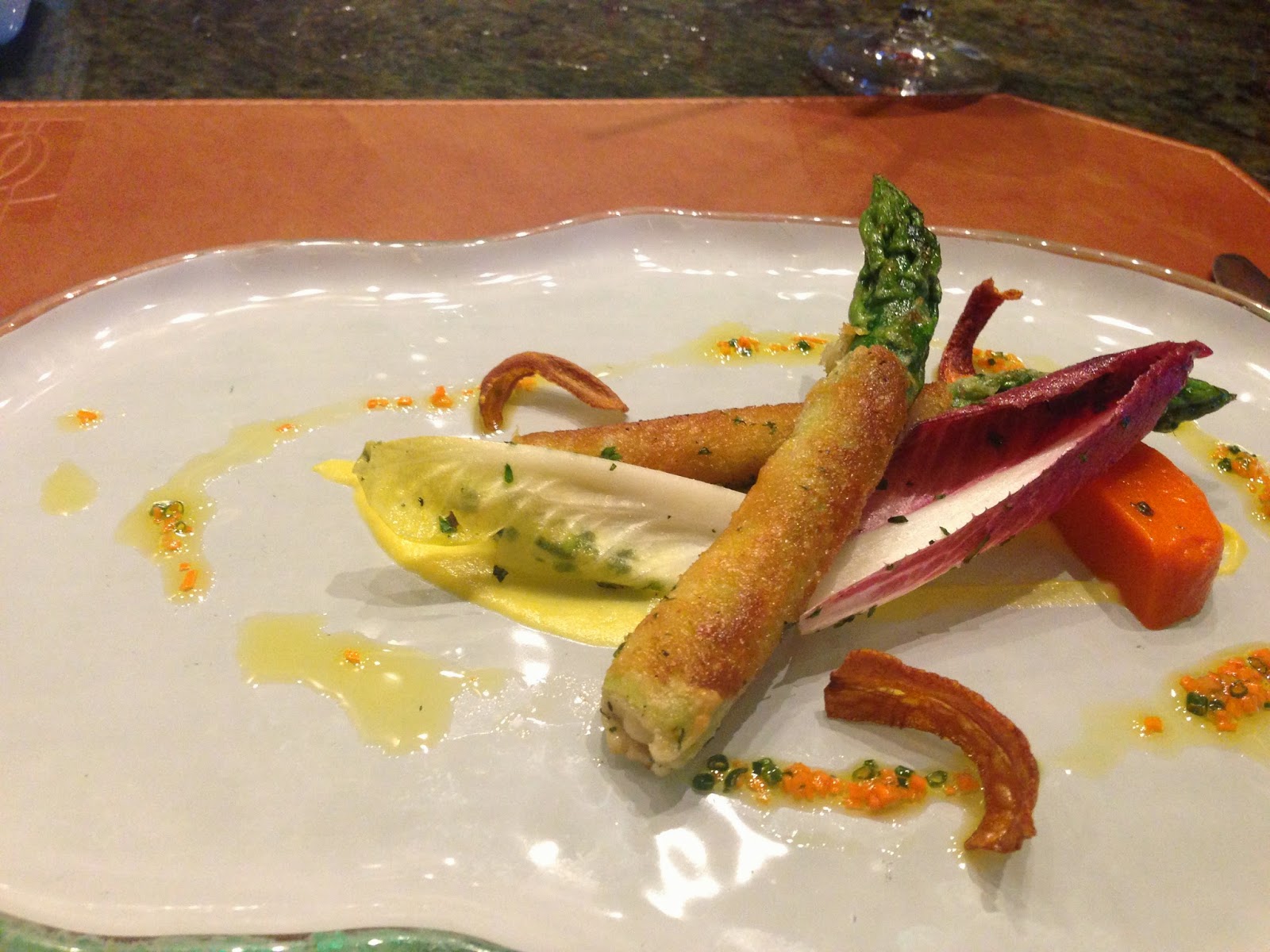 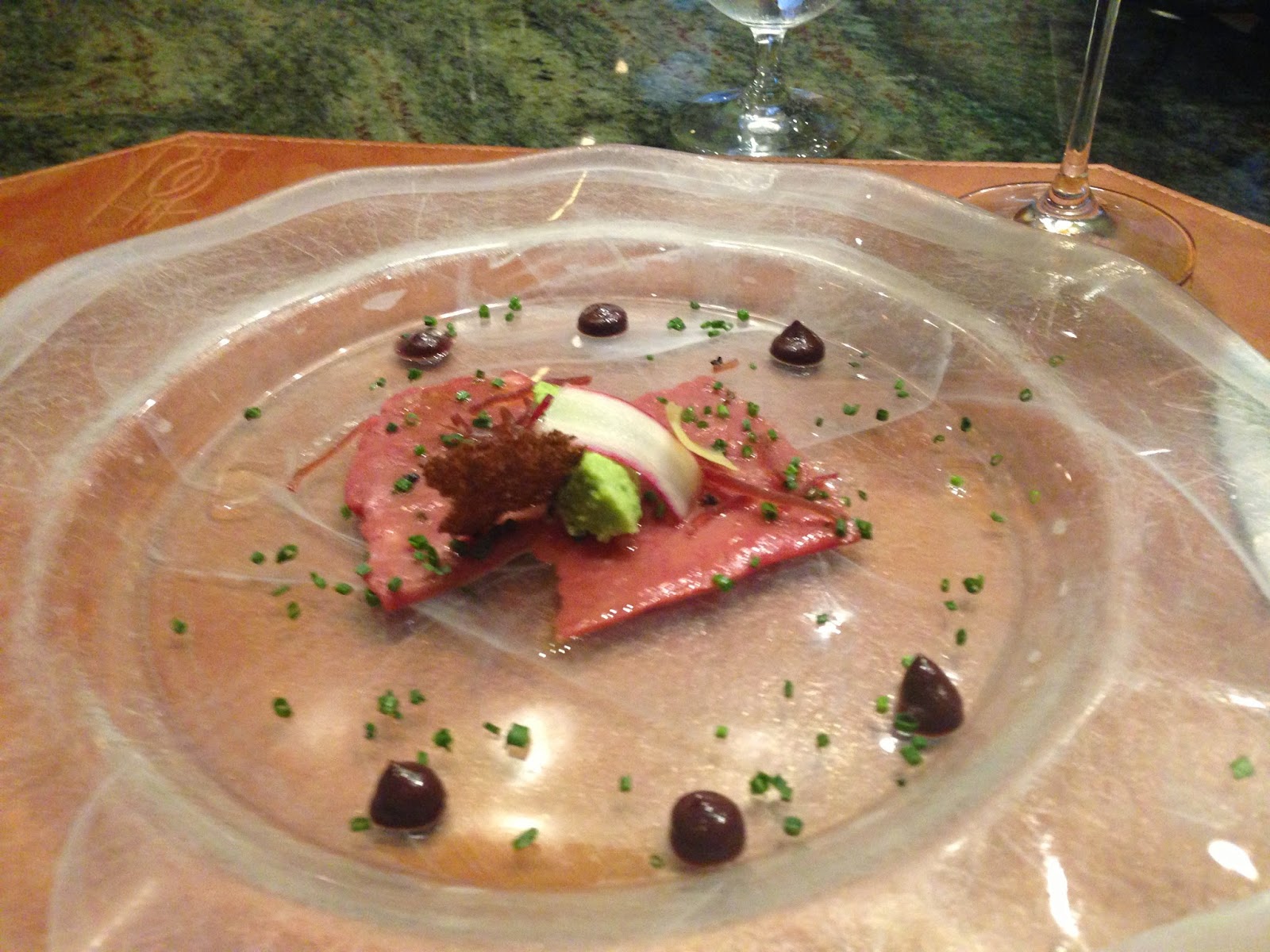 I definitely enjoyed mine more (although Kory said his was better).

For the second course, I had a scallop with lemon and vanilla lobster sauce and potato puree. 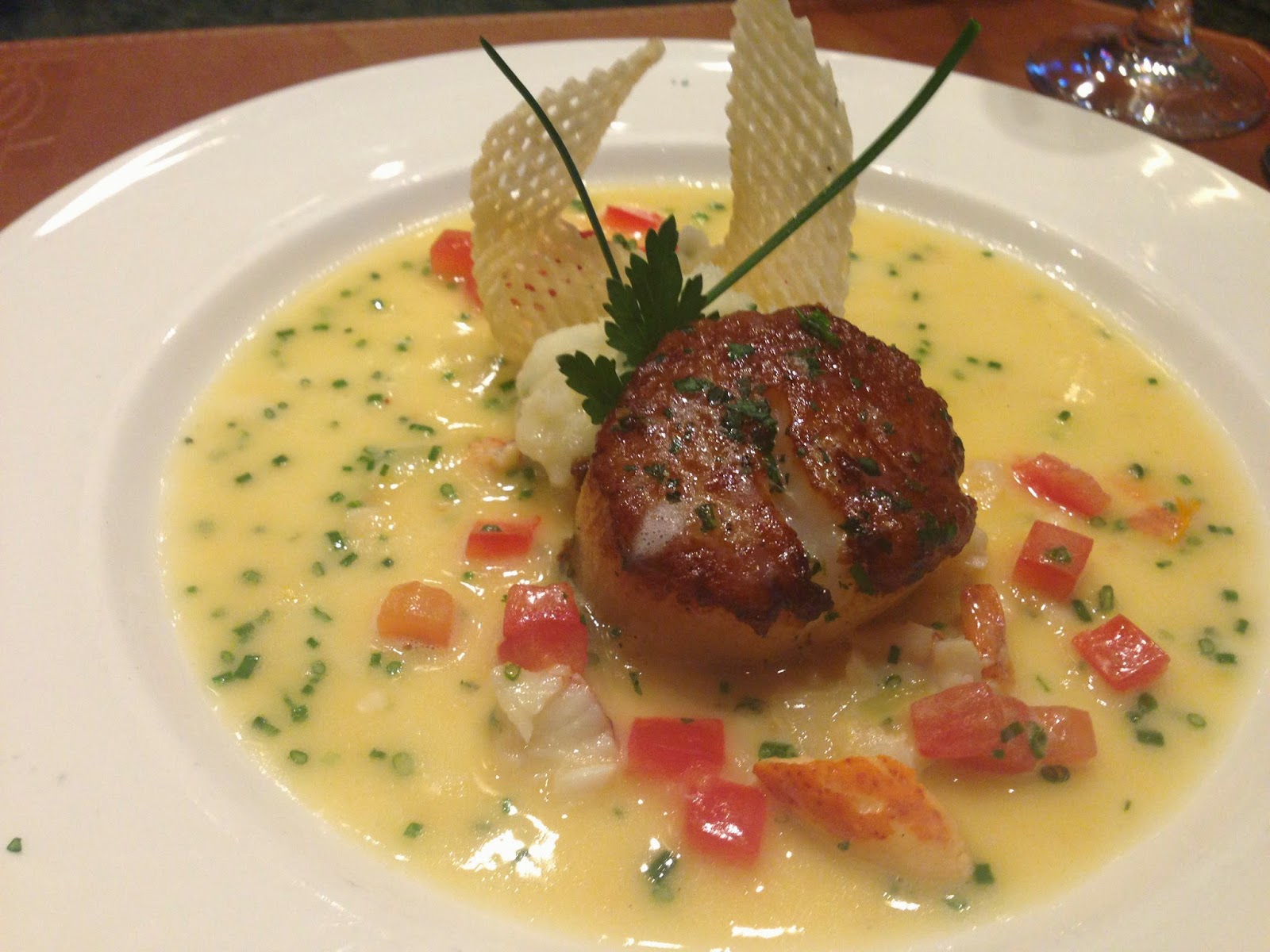 Kory had Hawaiian onaga fish with lemon polenta and bacon. 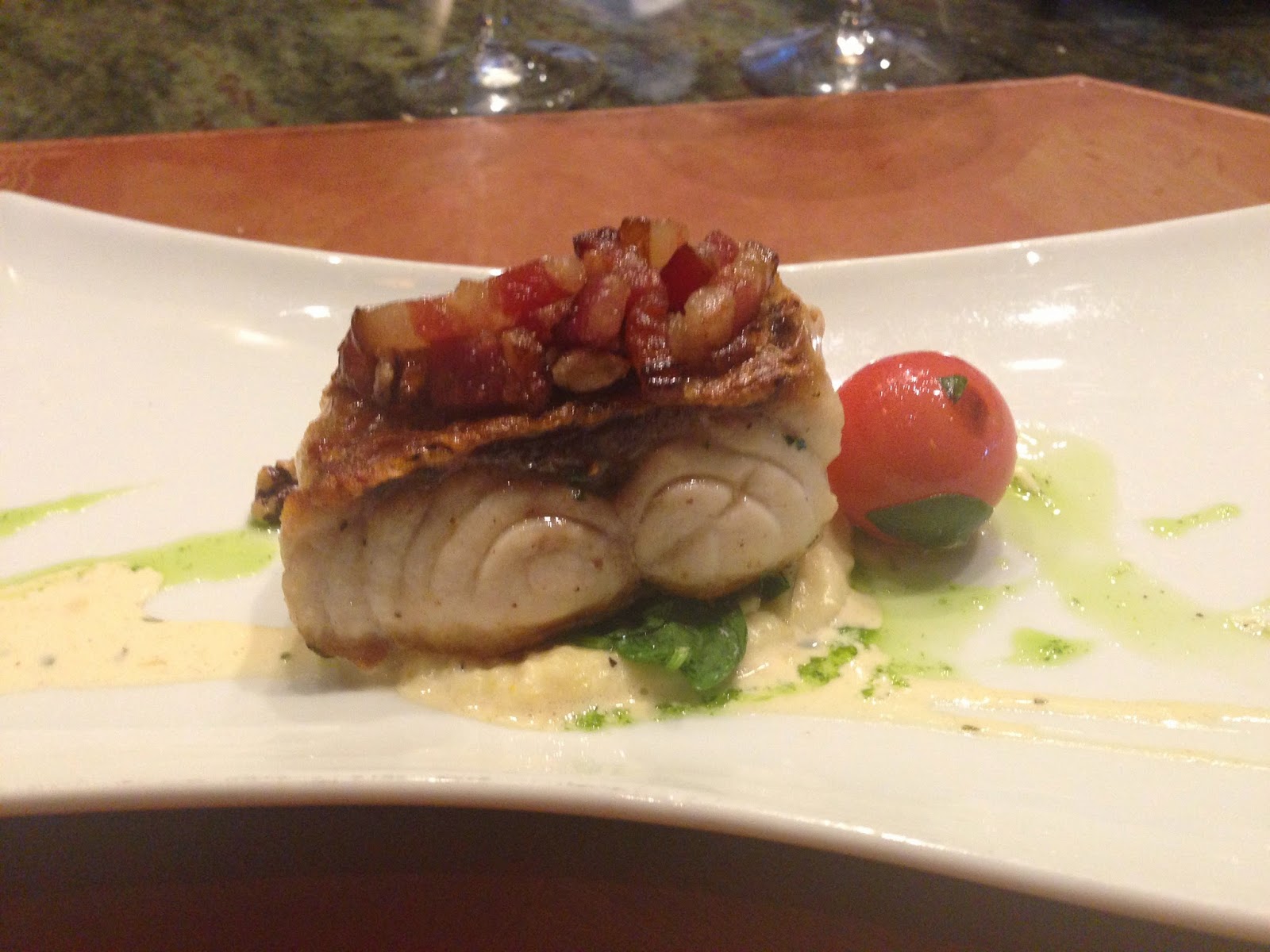 I definitely liked mine way better.  Kory's had too strong of a bacon taste (Never thought I'd say that).  But this course was my favorite of the night.  The scallop was HUGE!  And the vanilla lobster sauce (with chunks of lobster!) was to die for!  I was eating it with a spoon.  I could easily have eaten a bowl of it like it was a soup!  My one complaint was that I had specifically listed tomatoes as a food I disliked.  But it was easy enough to eat around the tomatoes so I let it slide :)

Here is picture of the kitchen 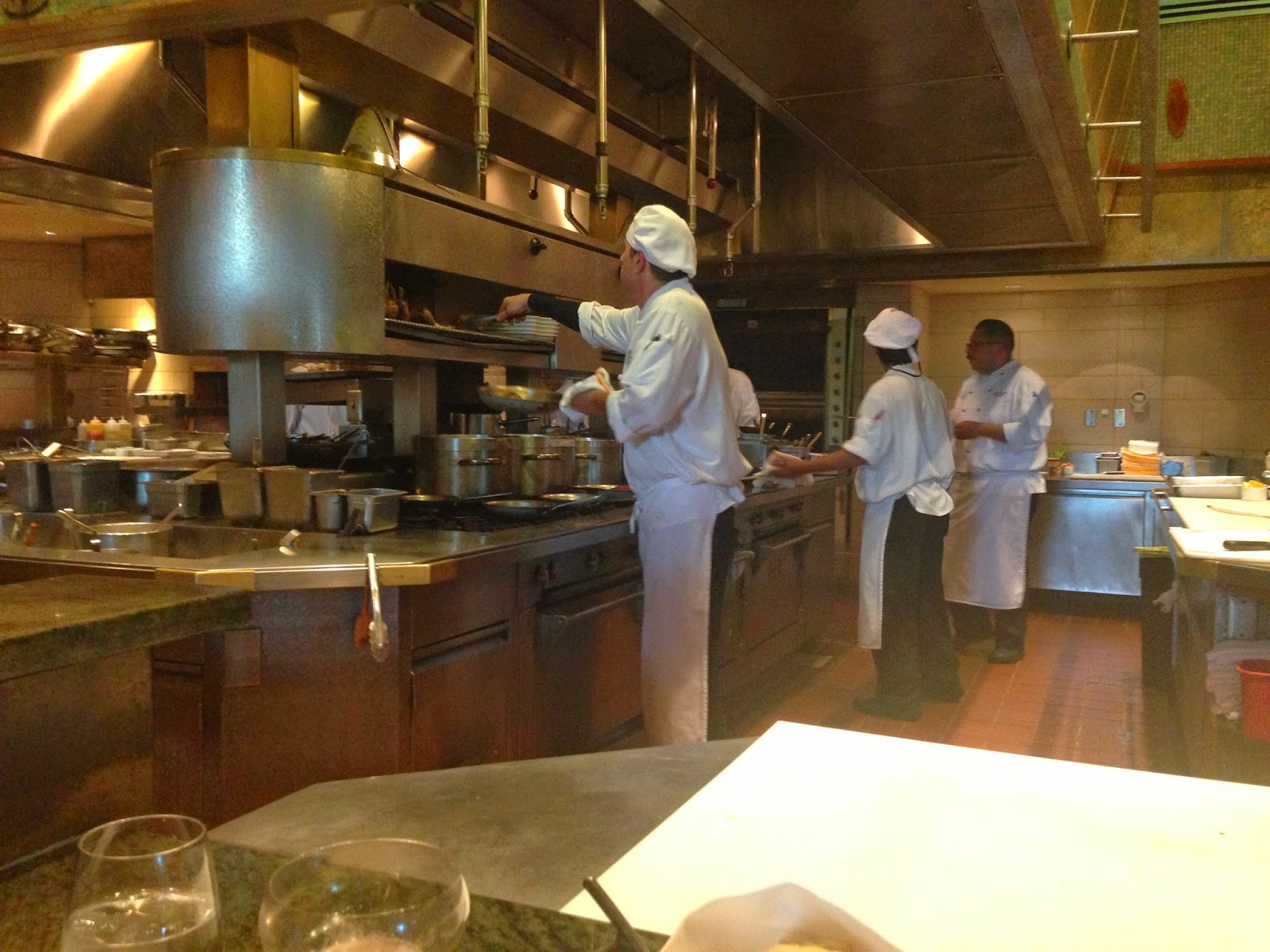 For the third course, I had a rabbit fricassee with a white cheddar bacon dumpling. 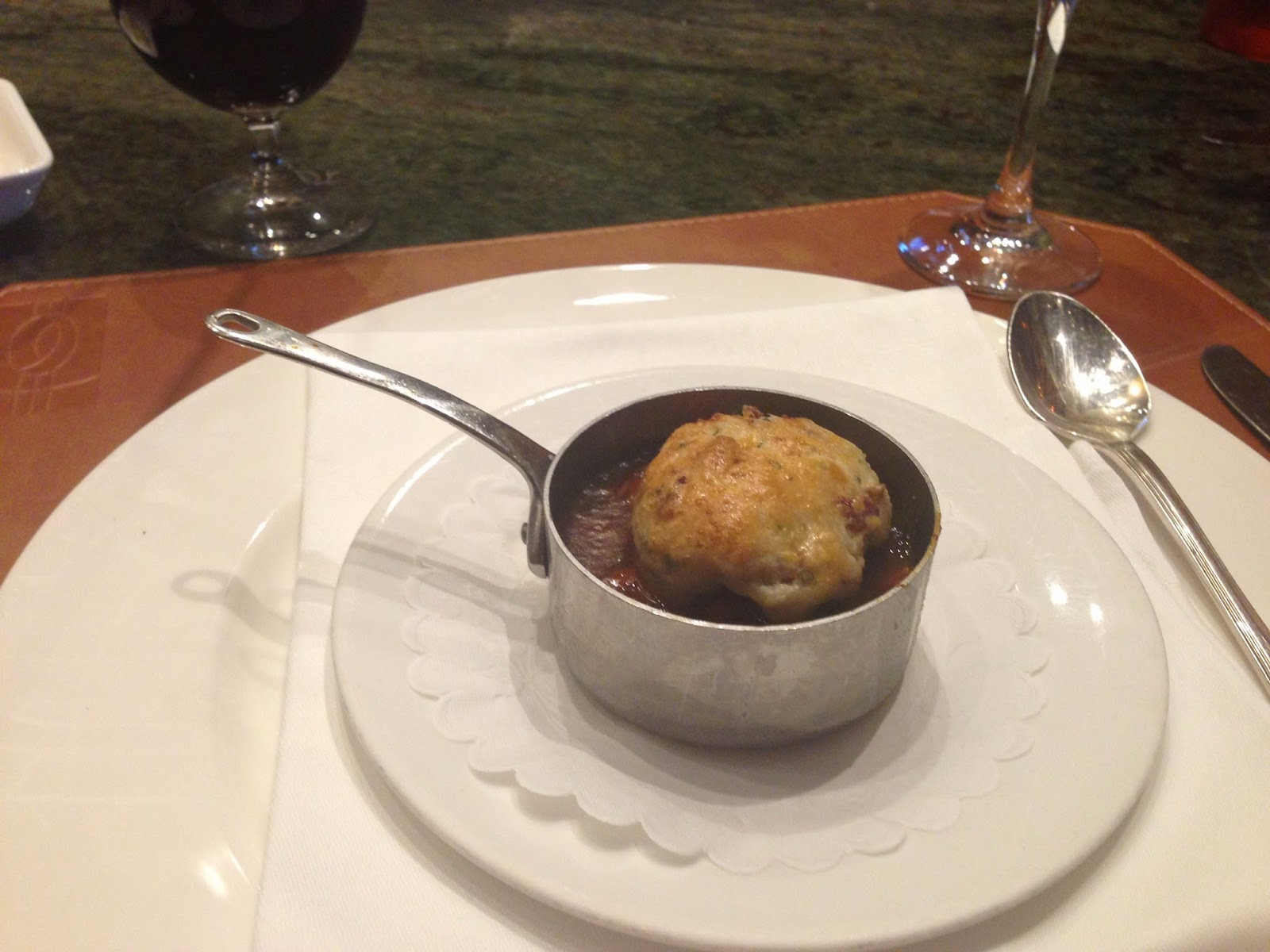 Kory had a duck breast with mushroom and almond ganache and cherries. 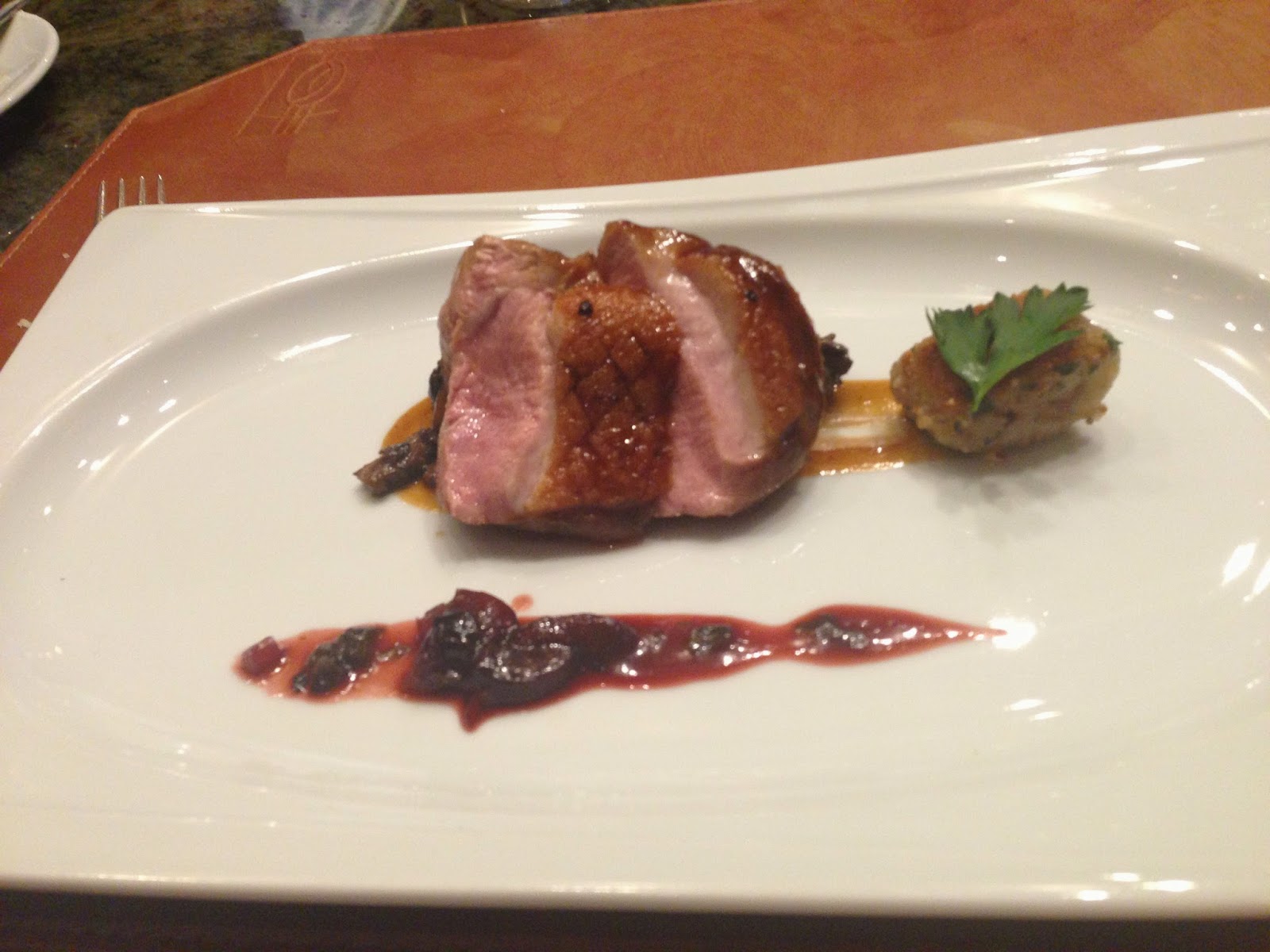 This was the only course that I liked Kory's better than my own.  I had never had rabbit before but I was up for anything.  The meat was fine as was the dumpling, but I wasn't a fan of the sauce.  I'm not a huge fan of stews and this reminded me of a stew.  Kory's duck breast was delicious though! 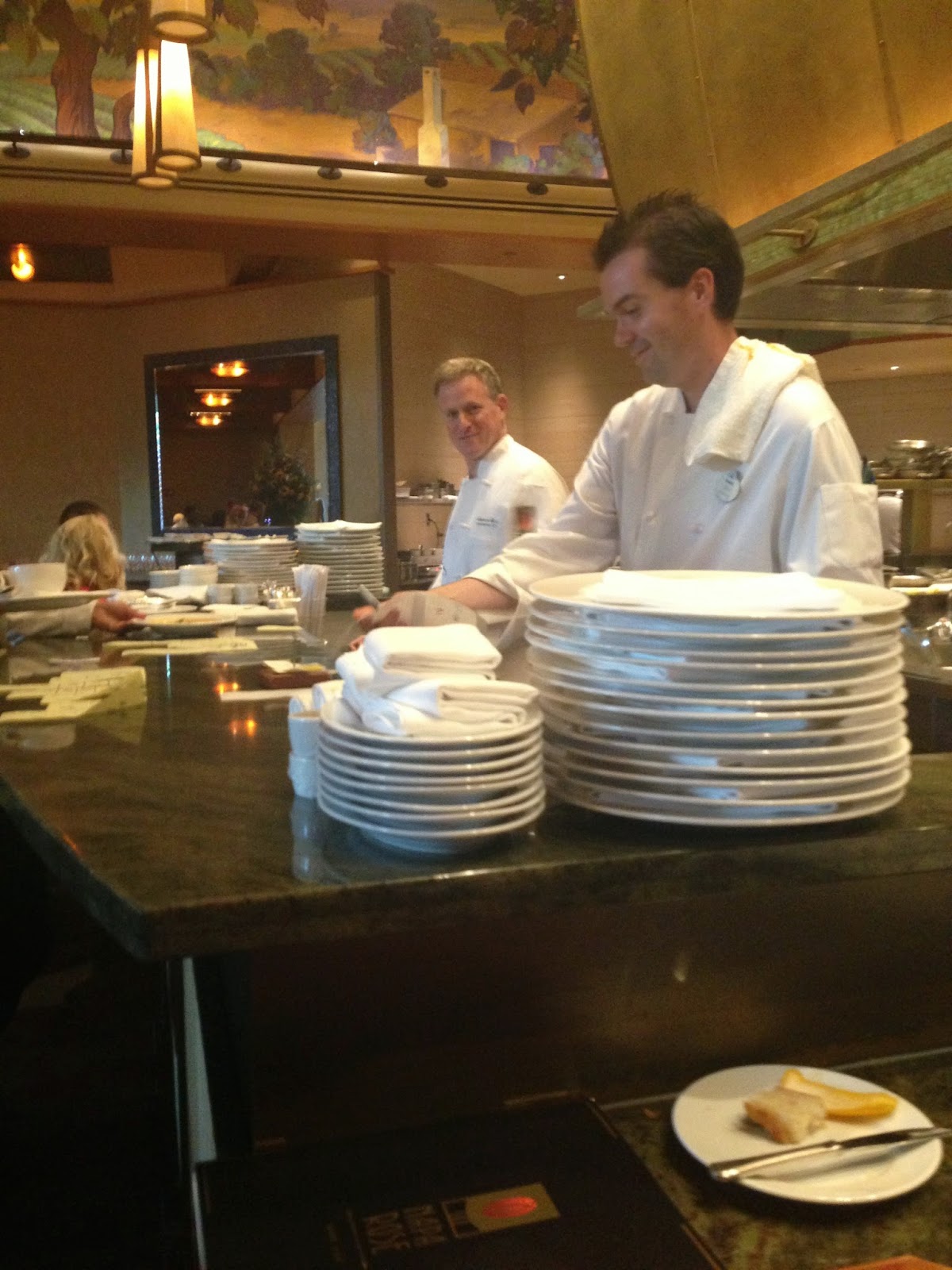 For the fourth course, I had a beef filet with mushrooms and scalloped potatoes. 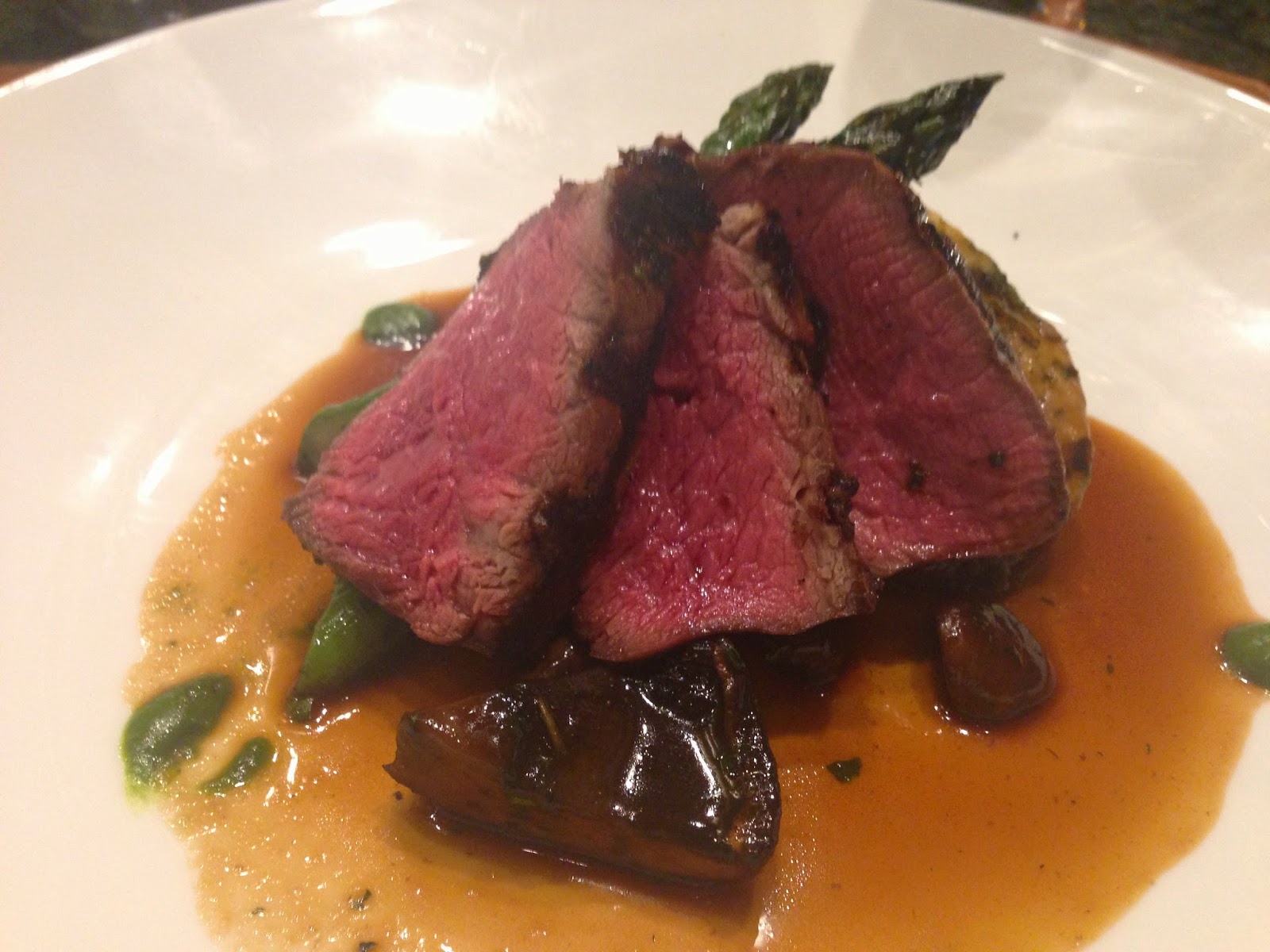 Kory had a Colorado rack of lamb with tomato ragout. 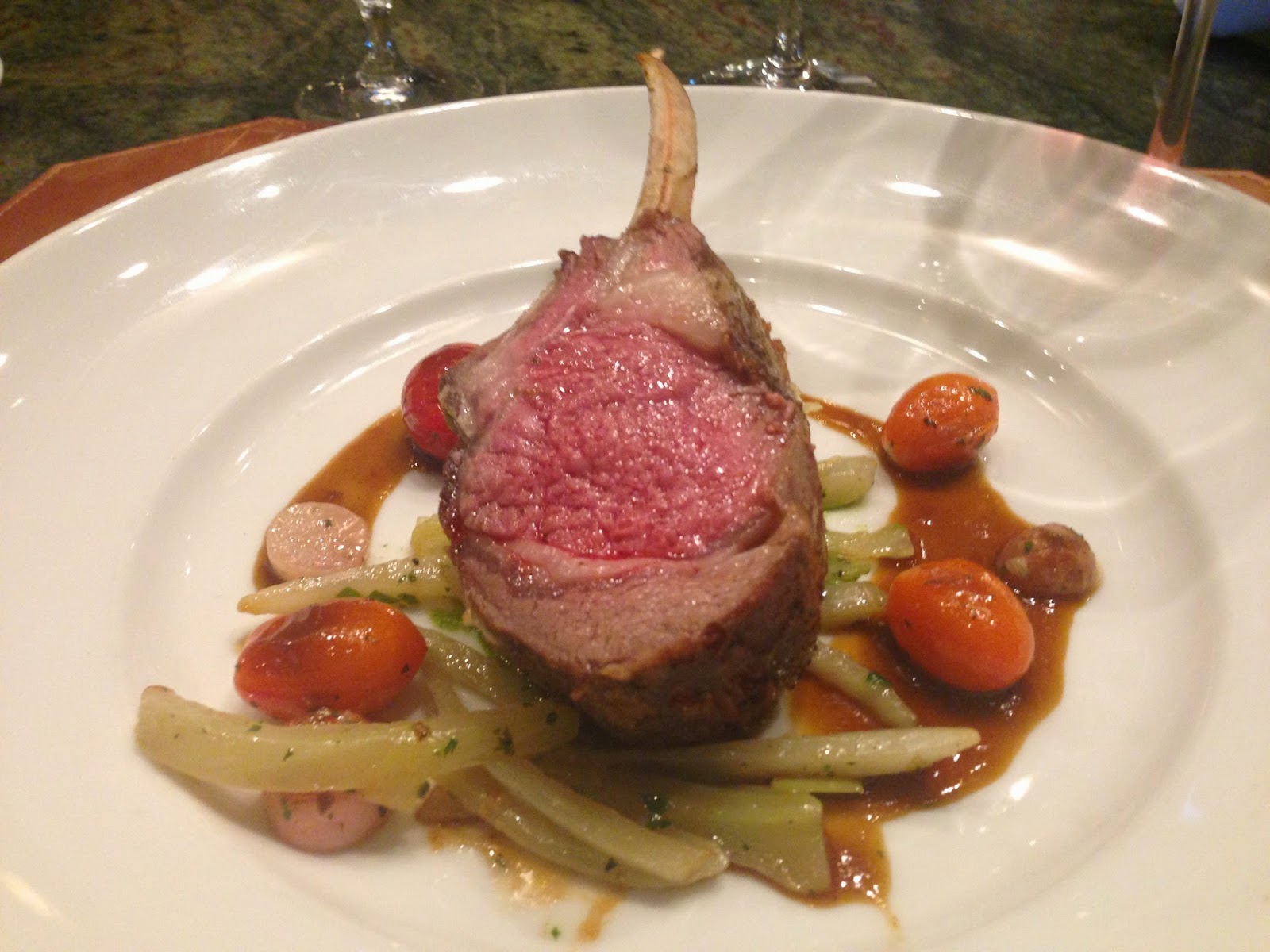 Kory was excited that his course had "Colorado" in it, since that's where he's from but my filet was cooked perfectly.  I am a medium rare type of gal and this was cooked just right!

Lastly, we had dessert.  I was sooo stuffed by this point but couldn't wait to see what we would get.  I got a warm chocolate lava cake with caramel ice cream and fleur salt on top. 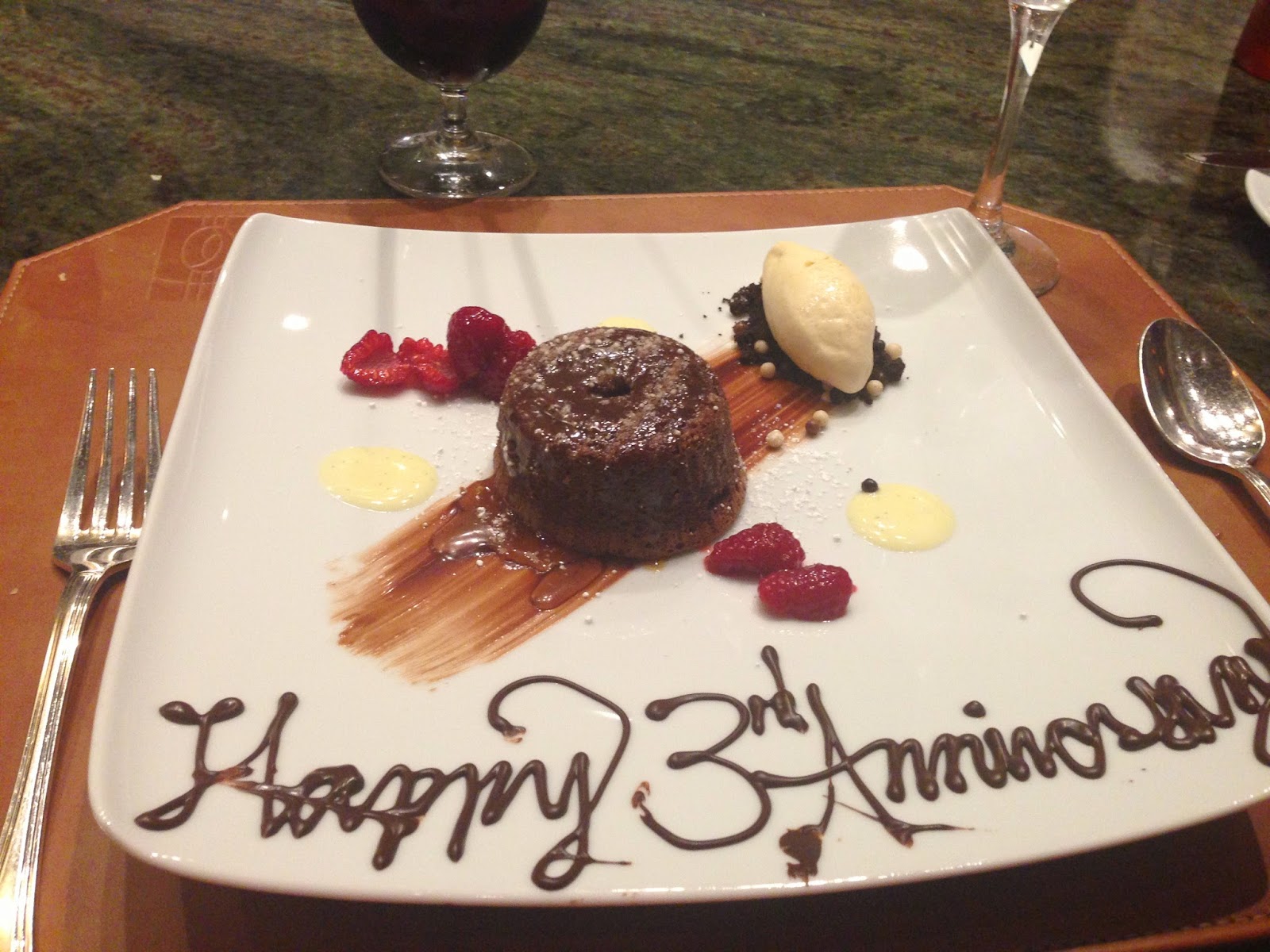 Kory had an almond crusted cheesecake with passion fruit sorbet. 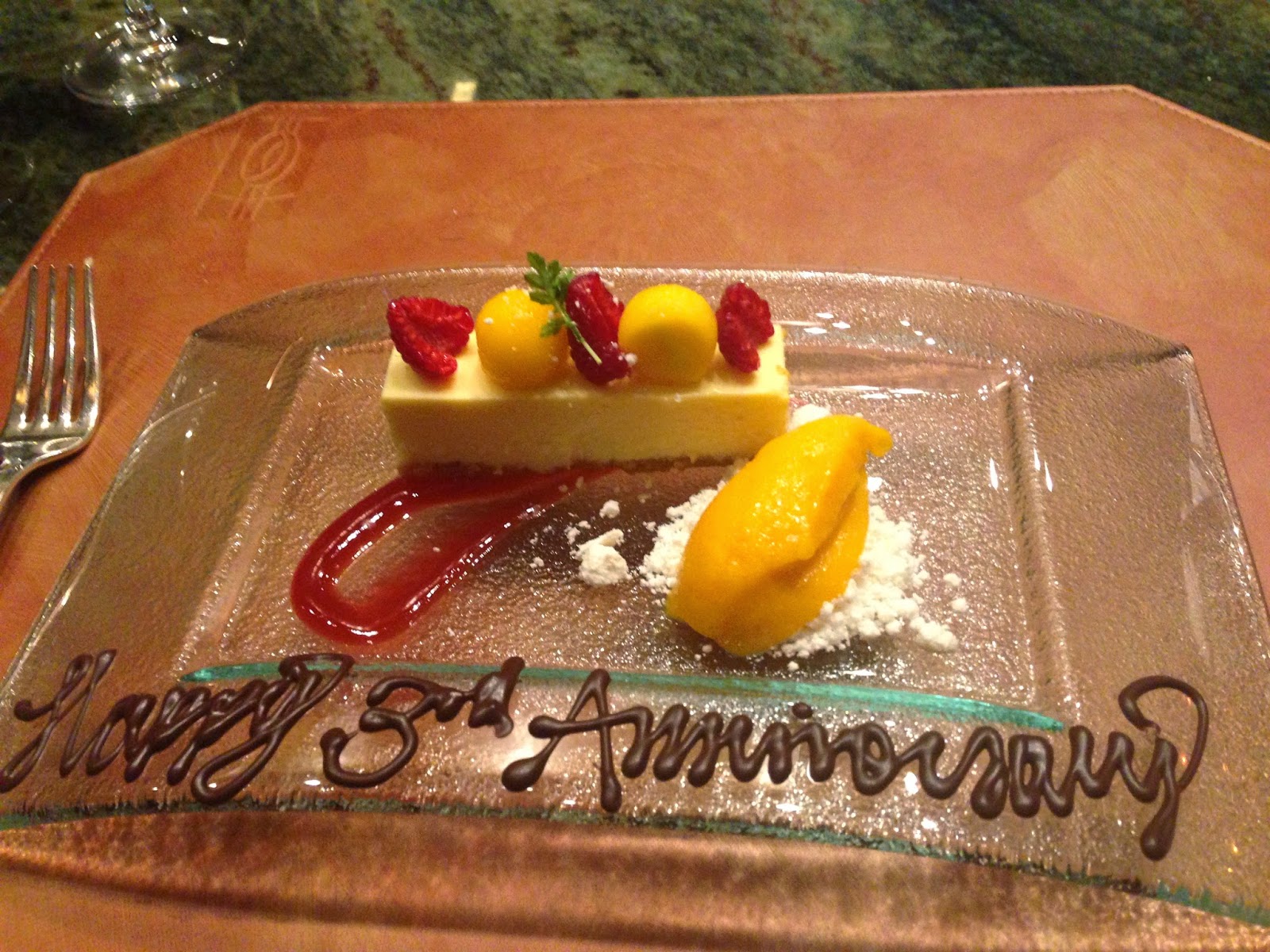 They nailed it!  Not sure how they could tell since we didn't mention it but I'm definitely a chocolate dessert lover and Kory is a cheesecake and fruit lover.  It was perfect!

We were sent home with some chocolates and an anniversary button. 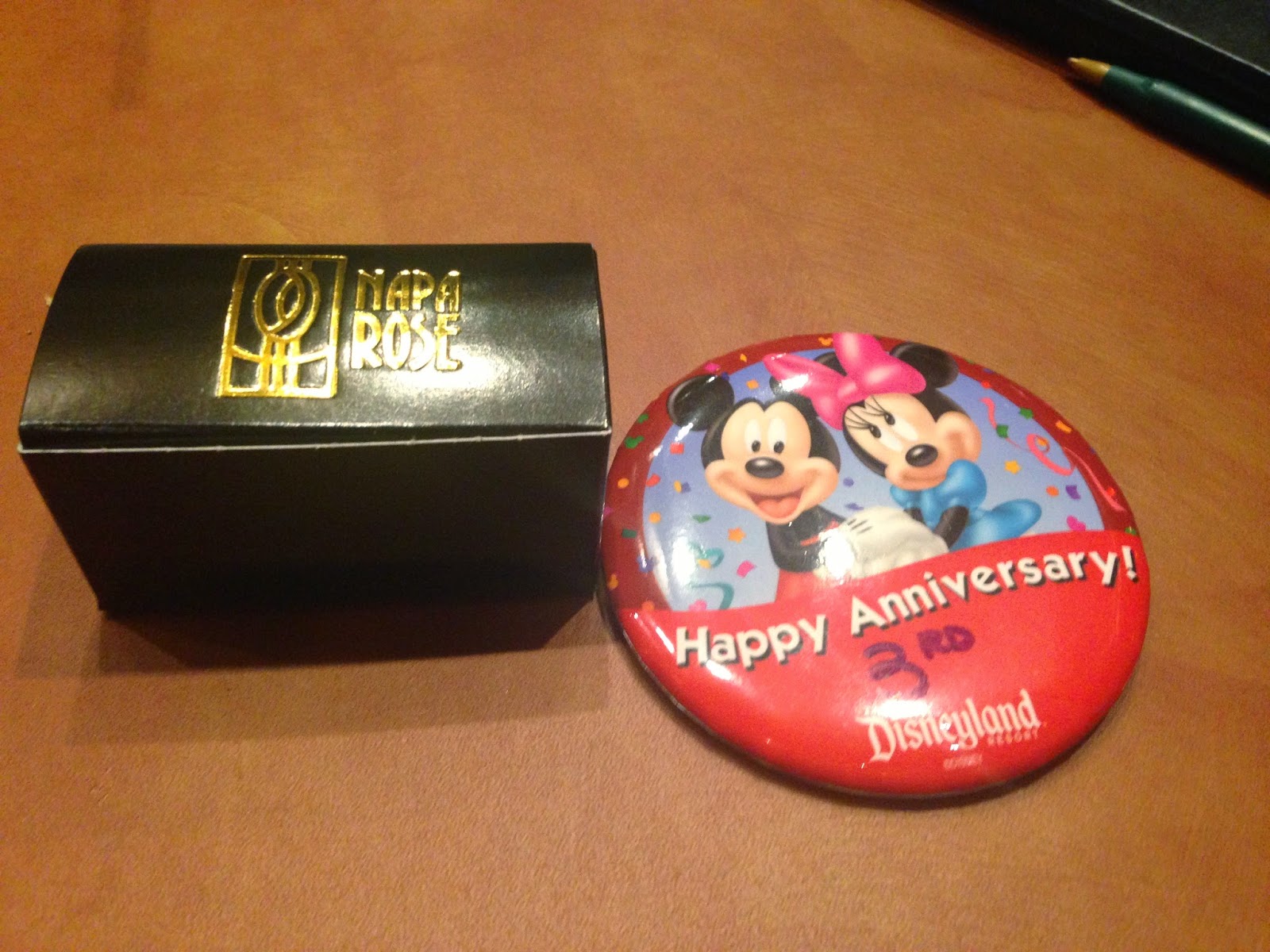 Our meal was absolutely divine and ties with Victoria and Albert as my favorite meal ever!  Yes, it's expensive.  But it is absolutely and completely worth it! I cannot wait to be able to dine there again someday! 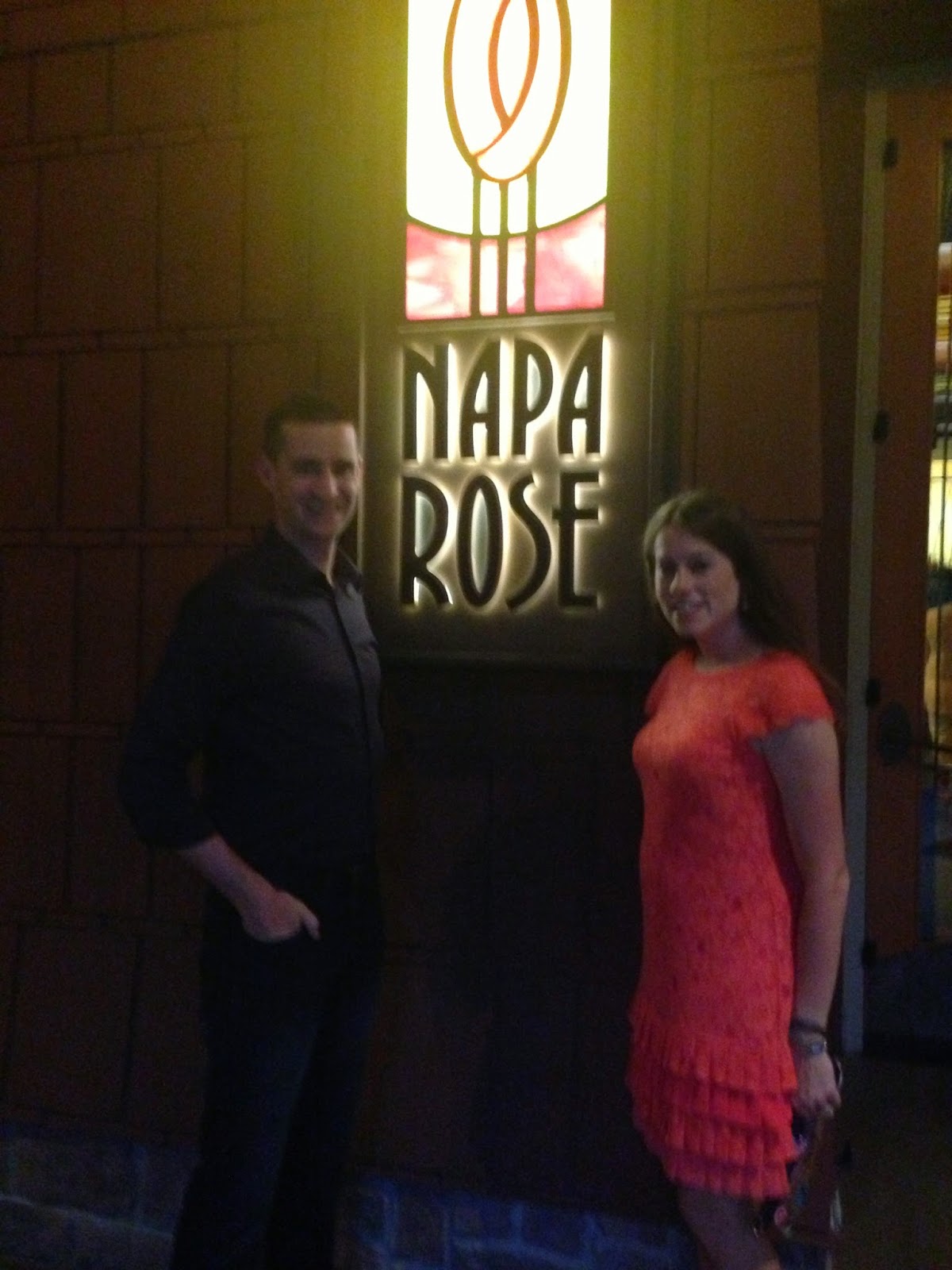