We headed over to Steakhouse 55 for our dinner.  I was excited because I had been wanting to eat there but since we already had 2 other nice dinners planned, I decided we shouldn't splurge on that one. And because of that, I had only brought one nice outfit.  I was worried that the tees we were wearing would be too casual.  But we saw a variety of outfits in the restaurants including lots of tees and shorts.

We had time to grab a quick drink at the bar before we were seated. 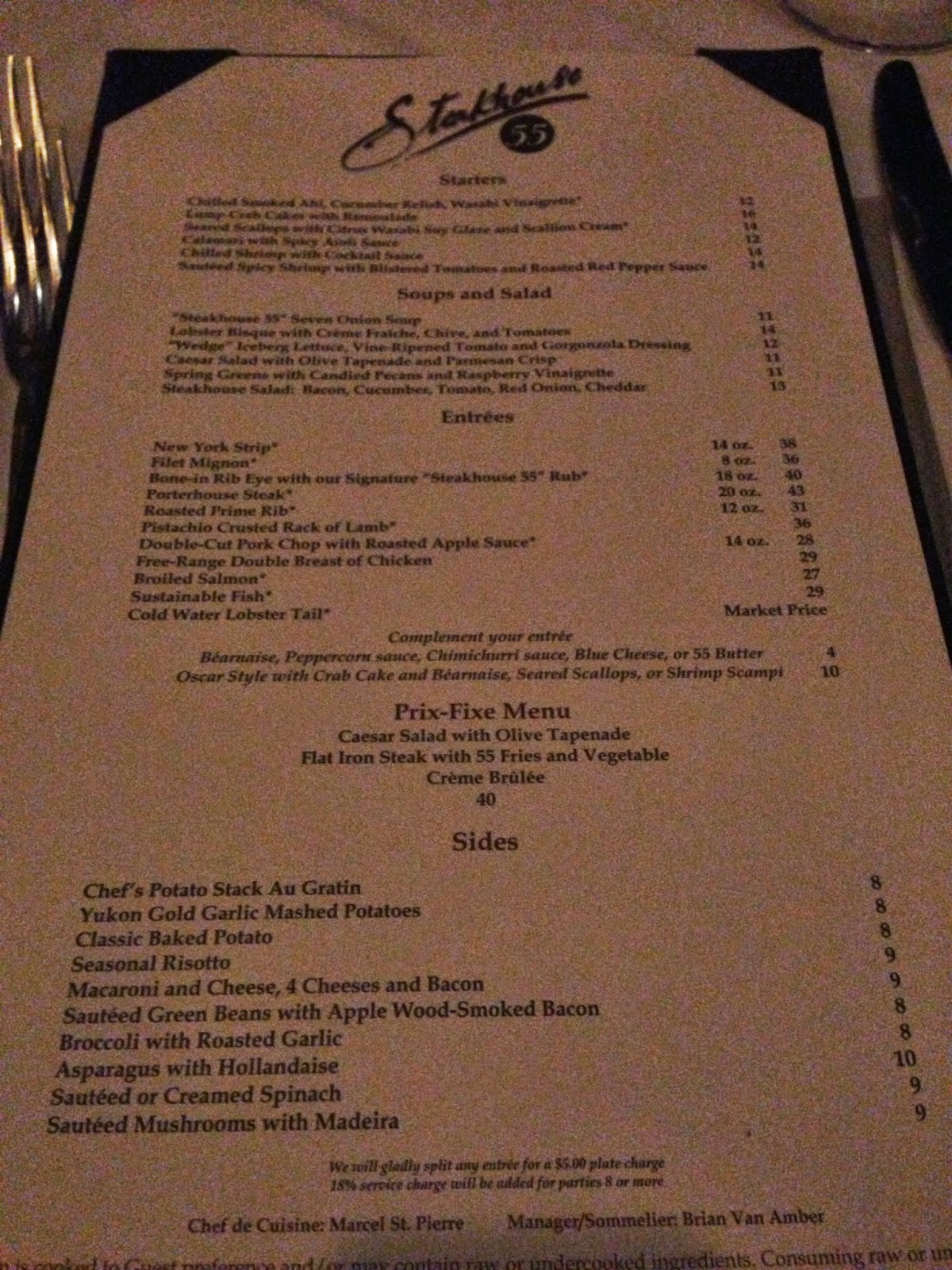 I had seen that there was a cheese plate out on the bar menu (I think it might have been listed under desserts) and since I love cheese, I had to get that as an appetizer. 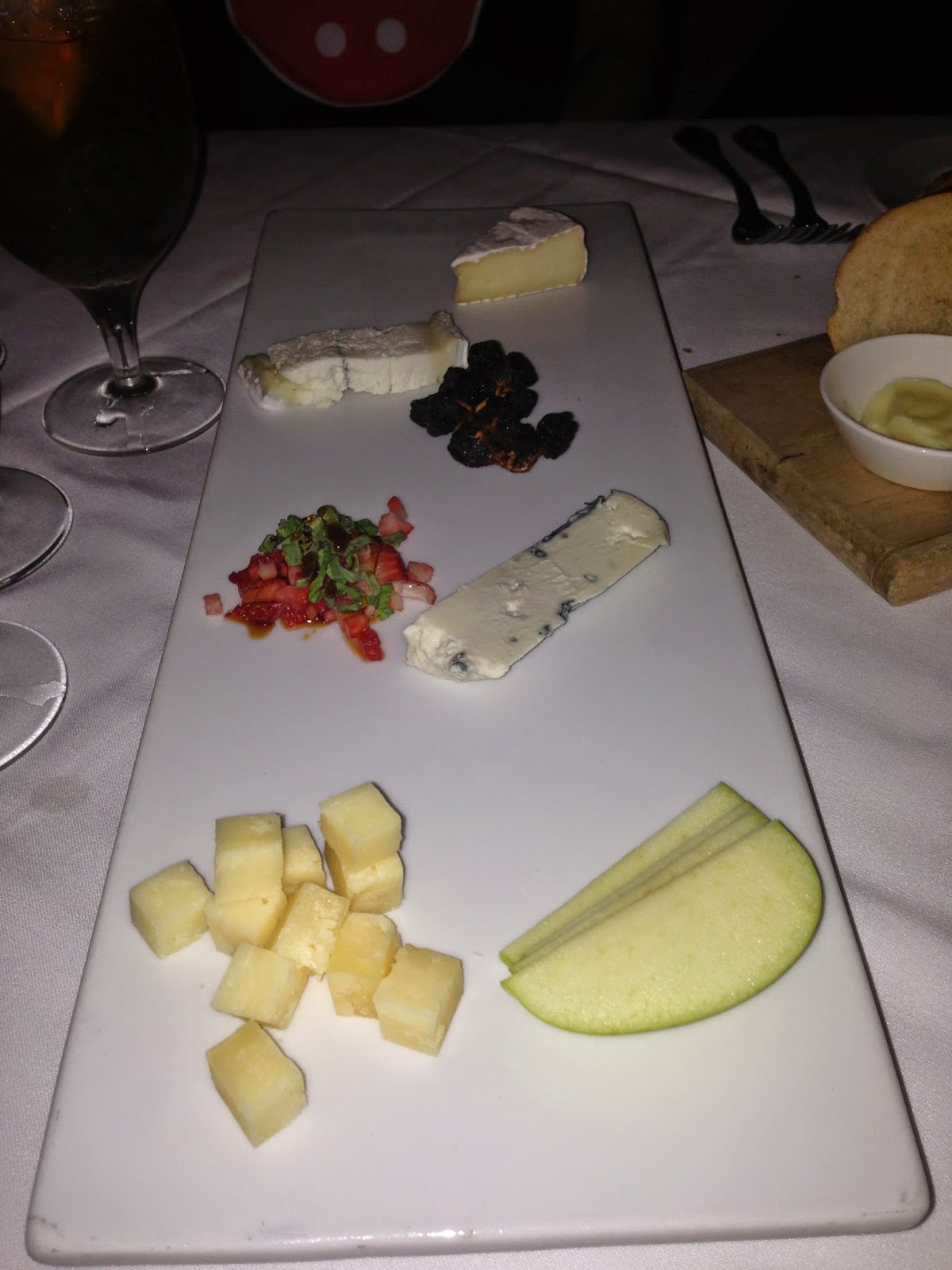 Then I got the Caesar salad, with extra Parmesan Cheese Crisps (we had these at our wedding and I'm obsessed with them). 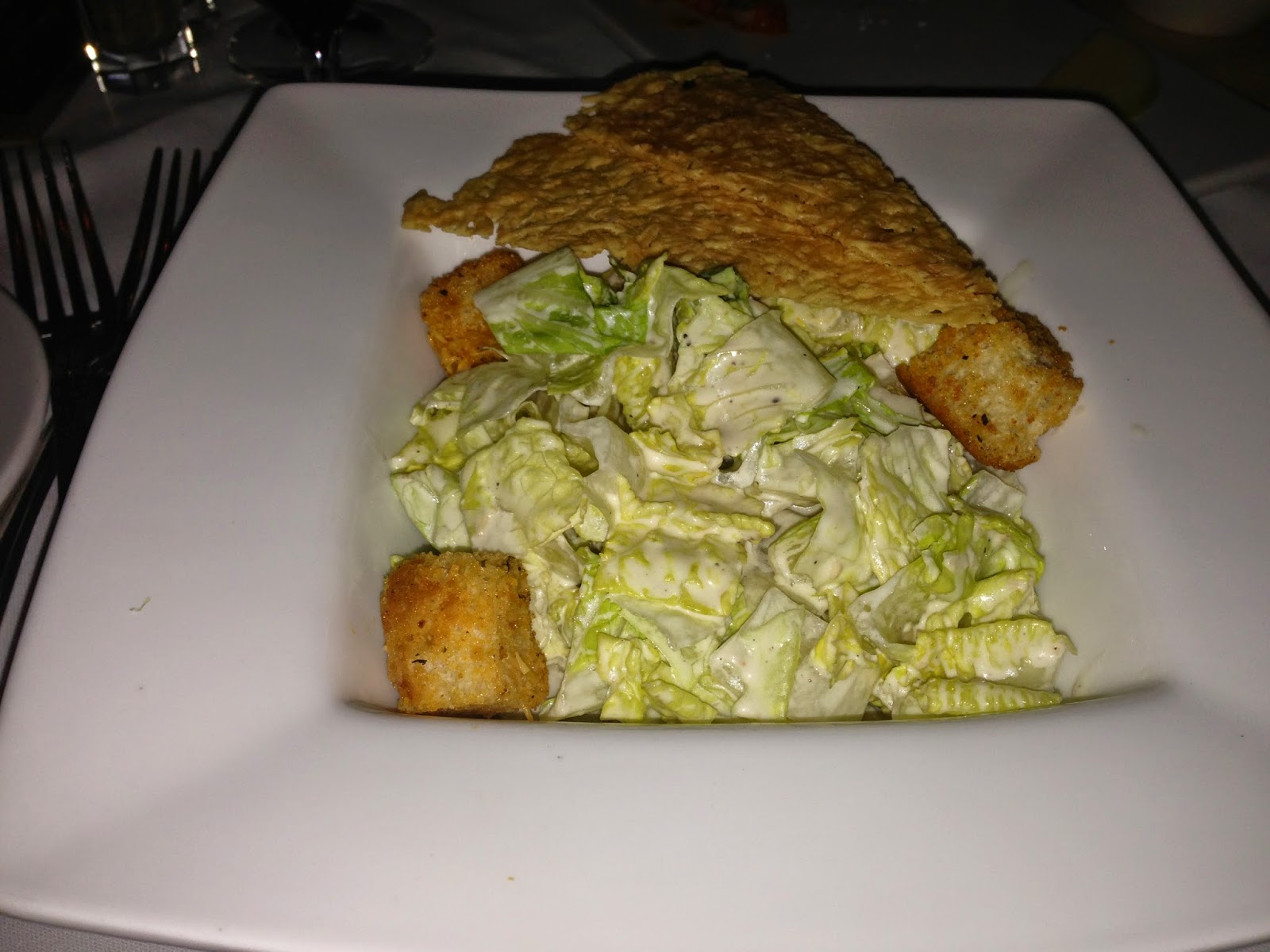 And Kory got the Steakhouse Salad (Bacon, Cucumber, Tomato, Red Onion, and Cheddar). 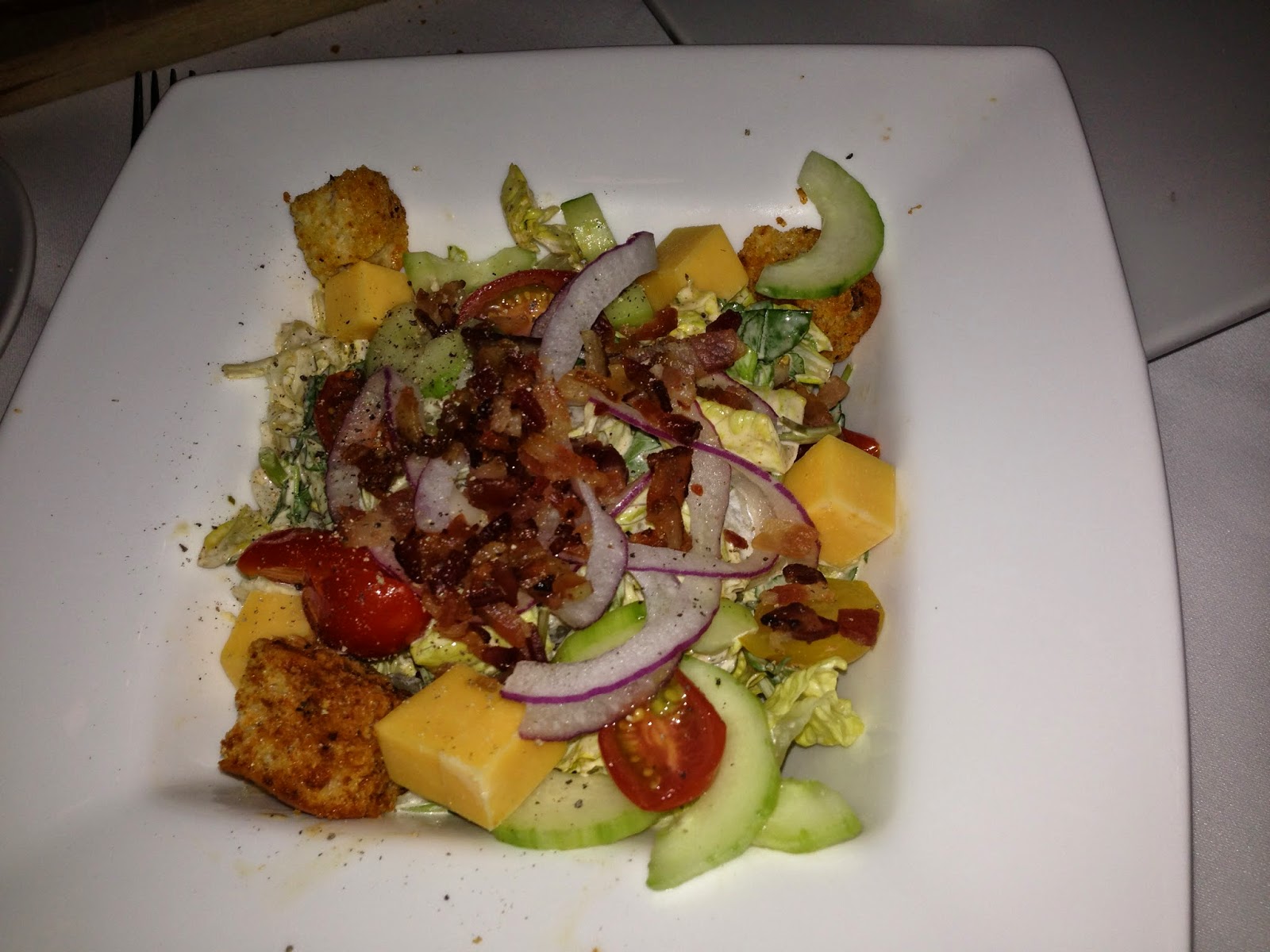 For our main entrees, Kory got the Bone-In Rib Eye with the Signature "Steakhouse 55" Rub (at least, looking at the menu, I think that's what he got.) 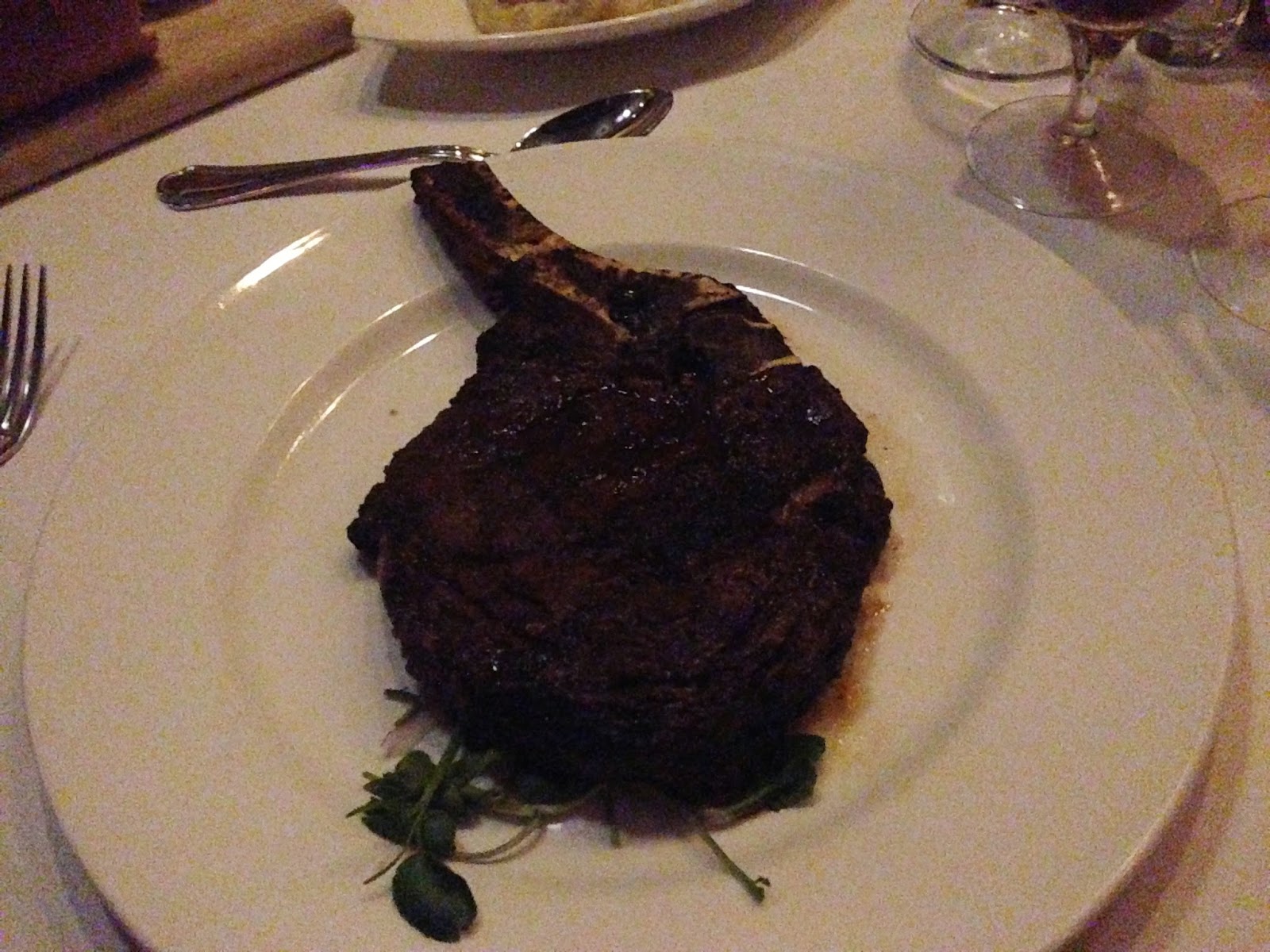 I got the Filet Mignon with Blue Cheese 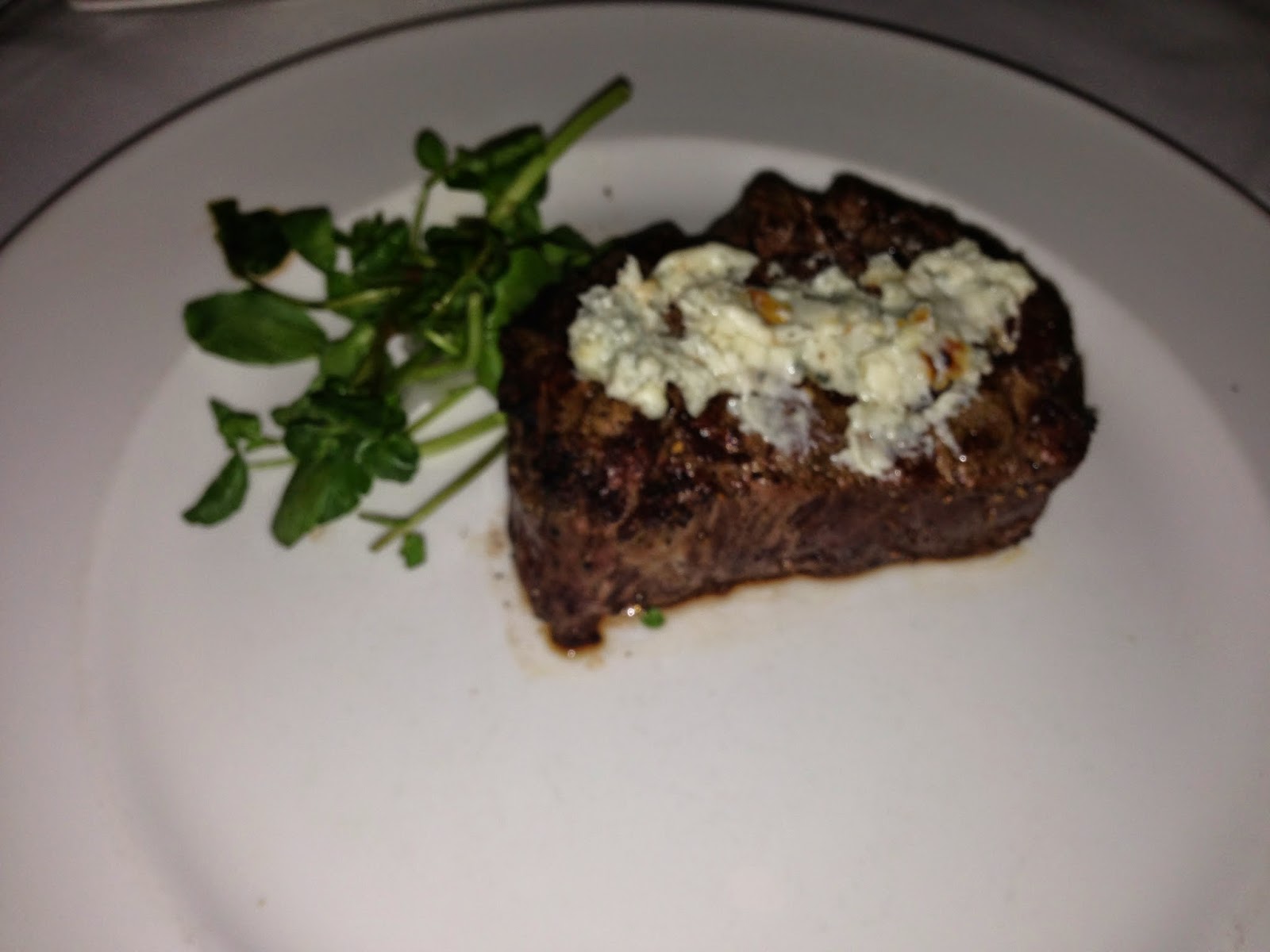 And we split a side of the Yukon Gold Garlic Mashed Potatoes. 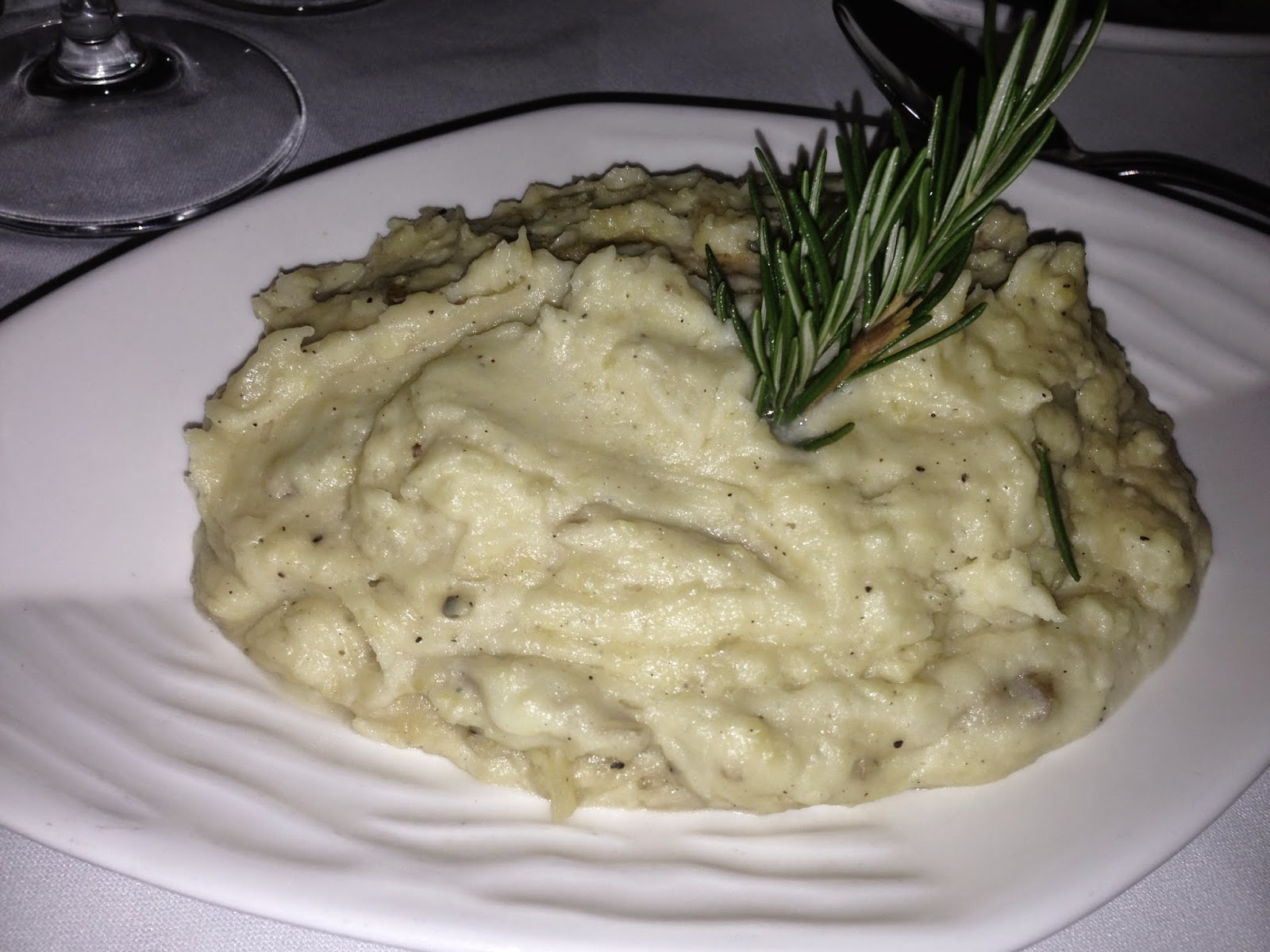 I was so stuffed that I was going to bypass dessert, but our waiter brought out a nice anniversary surprise. 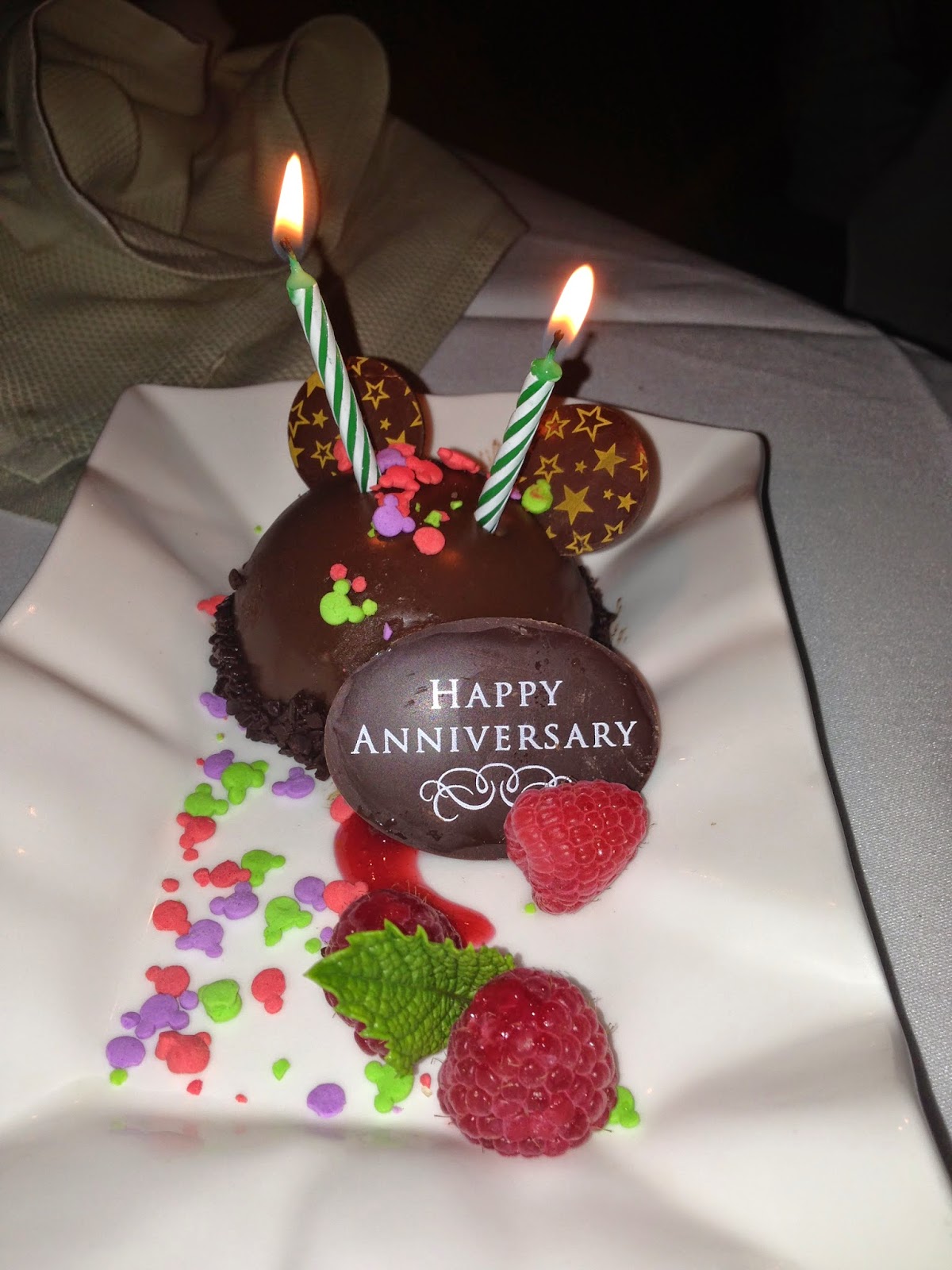 Overall, the food was really good but honestly, the service wasn't that great.  We had shown the waiter that we had vouchers right up front and so I think that's why he wasn't as attentive.  He knew that tip was already included in the voucher so he didn't have to work hard.

We headed back to the hotel room for just a few minutes and got a nice surprise when we walked in. 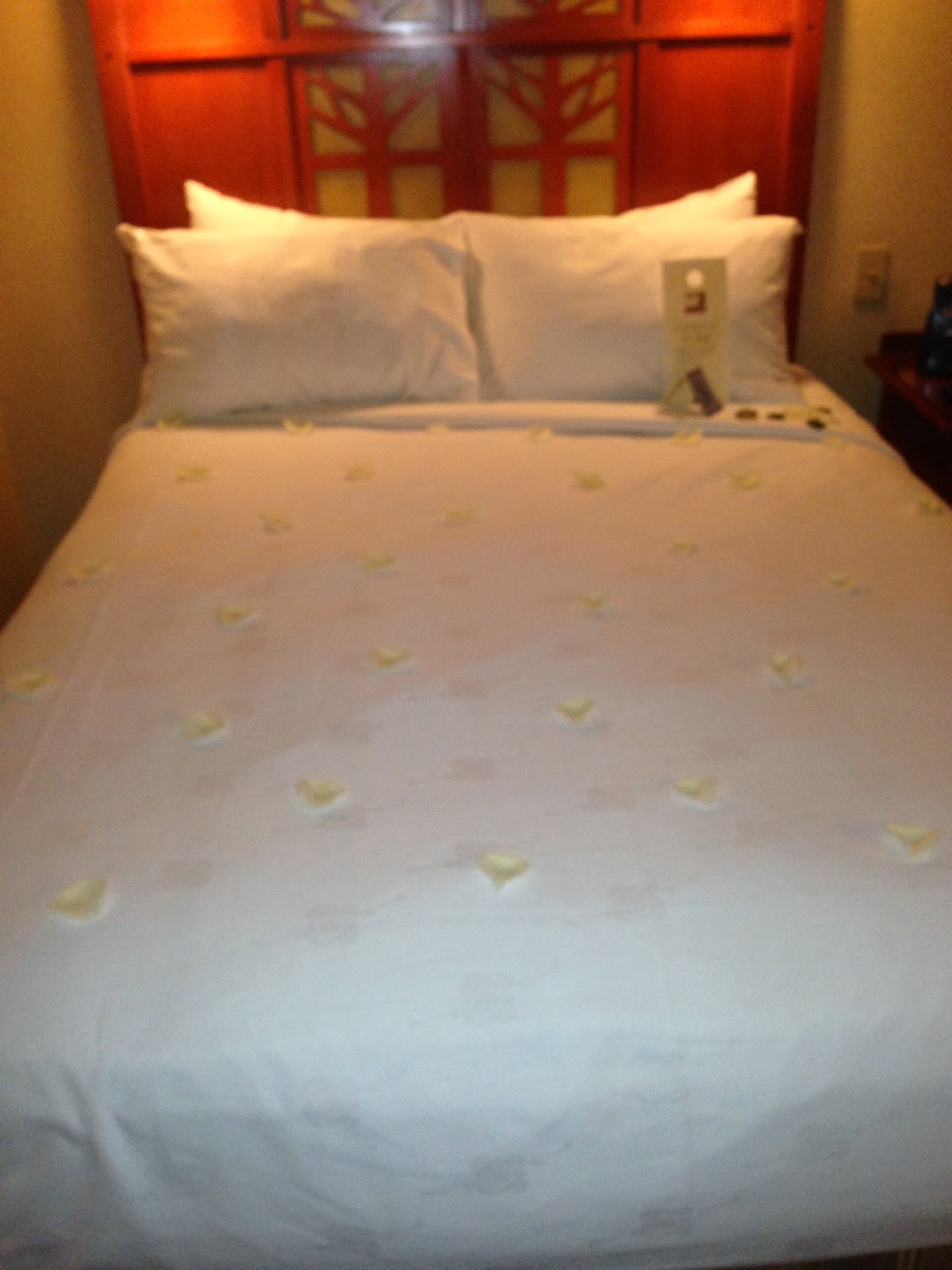 I thought the rose petals from the housekeeping staff was a nice romantic touch.  I'm not sure if they do that for every couple, or just because they knew it was our anniversary.

Then we headed over to Trader Sam's at the Disneyland Hotel for drinks with Kaitlyn, Quinlan, and Dustin.  All former Movie Riders!  (And Kaitlyn and Quinlan live back in Orlando and Kory plays on their volleyball team.  But it takes vacations randomly gone at the same time for us all to meet up.)  I'd been to Trader Sam's last September but we weren't able to sit inside.  I was hoping we'd be able to this time.

Well, once again, it was packed.  There was a line to get into the bar.  And they weren't letting anyone in and if you left, you couldn't get back in again.  It was crazy.  Luckily we were all finally able to get in and got 3 seats at the bar.

For drinks, I have to be honest--I forgot what I got but I *think* it was the Krakatoa Punch (without the souvenir glass.) 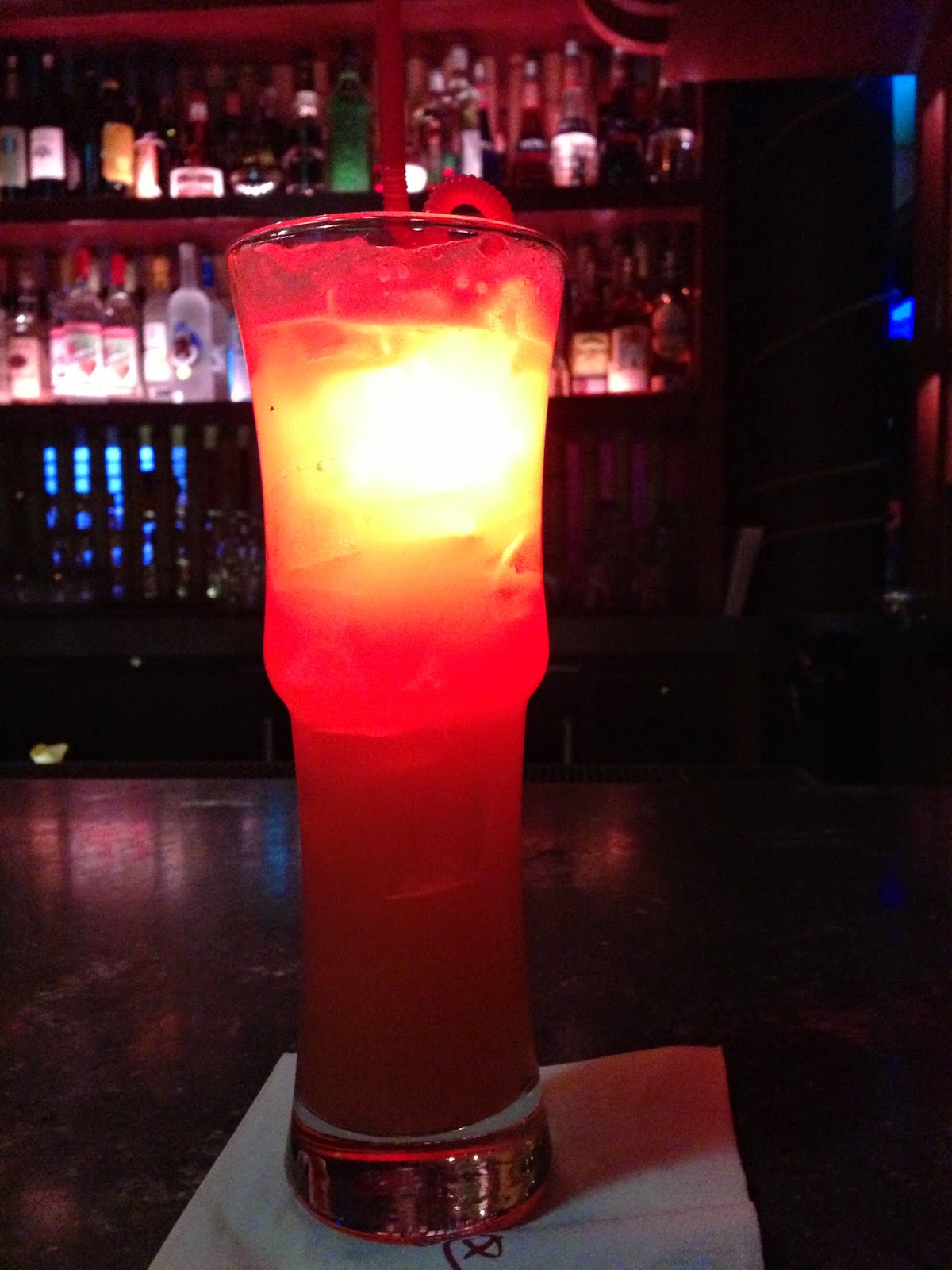 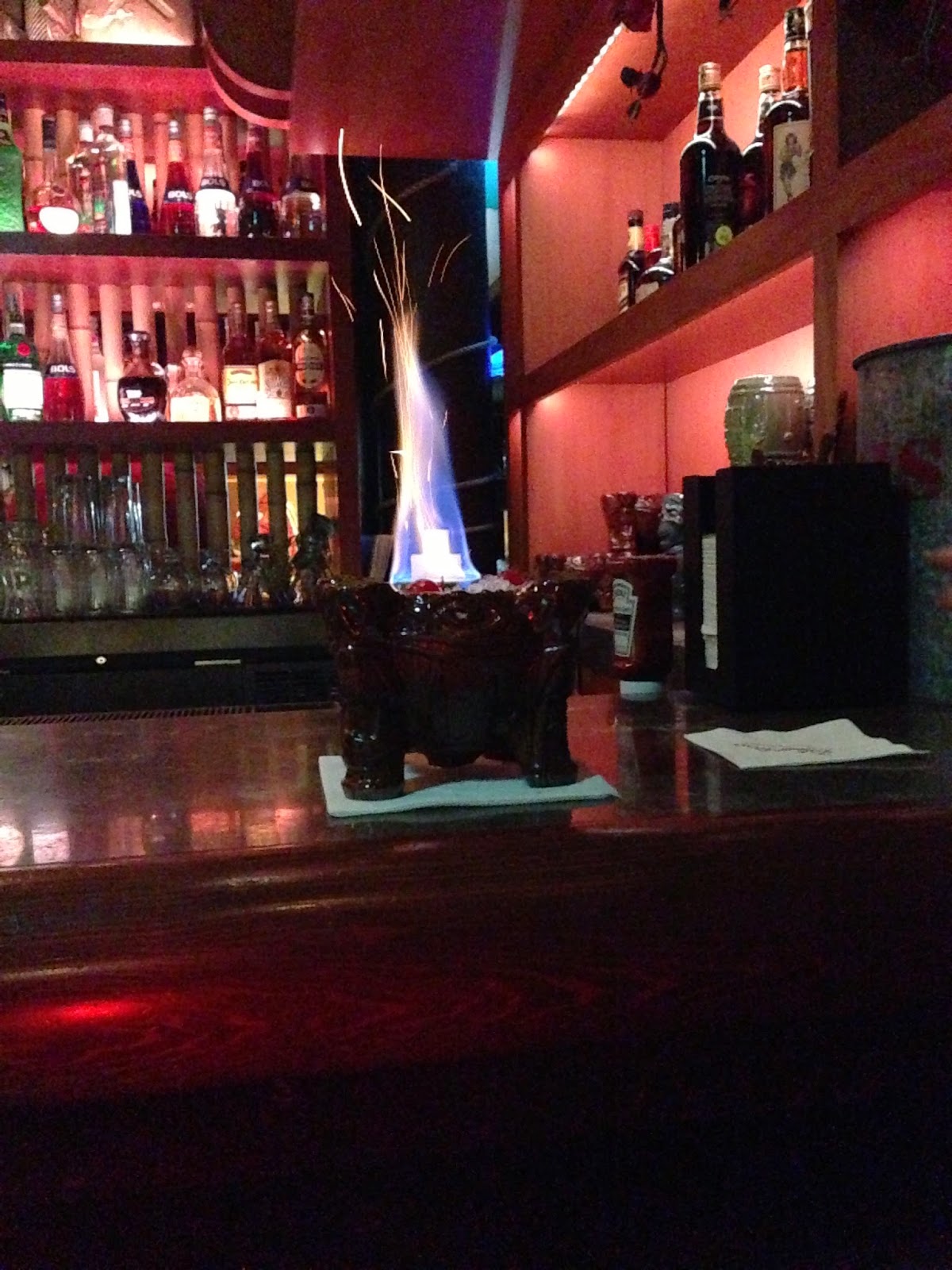 There's cinnamon that you sprinkle into the fire that makes little sparks shoot out.  Fun! 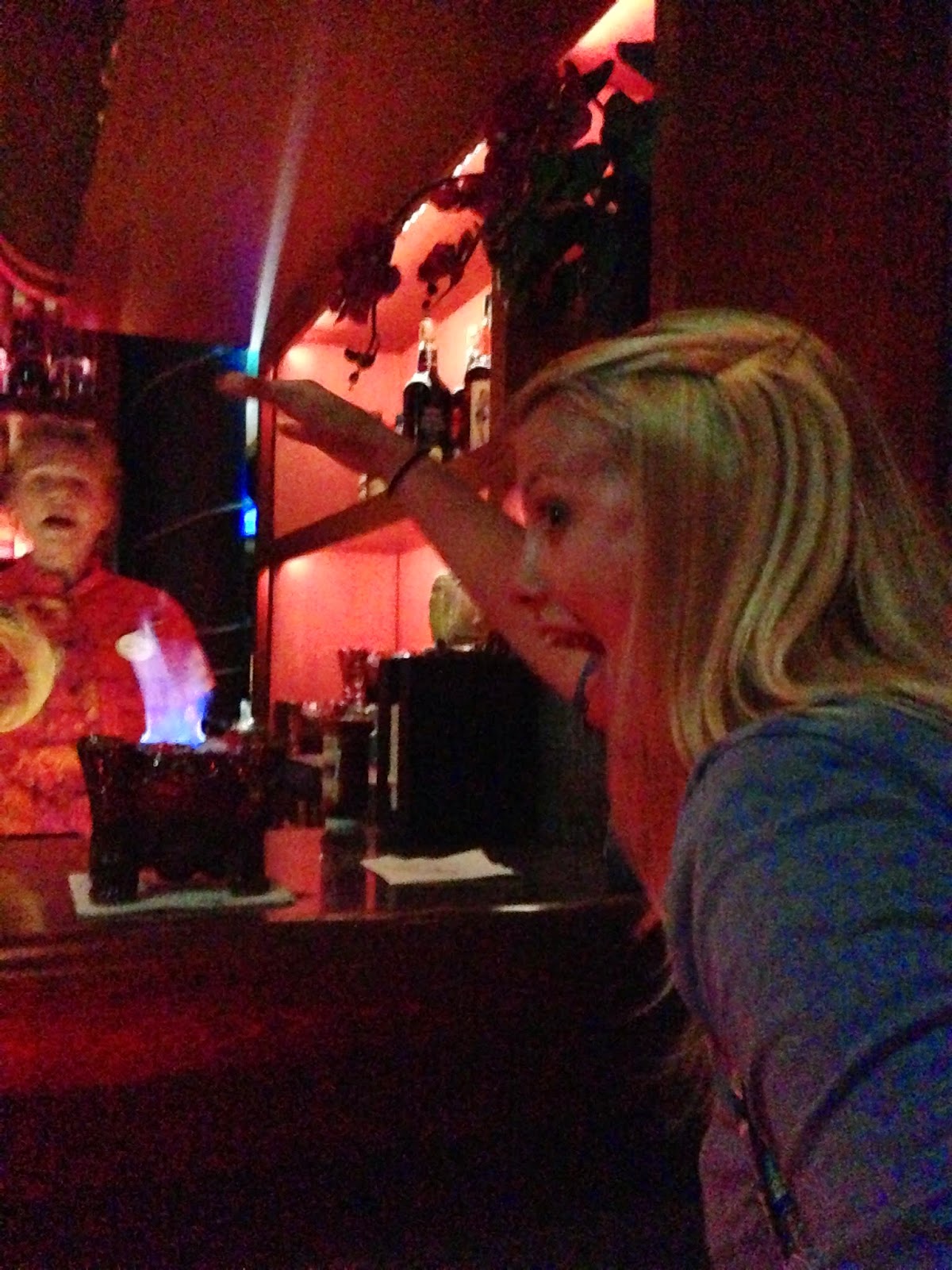 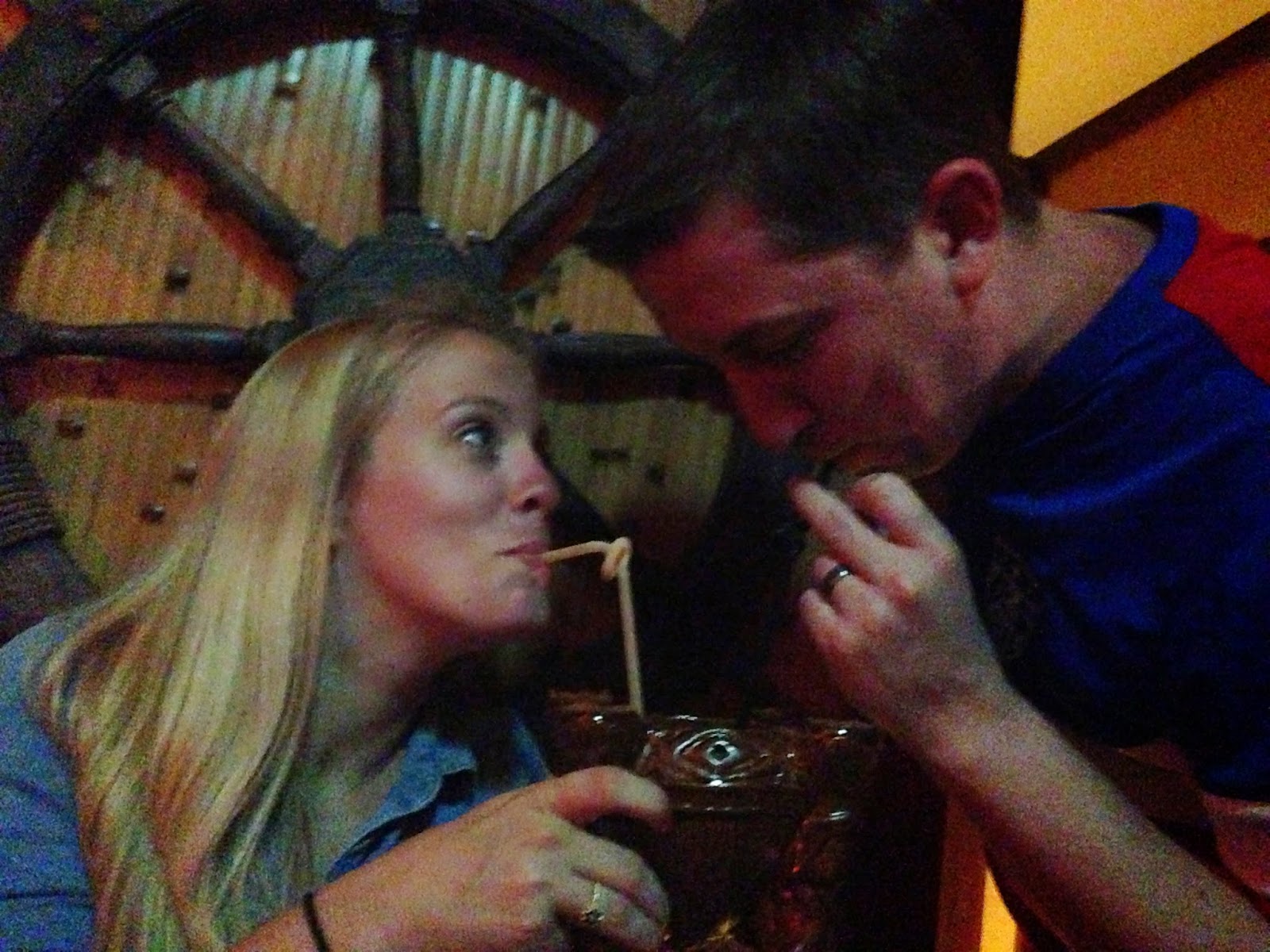 After chatting for a while, Kory and I headed out.  Disneyland was open until midnight and I planned to take advantage of it.  We hopped on the monorail that was in Downtown Disney and rode it into the park. 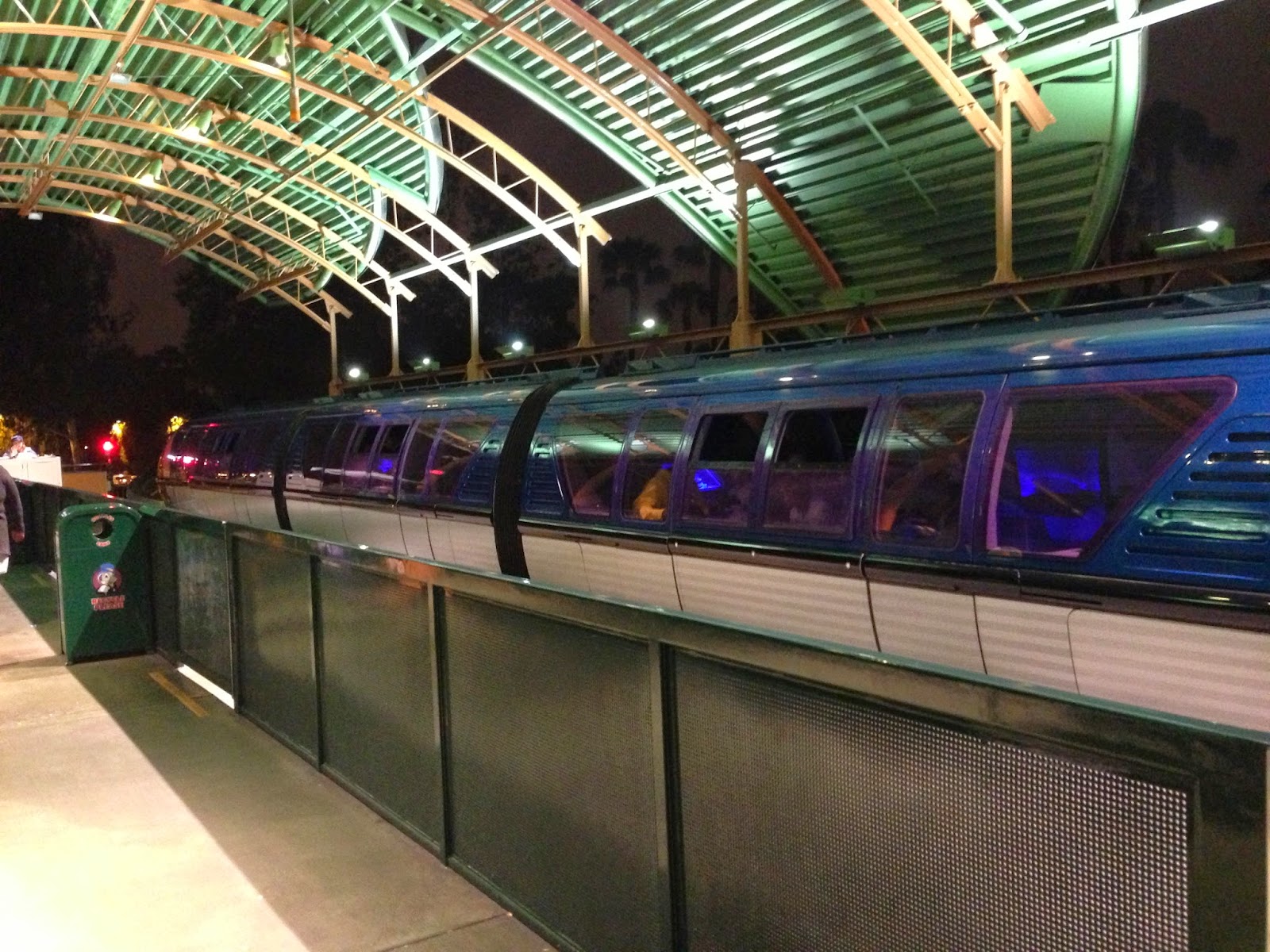 We were able to get in several rides: Matterhorn, Autotopia, Buzz Lightyear, and AstroOrbiter.  One of the funniest moments of the trips was on the Astro Orbiter.  While we were in line, Kory saw one couple fit into one of the rocket ships.  I thought we should each have our own but he thought we would fit.  So it was a little tight getting in.  But the funny part happened at the end.  We got stuck!  Which made us both laugh uncontrollably.  And made it even harder to get out!  I had a split second thought of "Oh no!  What if we really can't get out?!?"  We finally got unstuck but we laughed about that for quite a while.

On the way out, I had to take a picture of the Mad Tea Party at night.  I just love the way this looks when it's all lit up! 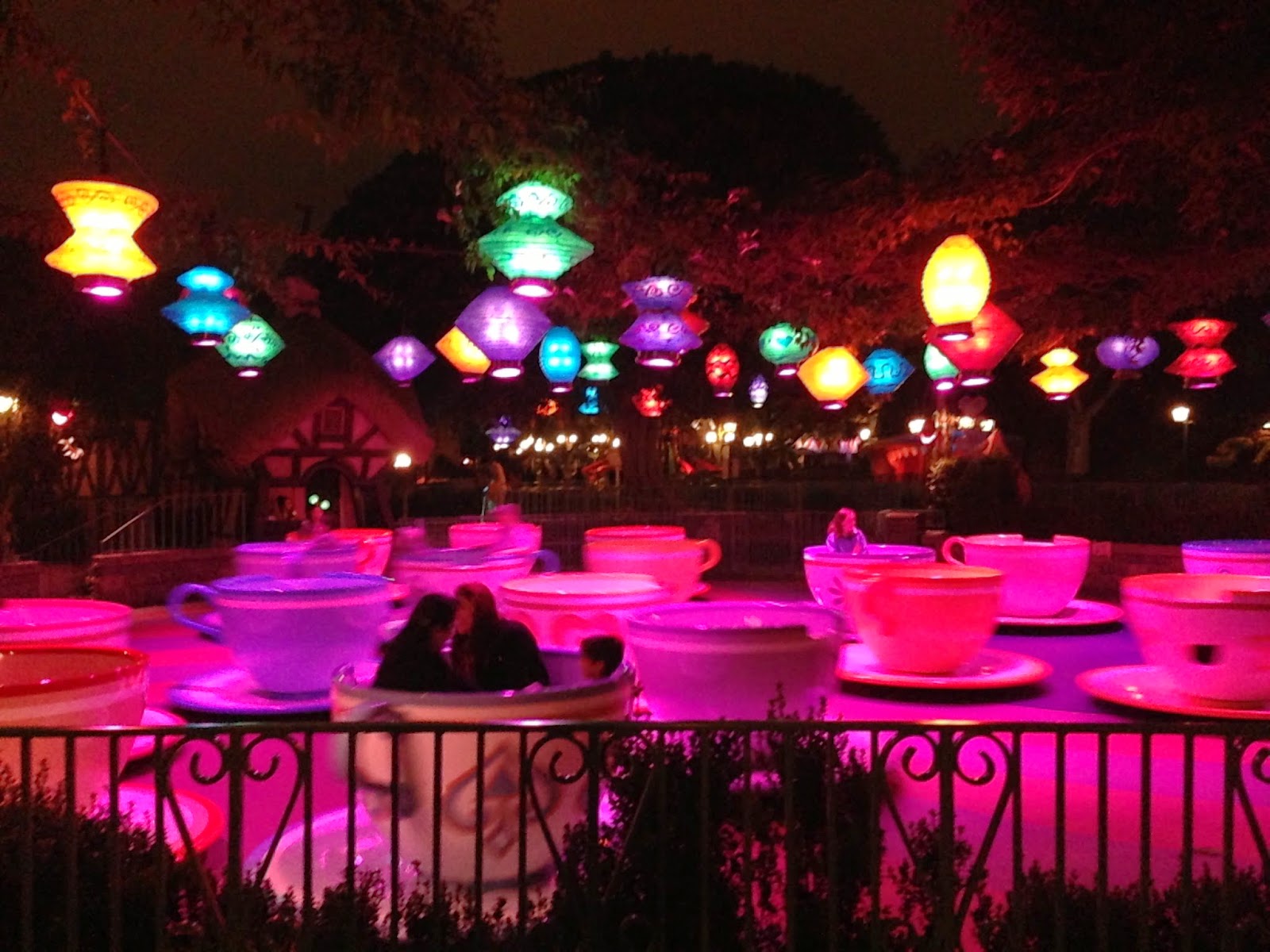 We headed out of the park, stopping at some stores on Main Street first to do a little shopping then called it a night.  I had big plans for our Extra Magic Hours at California Adventure the next day!
Posted by Andrea at 4:54 AM