The Run in the Garden 5k is a small local race.  It's fun because we always see people that we know.    We got to the race at 7:00, about 30 minutes before it started. 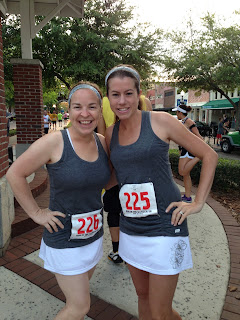 We were on the lookout for Rafael, one of the guys I ran the Castaway Cay 5k with.  We found him pretty easily with his bright yellow shirt on.  Poor guy--his calves were still hurting him from that race! 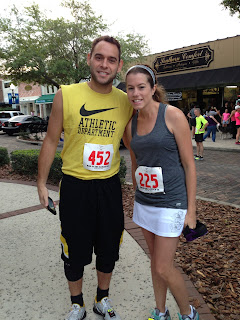 We met up with a fellow teacher, Jennifer, who we saw at the Winter Park Road Race 10k. 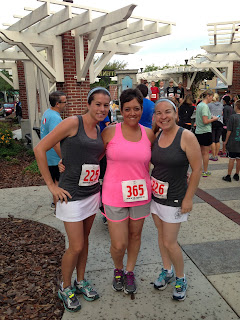 I was looking for my favorite little first grader (I had her last year), Ella, who was running the race with her mom.  Her mom is an awesome runner--I aspire to be that good one day, and she's on her way there already.  She kicked my butt! I ran behind her and her mom for most of the way.  She's fast and won second place in her age division!  She's so cute and I was so excited to see her..I adore her! 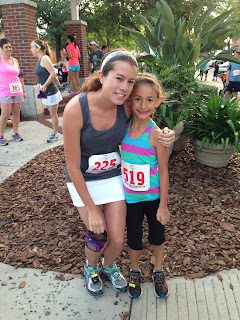 Cori also saw one of her former kiddos, Carson 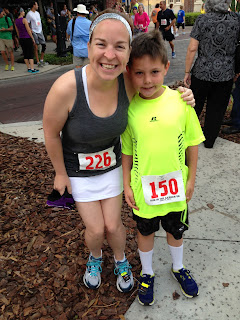 We lined up at the start with Jennifer, Ella, and her mom.  Once we started, I couldn't get my RunKeeper app to work, so my time was a little off.  We had decided before the race since this was actually chip timed, that I would go on my own after the first mile to see if I could PR.

Cori stopped at 1 mile to start our 2:1 intervals but I kept going until 15 mins and then started the intervals.  I felt pretty good for the race and honestly, having Ella and her mom ahead of didn't let me slack off.  My runkeeper time said 29:51 with a pace of 9:28 (but unfortunately, my official pace was slower than that).  But it was still my fastest pace ever.  When I got done, Rafael was waiting for me. 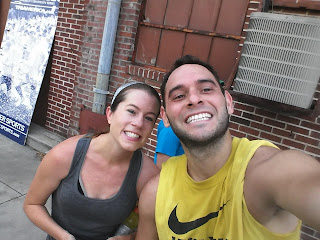 After the race, we saw a guy with an American flag and a tire that had "For Boston" written on it.  We asked what the tire meant and he said that it was a "good year" (which I didn't get given the events last Monday.  If anyone can fill me in, that'd be great!) 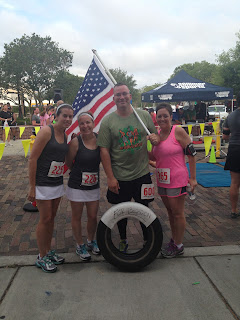 We also ran into another teacher from our school, Kimberli and her husband and daughter (who will be starting Kindergarten next year--so cute!)  We had to take a teacher pic! 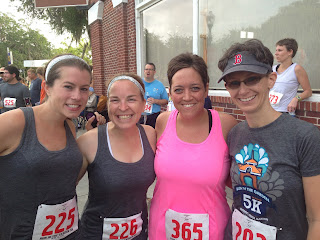 So here are the stats according to RunKeeper, although I know they're a little off.

I also got this funny email from RunKeeper that I've never seen before.  The subject said "Busted! You've been cited for a moving violation!"  I thought it was weird but since the sender was RunKeeper, I opened it up. 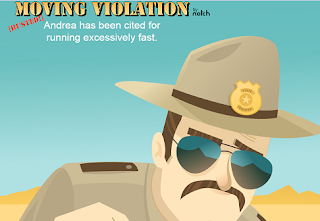 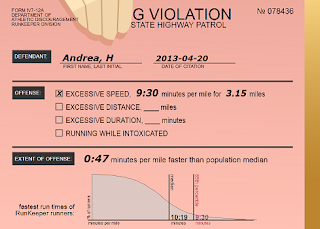 I'd never seen anything like this from Runkeeper before and it cracked me up!