When we were first deciding which cruise to sign up for, I picked the 4 day Disney Dream because I wanted to run the Castaway Cay 5k.  Yes, maybe a silly reason but I wanted to check off another runDisney race off my list!

The boat was docked at Castaway Cay on Tuesday.  Monday night we got the Navigator, the daily schedule, for the next day.  We were to meet at Evolution lounge at 8:15am.  Kory was going to run it with me (he's never run with me before!  He ran before we started dating and ran the WDW Marathon shortly after we started dating and then stopped running.  So besides all the sports he plays, he hasn't run in over 6 years.)  Another friend couple was running with us.  Natalie ran the Princess Half Marathon, but Rafael had never run a race.  What a race to choose as your first one!

We met in the lounge at 8 to make sure we weren't late.  There ended up being a good amount of runners there.  I'm HORRIBLE at estimating but maybe 60-75ish runners?  There was a wide variety of runner types--super competitive to walkers.  They showed us a map of where we were running.  We were to run down to the bike path, run the circle bike bath, down the air strip, back to the bike path, around it again, then back to the starting line.  I had read on the Disboards that it could be confusing so I tried to pay as much attention as I could. Then we got in line to get our bibs.

After everyone got their bibs, we headed out.  I had to get my pre-race picture of course.  And one with Kory since I doubt that'll ever happen again!  Oh, and yes, I'm one of THOSE girls.  I have to have a cute new outfit for each race.  (what's wrong with wanting to have fun while running?).  And I had picked up the perfect island running outfit at the Princess Half Expo--the Mermaid shirt and skirt by Raw Threads.  Love it!! 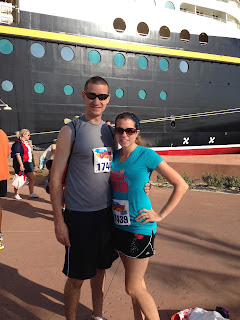 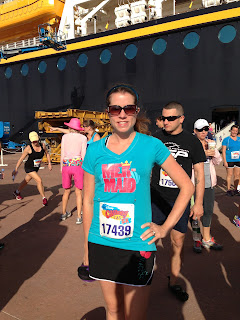 Then we walked to the race starting line.  It wasn't too bad.  About a 10 minute walk. 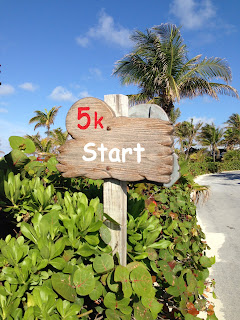 I had read two good bits of advice about the 5k shirts that you can buy.  One was to buy it before the 5k since sometimes they have a very limited supply, especially in the smaller sizes.  So I did that right away.  They had no smalls, 2 mediums, and only a couple of large and extra larges.  I asked them if they had any smalls and they said no so I went ahead and bought a medium.  The second bit of advice was to go back later to check sizes.  So I checked again that afternoon, and sure enough, they had 2 smalls!!! So I exchanged my medium for a small.  If you do want a shirt, I would definitely buy one in the morning and if they don't have your size, make sure to check again in the afternoon.  And please excuse the wrinkled mess of the shirt.  I forgot to take a picture of the shirt until just now and it's been crammed in my bag. 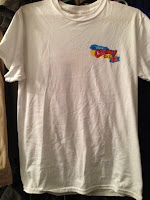 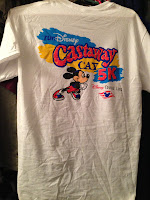 We had to get a picture of the four of us before the race. 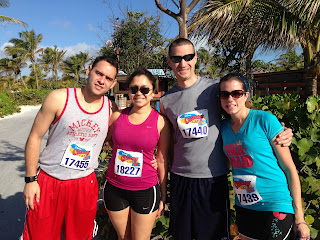 Then the race started!  This was probably the toughest 5k I've run yet.  Strictly because the GPS wasn't working on my phone and there were no mile markers so I had absolutely no idea how fast I was going our what my pace was.  Rafael shot off.  Kory took off pretty fast and I tried to keep up with him.  My goal was to try to run the whole 5k but I went out too fast.  Boo!  I had to tell Kory to go ahead without me and at 10 minutes, I stopped and started my 2min run:1 min walk intervals.

By the time I got done with the circle bike path the first time, this 14 year old girl came flying past me headed back into the circle for her second time.  So fast.  And Rafael was right behind her!  Right at the turn around point, I caught up with Kory.  We ran together for a couple of minutes, back into the bike path.  But then he tired out and I continued running my pace without him.

Luckily most of the race path was well marked.  There was one point that I got confused on which way to go, along with two other guys.  We all stopped, looked around and then decided to try one way together.  It turned out to be the right one.  Rafael said that he and the girl took a wrong turn.  They went down this turn towards a fishing dock.  When they turned back around to go the right way, the girl took off.  At this point a couple of other guys passed Rafael.  The girl ended up getting first place and Rafael ended up getting ninth.  Not bad for his first race.

I was the second one of our little group to finish.  I forgot to stop my phone after I crossed the finish line, but after I got my medal and went to sit next to Rafael, it said 30:57 so I'm estimating I crossed at about 30:30.  This was a new race PR for me of about 1 minute and 4 seconds (if it was a true 5k).  Yay!  AND I beat Kory!!  He finished about 5 minutes after me.  We hung around and cheered for Natalie to get her medal.

And speaking of which, yes the medal is plastic (even cheaper than the ones you get during regular runDisney 5ks) but I was so excited that we actually got one!  It will be hanging proudly on my medal rack. 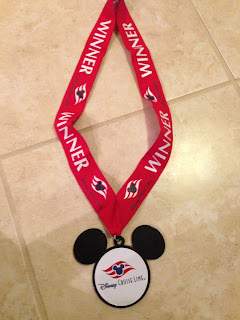 I had lots of fun and will definitely do it again when we go on our next Disney cruise! 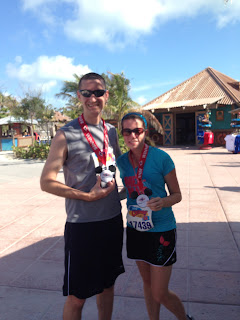