Cori and I have been wanting to to run in a color run for a while, ever since one of our friends did one up in Virginia.  So when we saw the Color Me Rad 5k for Orlando, we knew we wanted to do it.  Unfortunately, we procrastinated too long and it sold out!  Then last week I checked the site and saw that there was one in Jacksonville for this weekend. Since my parents live right outside Jax, and I had to drop Bella off since we were going on the cruise, we decided to sign up!

It took us a while, but we finally came up with the team name of Rainbow Connection (since I love when they play that at Jellyrolls).  But honestly, I didn't see our team name ANYWHERE.  Oh well.  Cori loves to make bows and since we didn't want to wear a Sweatyband so it wouldn't get messed up, she made us a Kermit one.  Of course we had to wear white so we got a white shirt (that was too see through so we also got a green tank top for underneath) and green pants. 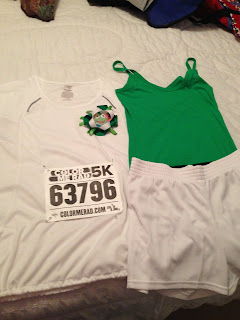 We weren't able to make it in time to pick up our race packets on Friday, so thankfully my dad picked it up for me.  We got a cute shirt, sunglasses and a RAD tattoo (which I forgot to get a picture of). 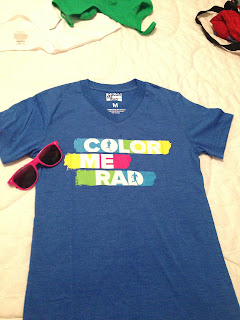 We set our alarms for 6am.  I didn't sleep well because Bella was antsy all night looking for Kory since he stayed at home.  Finally we left at 6:30 with my dad and headed downtown.  Unfortunately, on the way, we saw a horrible accident.  A car had flipped.  So scary.

It was freezing outside!  We hadn't planned for that!  We are used to Disney races, which are really crowded, and this one was pretty empty, comparatively.  We were supposed to run in the 8:20 wave, but we asked if we could go in the first one and they didn't have any problems with it.

We were all nice and clean before the race. 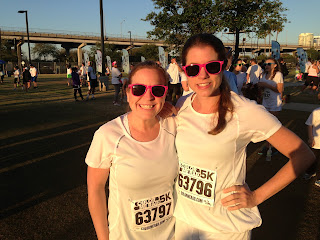 We lined up and the guy spoke on the speaker some, trying to get the group pumped up.  The people in the very front could hear him, but we couldn't tell what he was saying.  They threw some free things like shirts and hats out and threw some color things into the air but we didn't get any on us.  At eight, they started the race, but after a small group went, they stopped the rest of us.  We guess they only let small groups go at a time so everyone gets a lot of color. About 5 minutes later, we took off. 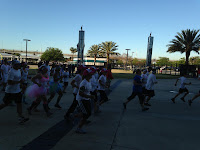 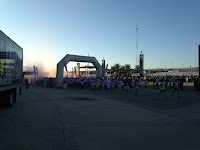 We ran into the stadium, thinking we were going onto the field.  Nope, we were running up the ramp!  So we think, okay, one ramp's not bad...then two's not too bad...then nope, we're walking.  I think there were six ramps up.  And we ran up one side, then down, then back up the other side!  So up 12 ramps!  I was not prepared for that and you could hear a lot of people commenting on it.  And there wasn't any color during those parts because they didn't want to get the stadium dirty.

Then after we went down the second time, we got to go on the field.  It was so neat!  My family has had Jaguars season tickets since the franchise started so it was neat to see it from this view.  On the field, they had these things that looked like the things that bug exterminators have.  In it was green paint (or it was wet anyways).  We got our first color!  Then we ran through the practice field.  Another really neat thing to see!  The course was really pretty empty--so empty, that we found my dad standing on the side of the course all by himself.  So we ran up to him for a picture. 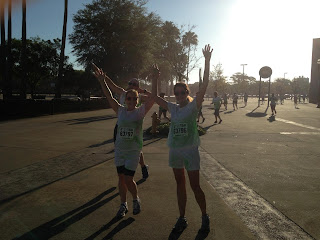 And I just noticed the guy in the back photo-bombing our picture! We don't know him and there was no one else around my dad so the guy totally knew what he was doing. Hilarious!!  We took off for some more paint (This is where a girl through a huge handful at Cori--the rest of the paint was powdery). 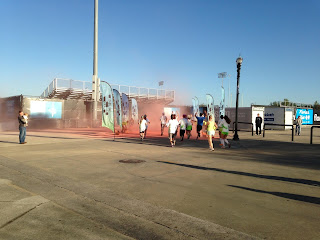 There were several more areas like this.  I remember during the purple one, there was so much paint in front of me that I couldn't see at all and hoped that no one was in front of me.  I know some people had mentioned breathing the powder in being a problem, but we just held our breath and were fine.

And then we rounded a corner and it was over.  There was no big notice that it was the finish and we noticed afterwards that the big blow up arch thingy says finish on the wrong side.

At the end, you can pick up one powder packet so I got pink and Cori got blue.  We decided to through it up in the air for a little fun.  My dad got it on video.


Notice where Cori aimed her powder...right at my face!


We were COVERED in paint! 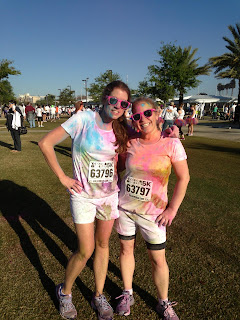 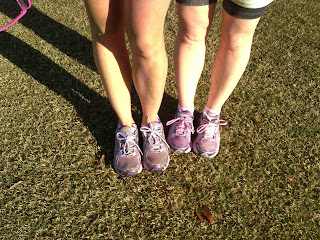 Cori's face looked like confetti (see below).  Mine didn't look that bad. 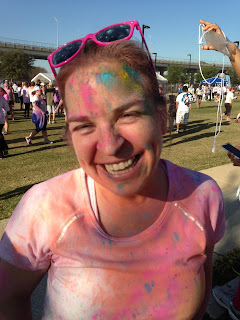 Overall, it was fun but we wouldn't do it again.  For one thing, we're pretty sure that it was less than 3.1 miles.  But we have no clue since there were no mile markers at all.  Nor was there any kind of clock.  I know it's a fun race but it would still be nice to have.  We figured that we took about 32 minutes to run it (we know the race started at 8, and we think that our group had to wait about 5 minutes to start. Then after we finished, we finally found a guy who was wearing a watch and he said it was 8:38).  And while we normally run a 32 minute 5k, we walked way more at the beginning due to the ramps that we normally do.  We did like that the course wasn't so crowded.  It was nice not to have to bob and weave or have people running over you.  But it just seemed a little--chaotic and unorganized.  We're glad we did it once though!