We woke up early to head to the corrals, but it was already packed.  When we got there, the D corral was full.  As in, there was no more room at all.  How does that happen?  They shuttled us down the side, which we thought was to head to the back of the corral but the line stopped moving and we were pretty much stuck.  Here you can kinda see the crowd going down the side before we got in. 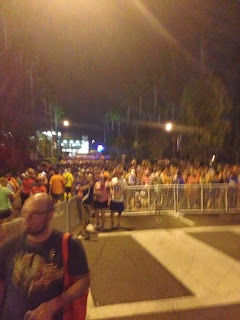 We were doing a very (very) loose interpretation of Alice in Wonderland.  I was Alice, Suluh was Queen of Hearts and Cori was the Mad Hatter. 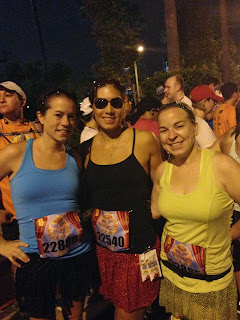 Here you can see where we were stuck. 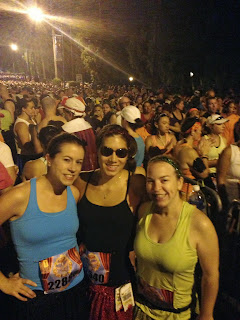 We ran through the parks first which was a little sad because we knew the rest of the course was off property.  First up was California Adventure. 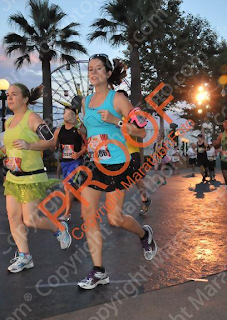 Then over to Disneyland. 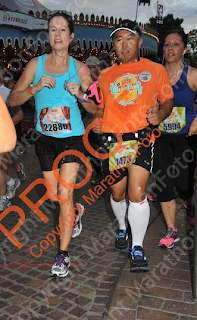 I love running through the castle!! 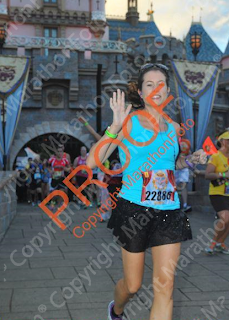 Then by about mile 4, we were done with the parks.  We turned down a street in Anaheim and I was so glad to have my sunglasses.  The sun was brutal!!  There was lots of entertainment on the streets.  But it just made it feel like a local race.  I mean, I get that Disney can't have the characters on the streets.  I KNEW that beforehand.  But I'm so used to seeing the fun Disney stuff even on the roads at WDW that this didn't feel as special to me.
There was also one place that was gravel/dirt.  And a pretty steep cliff to the side with no railing.  I'm surprised no one fell off!
We did get to run through the Angels Stadium which was pretty neat. 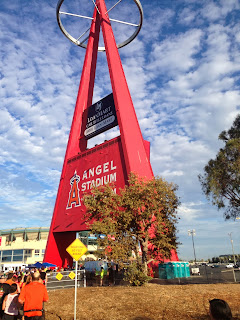 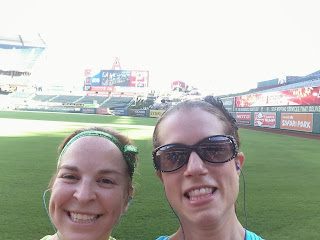 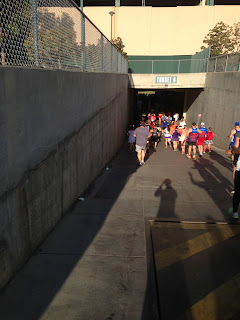 At about mile 10, my heel started hurting which was weird.  I'd never had heel pain before.  I started having shooting pains every time I stepped and then the bottom of my foot went numb.  The first thing I thought was that I had a stress fracture like my friend Justin (Always Running Forward) did.  (Luckily, it turned out to be fine.)
But I didn't let that slow me down.  I was on a hunt for a PR.  I had figured out earlier that we should be able to get it.  Unfortunately, we were 10 seconds off. 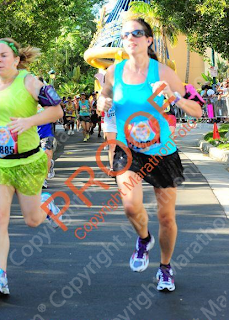 But we pushed it to the end and finished!  This is my finish line photo.  Really Marathonfoto?? Nothing with the finish line banner in it?  (And once again, I'm stopping my watch.  I need to stop!) 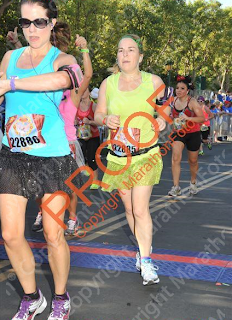 Anyways, we got our Disneyland Half Medal then headed to get our Dumbo Medals then our Coast to Coast medals.  I didn't take any pictures of them until we got back in the room.  I just wanted to find some ice, get our medals engraved and sit.

Overall, I think we did pretty well.  I know a lot of people complained about the weather, but it didn't bother us at all.  I think training in the Florida summer helped a lot. 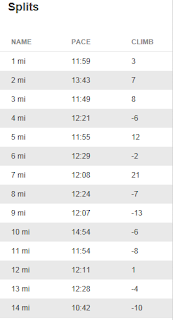 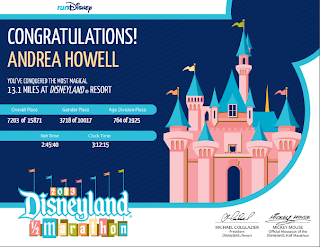 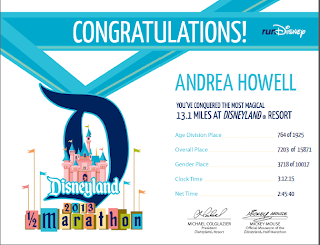 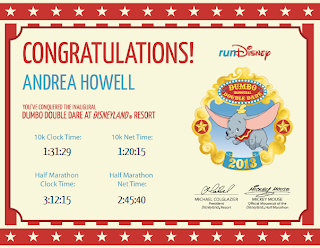 I enjoyed the race and want to someday do the Tinkerbell Half.  But I definitely prefer the WDW races.
Posted by Andrea at 9:16 PM