I was excited to run in the Tour de Pain.  3 races in 24 hours was a great challenge. (well, 4 if you count the fun run we did on Sunday!)  I was running all of these with my friend Kristin (A Mom on the Run) from high school.  Her hubby and brother were also running the Tour de Pain.

I was ready with all of my outfits (and Bella supervising). 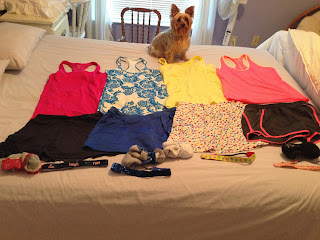 First up was the 4 Mile Beach Run.  I was a little unsure of this one.  I'd run on a beach once before and I remember being sore the next day.  I was wishing this was the last race instead of the first.  And since I had no idea what effect the beach run would have on me, I didn't really have any goals at all for any of the races.  I wasn't even sure if I was going to run the 28 minutes that I had been getting up to, start off right away with my 2:1 intervals, or somewhere in the middle.

We got to the race and lined up on the sand.  The tide was pretty high and we think that's why they didn't use the chip time, but instead used a gun time.  They also decided to start a few minutes early (which I think is weird.  How can you start a race early?  And it turned out that Kristin's brother was a few minutes late.)

Anyways, we took off and Kristin and I ran the first bit together but she slowly started to pull away.  I didn't want to slow her down since she's quite a bit faster than I am so I let her go.  I ended up running for about 18 minutes before stopping and doing my 2:1 intervals. 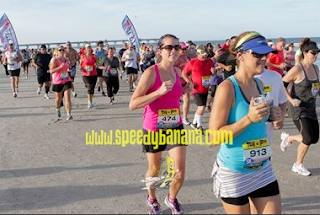 Kristin didn't realize that I had slowed down until after the two mile mark so she stopped and stretched some and waited for me to catch up.  Then she did the intervals with me. 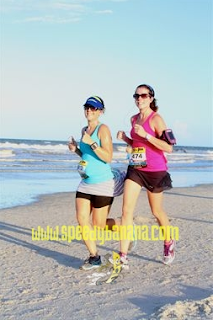 We kept our eye on the boardwalk since we knew that we didn't have to go past that.  But it sure seemed to take a while to get closer!
﻿ 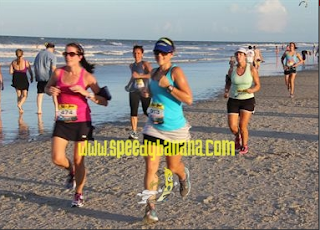 We saw the finish line and took off. 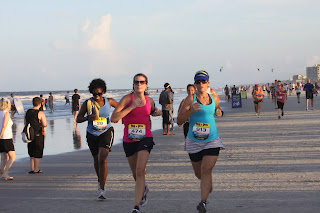 So I realize that I need to find a more graceful way of stopping my watch. Apparently I just look silly when I do it.  Kristin looks so much better crossing the finish line. 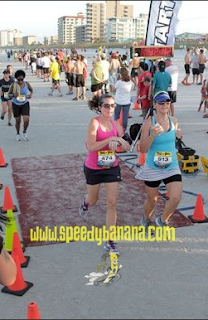 We finished at the same exact time, then Kristin's hubby came in next, then her brother.

I came to the realization that beach running is hard because you have to pay attention to your steps.  I wasn't sore the next day, but it took a lot of focus and my ankles were wobbly.  I don't think they announced that there was going to be a run on the beach because there were still lots of visitors so we had to run around sand castles, holes, and beach chairs!  I'm not sure I'd do another beach race.  It wasn't as bad as I was expecting and the ocean was beautiful, but I think I'll stick to the regular roads.

After the race, I realized I hadn't gotten  pre-race picture like I normally do, so I asked Kristin's hubby to snap a picture of us.  Apparently he has the same humor as my hubby does, because here's the picture I got. 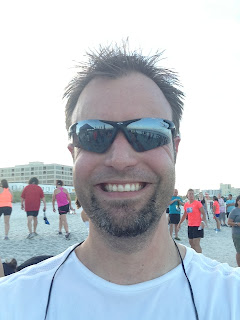 Yes, Adam, I thank you for your smiling face :)
Adam then took real picture of us.  The ocean in the background is just gorgeous! 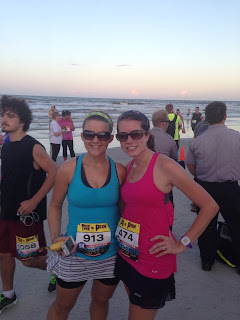 My only real complaint is that there was only water to drink after the race.  And since I don't drink water, I didn't have anything until we got to the car.  They did have really yummy cookies though!

Here are the stats from Runkeeper 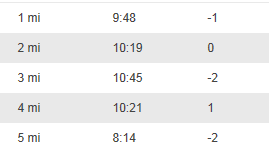 
We stopped for dinner and then headed home.  We had less than 11 hours til the next race.
Posted by Andrea at 9:24 PM