I woke up early the Saturday morning expecting to be sore from the 4 mile beach run the night before but I wasn't.  I headed over to Kristin's bright and early and we drove to the Tour de Pain 5k with her hubby and brother.

Once again, I didn't really have any goals.  I wanted to try to run the whole thing again but wasn't sure how my legs would feel once I got going. 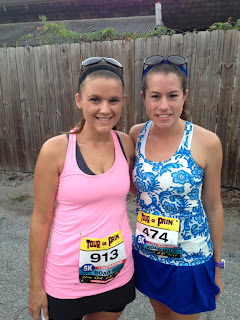 Kristin and I lined up a little ahead of the boys.  I knew that I wasn't going to stay with her because her 5k times are a lot faster than mine (and she even got a 1 second PR!!).

We took off and I realized I was tired but not that bad.  I could run the whole thing! 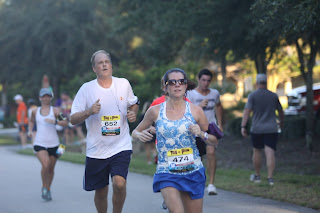 I was ahead of the boys for a while but then Adam and Damian passed me by.  I was okay with it though.  I kept them in my sights.  They had told me a story the night before about how at one of the races, Damian had stayed right behind Adam and at the VERY LAST SECOND stepped ahead of him to beat him by 1 second!  I thought about trying to do that with one of the guys but decided I couldn't keep up.  (I did end up passing Damian again because his knee started bugging him).

We came around a corner and I knew it was almost the end (I think this was the corner, but maybe not).  The course was nice and shady which was a relief.  (One thing I realized.  I look horrible when I run!  Apparently I run with my mouth open.  What was I doing??) 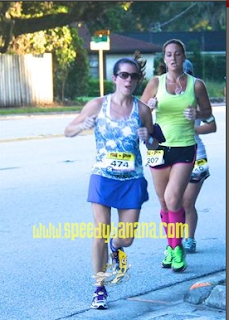 And I was done! 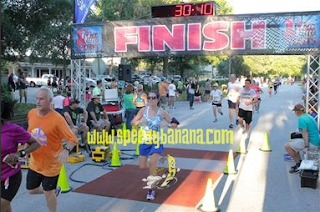 I don't think there was anything for me to drink again (only water) but I don't remember.

There was a sale going on a 1st Place Sports so we looked around for a bit and tried to pick up our race packets for the Drenched 5k which was the next day but we couldn't yet.