When we saw the advertisement for the Splash n Dash, we though it would be a perfect race to do during the summer.  Water balloons, water guns, a slip n slide and more?  Perfect!  We had to run 3 miles that day anyways for our back-to-back Dumbo training. (It turned out to be 2.8 miles)  So Cori, Heather, and I signed up.

Here's our goody bag--water guns, a frisbee, water bottle, drink ticket at Buffalo Wild Wings and water balloons (not pictured).  There was a huge water balloon fight after the race was over and Cori was filling the balloons for us, but we decided we really didn't want to participate. 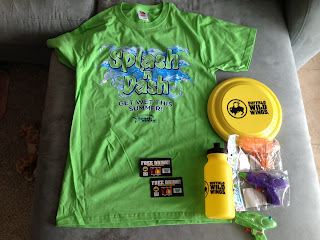 I got my outfit ready the night before.  We tried to choose an outfit that would dry quickly.  And I wore my old shoes of course.  We thought it was weird that there was no bib.  Anyone could race and they wouldn't know the difference. 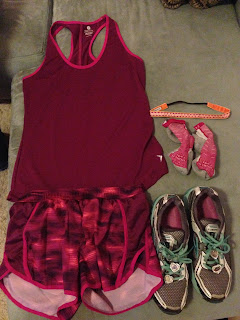 We left pretty early since we weren't sure how long it would take to get there or the parking situation.  Heather's hubby and cute little son came along for support.  The race started at 10.  We left at 8:30 and were there and parked by 9ish. 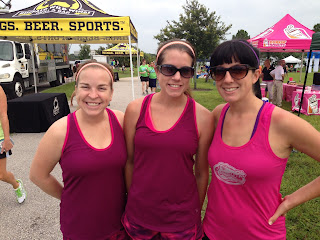 It was pretty empty when we got there. 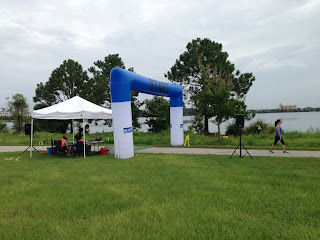 But people soon started showing up and there were lots of tents of sponsor giving out free food.  We thought it was weird that they were doing it before the race.  Who wants to eat a lot before running?  And we were worried they would run out before the race ended, but they didn't.  Let's see.  Jersey Mikes Subs was giving out free tea & subs, a Mexican food place was giving out queso, chips, and I think tacos, Planet Smoothie had smoothie samples, Dunkin Donuts had teas and donut holes, and the guys for Gridiron 5k had a cornhole game to play to win a free shirt from last year.  (I wanted the Gator one!  They said if they had one left over at the end, they'd give it to me since I didn't win, but they had run out).  I had signed up for the race the night before, but I convinced Heather and Cori to do it. 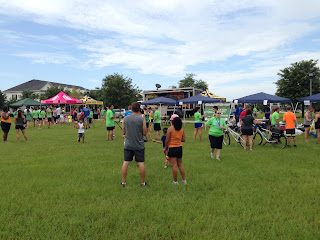 We saw them setting up the slip n slide.  Couldn't wait for the end! 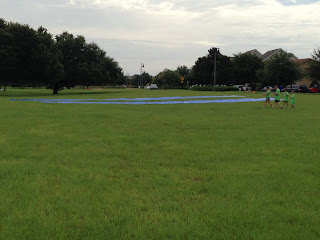 The Planet Smoothie character freaked Heather's son out at first but soon he was pointing at it whenever he saw it. 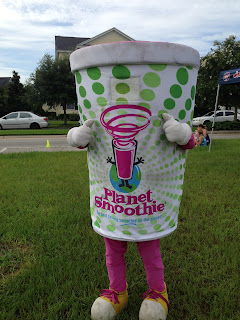 The race started on time (I think.  I didn't want to bring my phone or watch since we were getting wet).  We lined up in the middle.  But you could tell it was a fun run.  We encountered a bunch of walkers who lined up at the beginning and took up the whole sidewalk.  Grr... It's to be expected but still!

Towards the beginning, they had a little mister tent to run through.  Then after a while, they had tons of high schoolers with water guns.  And then high schoolers with water balloons.  Which was NOT a smart thing.  Most of the girls (and a few guys) got that it was a smart idea to throw the balloons at our feet (so it wouldn't hurt) or toss them high in the air so we could dodge them or catch them if we wanted to.  But the boy high schoolers weren't so smart.  They were pegging the runners--hard!  We saw one guy runner get hit in the face, one get hit in the hip, and many hit in the arms and chests.  And they hurt!  And except for the slip n slide at the end, that was all of the water involved.  I guess I expected more things to run through and under.  I wasn't impressed and I didn't like the water balloon part.

BUT  the slip n slide part!  It was so much fun that Cori and I did it twice!!!  It was soapy and when we got up we were covered in suds. 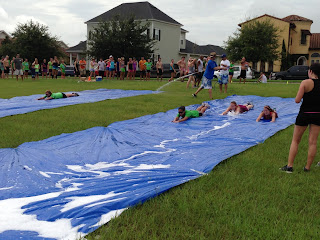 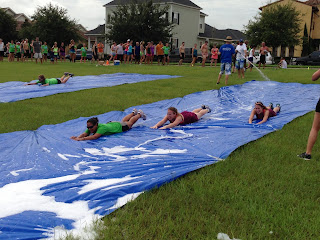 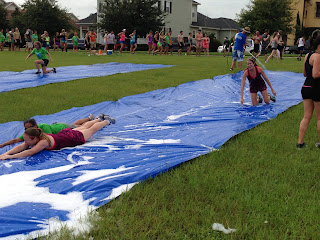 That part was a blast! After the race, they had the same food as before and then a Lasik place had ice pops and Buffalo Wild Wings had wings.   I'm not sure I'd do it again.  I'd want better obstacles/water things and no water balloons being thrown at us.  But it was fun and we had a good time! 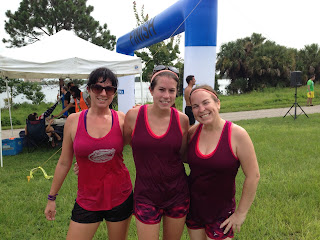 And we were soaked!
Posted by Andrea at 4:07 PM