I was excited to run the Gridiron 5k on Saturday, August 24 (I realize I haven't been putting dates on races, I don't think.  Oops).

Any time I can show my Gator spirit, I'm all about it.  I saw this amazing skirt from Rock City Skirts and had her make me one too.  And then my friends and I ordered cute shirts from Etsy. 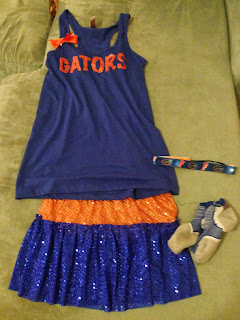 We got to the race early since we needed to pick up our race packets but the lines weren't long at all and we were quickly ready for the race to start.﻿ 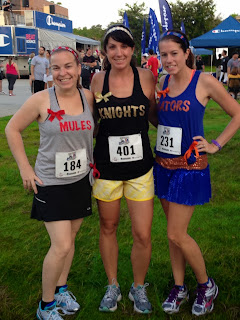 Cori and Heather were going to run together so I was going off on my own since I was going to run the whole thing with no walking breaks.  It was nice to run through the UCF campus.  I felt really good the whole race and for some reason, I thought my timing was better than it was.  I thought I was on course to be well under 30 minutes, but I came in at 30:01.  Boo!  I grabbed a Gator towel and waited for Heather and Cori.

Then we headed into the Champion shop where you were fitted for a sports bra.  And you got one free.  (We later learned that my friend Heather was supposed to get the same size I did but got a Small.  I gave her mine and I'll be giving away the small with some other goodies later on).

Then we had to take a picture with our school posters!  Poor Cori--no Muhlenberg College poster for her! 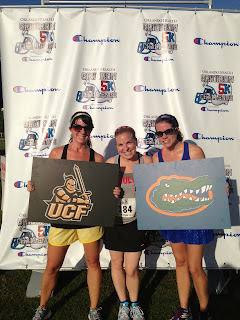 We walked around and checked out the goodies--several free samples of food and contests to enter.  I had to stop by the Gator tent and Heather stopped by the UCF tent.

In the race packet bags were two cups, a coozie, 2 tickets to a UCF football game, a Kind bar, and a tshirt.  I was excited that you could put your favorite school and if it was a certain one, you got a shirt in that color. 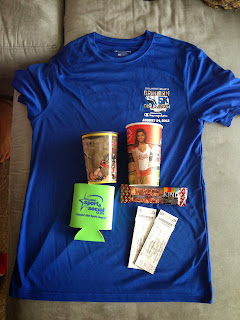 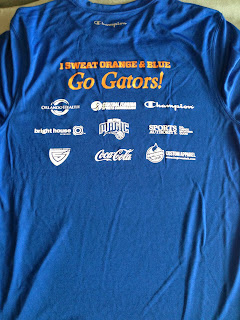 I couldn't find any pictures of me running on the facebook page.  Oh well!

I usually post my Runkeeper stats since that's what I've used since the beginning, but I forgot to stop the app for a while. So I'll post my Garmin stats instead.