When I first heard there was a race through the University of Florida campus on September 28, 2013, I was so excited!  I love my campus and miss my days there.  I convinced my hubby to get up waaaay early and drive me up there to run the chORD Half Marathon.

When we got there, it was pretty empty.  And honestly, it stayed that way.

I had been saving my orange and blue Lululemon outfit for the perfect race and I was so glad I did! (This was my first time using KT tape.  And yes, I'm a dork and had to get orange and blue) 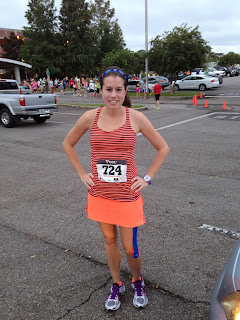 Look--its pretty empty.  Only 162 half marathon participants and 40 5k participants so only a little over 200 runners in all! 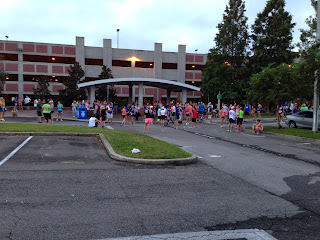 We took off and did a big block.  I knew right away that the distance was off.  I figured that the mile markers would fix itself eventually.  (but no...wait for that part).  The  mile markers were on tiny boxes on the side of the road.  Sometimes they had volunteers helping point the direction, other times you just had to make sure you could see the people ahead of you.

After that first big block, you ran back by where you started.  The 5k runners finished their race and we did the part of the big block again before heading off into the rest of campus.

Hubby surprised me by being towards the end of the second big block.  Probably around mile 6ish.  See how there's no one around me?  Yup.  That's how it was a lot of the time.  People were quite a bit ahead of me and quite a bit behind me.  Didn't feel like a race, so much as a training run on campus.  Oh well, I enjoyed seeing everything. 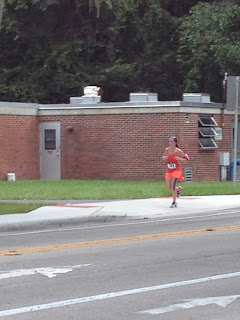 One of my favorite parts was running through the stadium corridor.  The only problem was, once again, it got confusing.  You had to run it twice.  But there weren't any signs saying that, just a person at the end of the first loop.

Not the best picture, but the field is behind me. 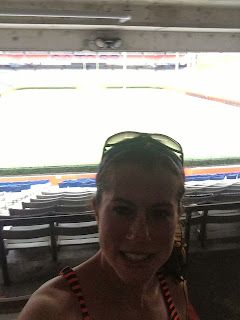 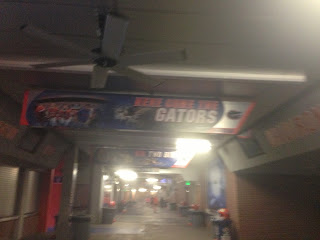 After we got out of the stadium, I felt water.  I thought maybe the sprinklers were on.  Nope, it was raining.  I didn't see that coming at all.  I ran the rest of the race in the rain.

Another confusing thing, towards the end, at one point, a police officer let people continue going straight, where they would turn right at the end of the road.  Then right in front of me, she directed people to take an immediate right, telling us to turn left at a certain road.  Umm..why divide the runners randomly??

Anyways, I knew at that point, the half marathon was not going to be a true half and I got mad.  This was the first race that I was running on my own so I was pushing it to be a great time and it was a half mile off.  I hoped maybe my Garmin watch and Runkeeper app were both wrong, but Kory said that he heard several people complaining at the end about the short distance. 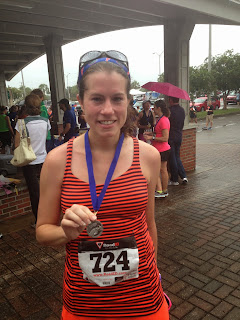 I finished, got my medal and headed to the car.  I wanted out of the rain. 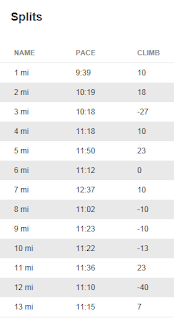 So even though there were a lot of kinks that need to be worked out and I was pretty frustrated at the end, I would definitely do this race again.  I absolutely loved running through the UF campus!!
Posted by Andrea at 9:32 PM

Email ThisBlogThis!Share to TwitterShare to FacebookShare to Pinterest
Labels: Gainesville, half marathon, races