Well, I had a fun and exciting morning with runDisney!

Yesterday Kory forwarded me an email asking for 20 cast members to be in a photo shoot for runDisney today.  Since I started Spring Break today, I could do it!  So I called and got through at about 2pm and they were making the list.  So it was perfect timing!

I was up at 5:55 this morning ready to go.  I had to make sure that I had my cast ID, was wearing running shoes, and no clothing with big logos.  When I got in the van in the parking lot, it seemed like everyone knew at least a couple of other people there.  But they were all really friendly!

We drove into the Magic Kingdom and they passed out runDisney shirts.  We changed and then they explained what was going on.  There was going to be a new challenge and race during the Marathon weekend.  There would now be a Dopey challenge which included the 5k, a new 10k race, the half and the full.  For a total of 6 medals!  We were told that we couldn't tell anyone until 3pm.

Then we watched some of the taping.  Poor Snow White.  She kept counting the Dwarfs but only had 6.  Where was Dopey?  He wanted to be in the race too so he followed us out of the castle!

It was a beautiful day outside but FREEZING (it was about 48 degrees so cold for me)!  I was wearing a skirt, the short sleeved shirt and a jacket.  But we warmed up some once we started running. 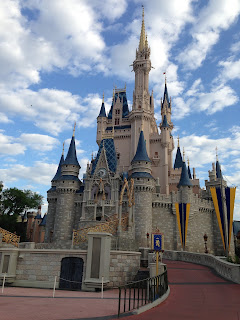 The race sounds really exciting!  I wish I was ready for that kind of challenge.  But I'm still debating doing the full.  Should I do it?  I have a feeling that I need to decide now because when Marathon weekend events open up for registration on April 9th, they're going to sell out fast!


Visit runDisney's blog to see the video about it! (or click below)