We stopped by my friend Kristin's house to pick up my race packet since she was so nice to get it for me.  The goody bag was full of fun things!  It had a mesh bag, a bag of Powerbar energy chews, 2 Powerbar Performance Energy Bars (I've never seen these before..they feel like taffy!), a water bottle, a pint glass, a reflective bracelet, and our tech shirt.  (next time I will try to remember to take a picture of the goodies! but here's a picture of the tech shirt!) 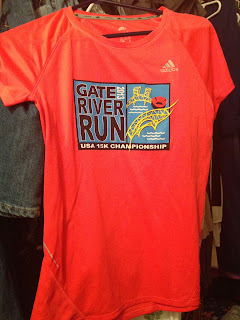 I set my alarm for 5:40, which seems early but since I'm used to getting up at 3 for the Disney Half races, this didn't seem too terrible. My parents and Kory were coming to watch me so they drove.  We picked up Kristin on the way.

The race didn't start until 8:30 so we walked around a little until about 8:00.  It was so cold!  I had packed a skirt, a tank top, and a long sleeve shirt.  We decided to wear our long sleeve shirts.  And funny thing, our shirts were the same ones, just different colors (mine was a little more purple than hers)!  Cori and I dress alike when we race so this made me laugh that Kristin and I did it unintentionally.  I also threw on a pair of my mom's pants under the skirt to wear just until we got into the corrals. 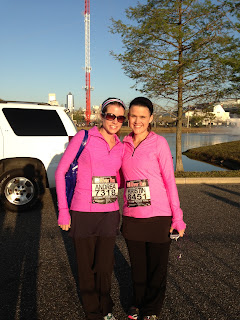 Kristin and I were in the second wave.  We thought it was interesting that although there were almost 17,000 people running, there were only four waves.  I'm used to there being around eight at Disney.  And honestly, you could feel the difference.  There race path was so crowded since so many people were starting at the same time.  On one hand, it bugged me because it was hard to get past people, but on the other hand I love people watching so it kept me entertained.  Either way, it didn't stop me from enjoying the race.

Anyways, I am a Galloway runner so I do intervals of 2min run/1 min walk on longer runs.  And during races, we usually run the first mile so we don't get run over.  But I knew Kristin runs the whole thing so I wanted to run with her a little bit.  I ended up running 29 mins (which I've only ever done once before!)  It was almost to the 3 mile mark but not quite.  Then I started up my intervals.  My legs could definitely feel the 29 minutes!

I don't remember what mile it was at, but I remember seeing some runners talking to a news reporter.  I remember thinking how weird it was that people would stop running to talk.  It turns out that the runners being interviewed were actually news reporters from that station.  Anyways, if you look closely in the picture below, you can see me on the right in between a person wearing a yellow shirt and a person wearing a blue shirt. Random, I know! (Kristin's mom said she was watching the coverage on the news and she saw us run by after the first bridge). 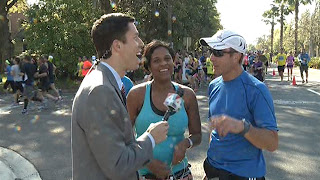 Running through the neighborhoods was fun!  There were lots of people out watching.  They went all out.  They had chairs set up and were grilling food and drinking drinks.  A couple of people even had goodies for the runners.  I saw (but was on the wrong side for) candy, rice krispie treats, little sausages, and orange slices.  I did get a little cup of beer (I saw 3 different houses handing it out but only stopped one) and an ice pop.  The ice pop was perfect and I stopped for the beer just to say I had but it actually hit the spot!

We ran over two bridges:  One at the beginning and one at the end.  The one at the beginning wasn't bad at all.  But the one at the end..I can see why they call it the Big Green Monster.  It was huge!  I honestly stopped my intervals once I got part way up the bridge.  I made a deal with myself that I could walk to the top as long as I ran the whole way down the bridge and the ramp.  So I did (running down was fun! I liked the momentum.)  And right after the ramp was the finish line.

I was definitely tired.  My legs could feel the straight running from the beginning of the race but I knew I could do it.  I knew my family was watching me from somewhere at the end, but I didn't see them.  I usually speed up a lot towards the end and I had to concentrate on not running into anyone!

The end of the race was horrible.  You had to take this part off your bib and hand it to people and go through these chutes to get your medal.  The line took a good 5 minutes.  Not what I wanted to be waiting in right after I ran.  I just wanted to find my parents, Kory, and Kristin.  I'm not sure if that's normally how it is, but I'm used to Disney where they have tons of volunteer just standing at the finish to hang the medals over you with no wait.

My final time on my Runkeeper was 1hr 41 mins 42 seconds.  It was a little slower than I wanted.  I wanted to be under 1:40 but it was so hard to run around people after my walking intervals since it was so packed.

I finally found my family and met up with Kristin.  She had finished 4 mins 42 seconds before me.  We headed to the after party but it was packed.  My dad bought me a beer (which tasted so good!) and then we headed home. 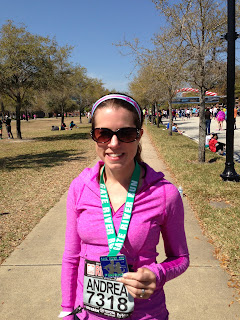 My Runkeeper app said I ran 9.56 miles so my pace was better on there. 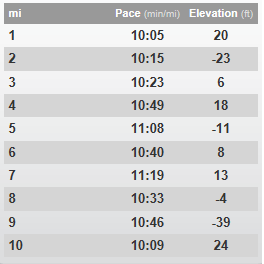 Overall, it was lots of fun and I'd do it again!!