We woke up early and headed over to the Space Coast races. 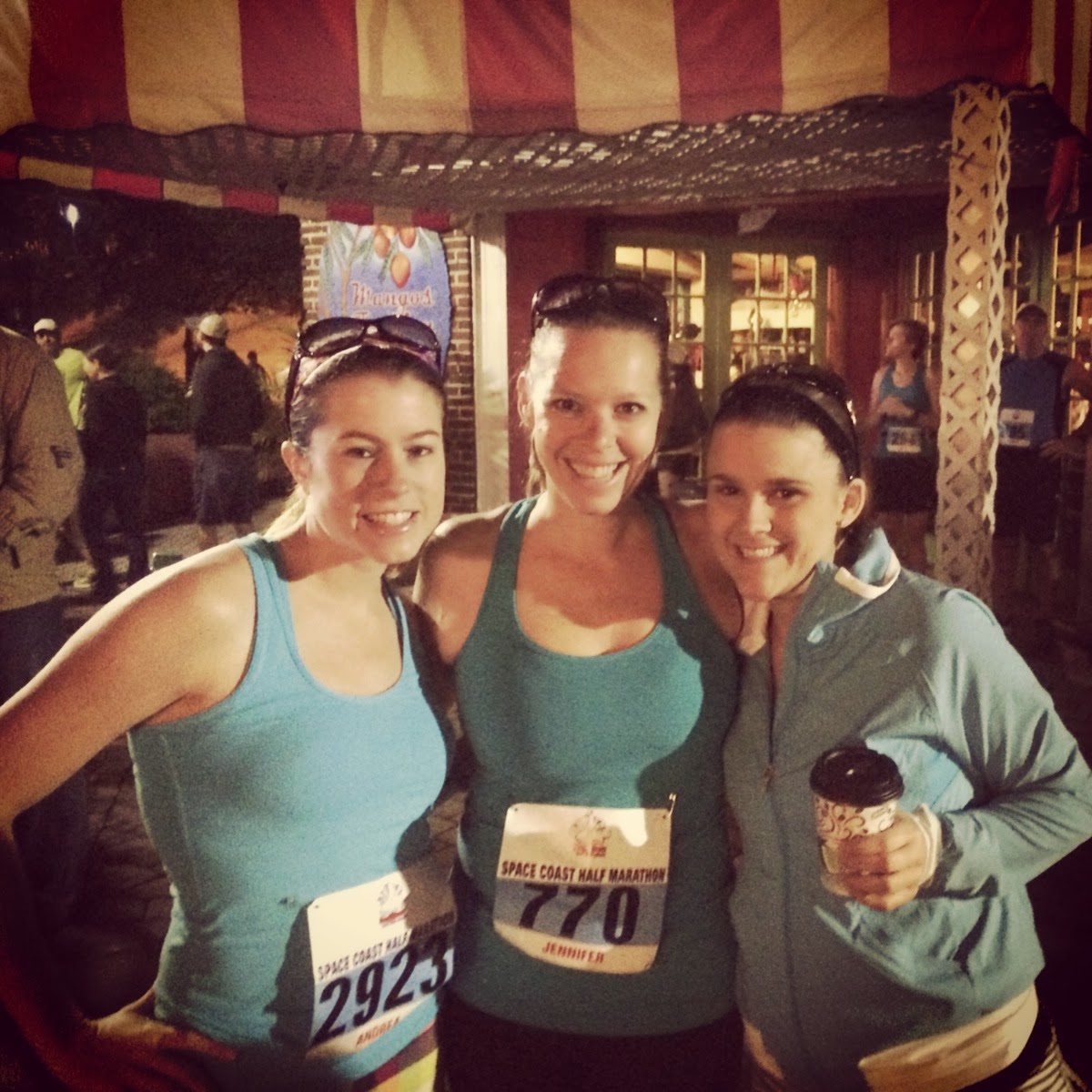 We all three had almost the same color shirts on.  And while Cori and I always plan our outfits together, I hadn't planned anything with Kristin (A Mom on the Run) and Jenn (Runs with Pugs).  It just happened :)

We headed into the really long line for the porta potties.  And we were pushing time.  I stress about stuff like this.  They announced several times that all half marathon runners needed to be lined up.  But we stayed in line and waited it out, said goodbye to Kristin (the marathon started a half hour later) and walked over to get in line.  Space Coast doesn't have  a proof of time corral system so you just line up according to your pace.  I lined up with the 10 minute milers.  Soon they were playing the national anthem.  The sound system went out and it was so touching to hear everyone just continuing singing.

Before I knew it, they had the countdown to launch going off on the big screen (wish it was bigger) and we were off!  It was soooo dark running down the road for the first few miles.  Like pitch black dark.  I'm not sure I've ever run when it was that dark out.  I was so afraid that I was going to fall.

I wasn't sure how long I was going to run for before starting my intervals.  Before my injury, I wanted to run 3 miles then start.  But since my knee had flared up the previous Thursday at the Subaru Distance Classic 6k, I only made it a little over a mile before I had to start my intervals.

It was pretty running by the river.  It was nice to see the sunrise.  But for more than the first half of the race, it was always crowded.  I did enjoy the guys with the sprayers at the turnaround point.

Around  mile 8 I got annoyed.  I am a Galloway runner.  I do run walk intervals of run 2 minutes/walk 1 minute.  But I don't quite do them correctly.  2:1 intervals is supposed to be a 12 minute pace.  I go faster than that and hit anywhere from a 10:15 pace to 11:30 (during this race, I only hit over 11 minutes once).  Very rarely do I hit a 12 minute pace (only once I get up into 18ish miles).  Well, around mile 8, the 2:15 pace group passed me.  Pace groups are fine.  When they don't take up THE. ENTIRE. ROAD!!!  Seriously--they took up from the edge of the road to the yellow lines in the middle.  And since it was an out-and-back course, half marathoners were coming up that other side.  So I would pass them on my run intervals, then they would stampede over me during my walk intervals, then I had to dodge in and out during my run.  It was such a freaking pain. Unless its a  wide course, I usually stay to the right so people can pass me.  But I had to go run the yellow line the whole time so I could veer into the oncoming side to pass the pace group.  I really didn't understand why they could run 2-3 people wide.


And then around mile 10, a mini disaster struck.  Remember how during the last post I said I was lucky and never had to worry about what I ate before a race?  Well, I guess I was wrong.  My stomach started hurting--badly.  I was not about to stop though.  There were very few porta potties and I wasn't going to waste time.  But I did not enjoy those last few miles at all.  I just wanted it to be over. (although at that point, the 2:15 pace group left me behind so at least there was something positive). 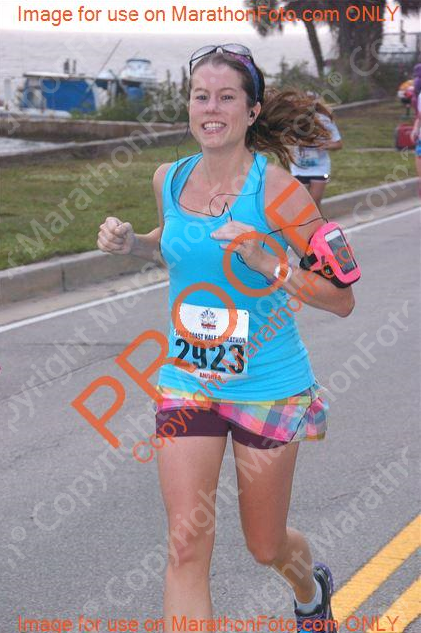 At the end of the race, you curved around  and around on these bricks.  I know a lot of people had an issue with the bricks, but I didn't mind that.  I minded the around and around part.  At the end, I like to sprint the last .2ish miles but I couldn't do that since it wasn't a straight line. 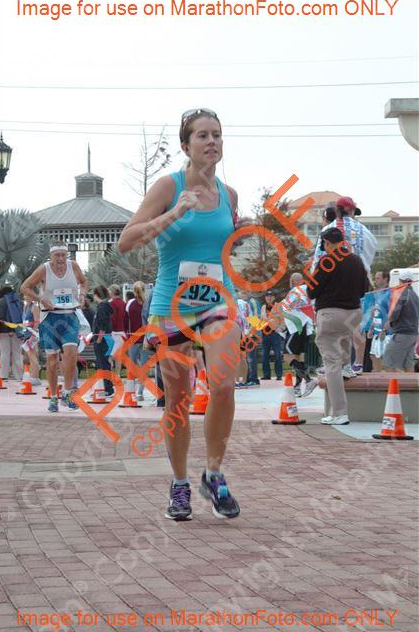 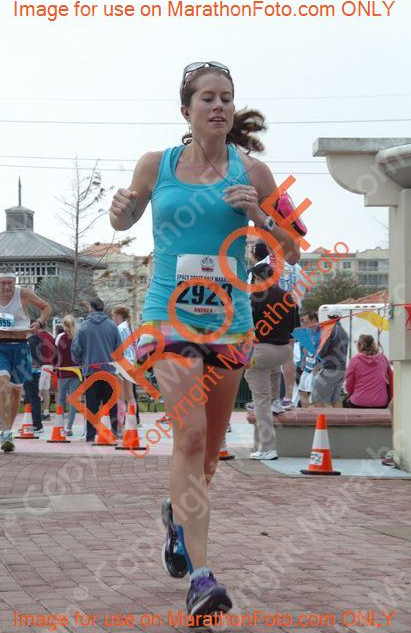 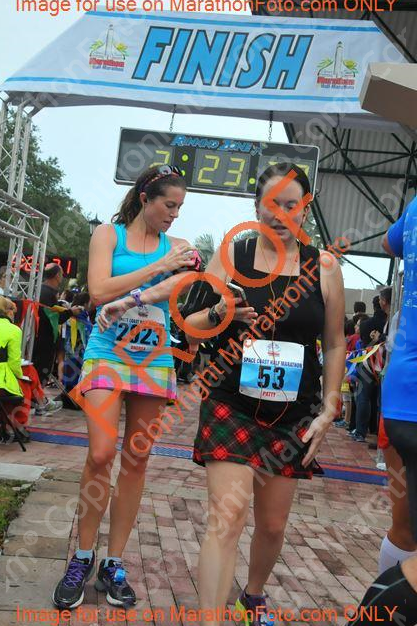 Another great shot of me messing with my watch/phone...I never learn :)


But I was happy to be done!  I grabbed my towel (what a cool post-race gift!!!) and medal and texted Kris and Jenn to see how they were. 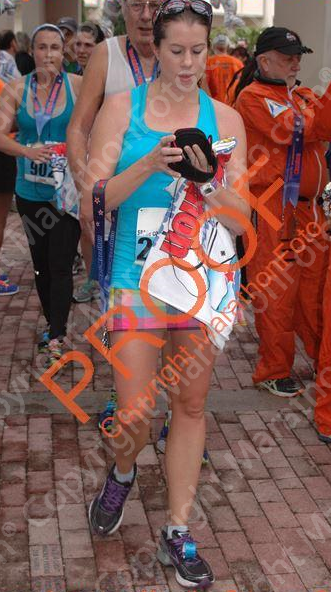 I got a little post-race brain.  I thought that Kristin had posted that her legs were cramping and she was at mile 12.  I knew that the marathon mile 13 was right by where I had just finished so grabbed a banana and booked it to mile 13 to give it to her.  So I waited and waited.  Finally after 10 minutes, when I knew she should have passed me, I checked my phone again and it turns out it was Jenn!  Oops!  I didn't want to miss her finish her first half, so I raced back to the finish line and caught her just in time!!  So proud of her for finishing her first half!!! 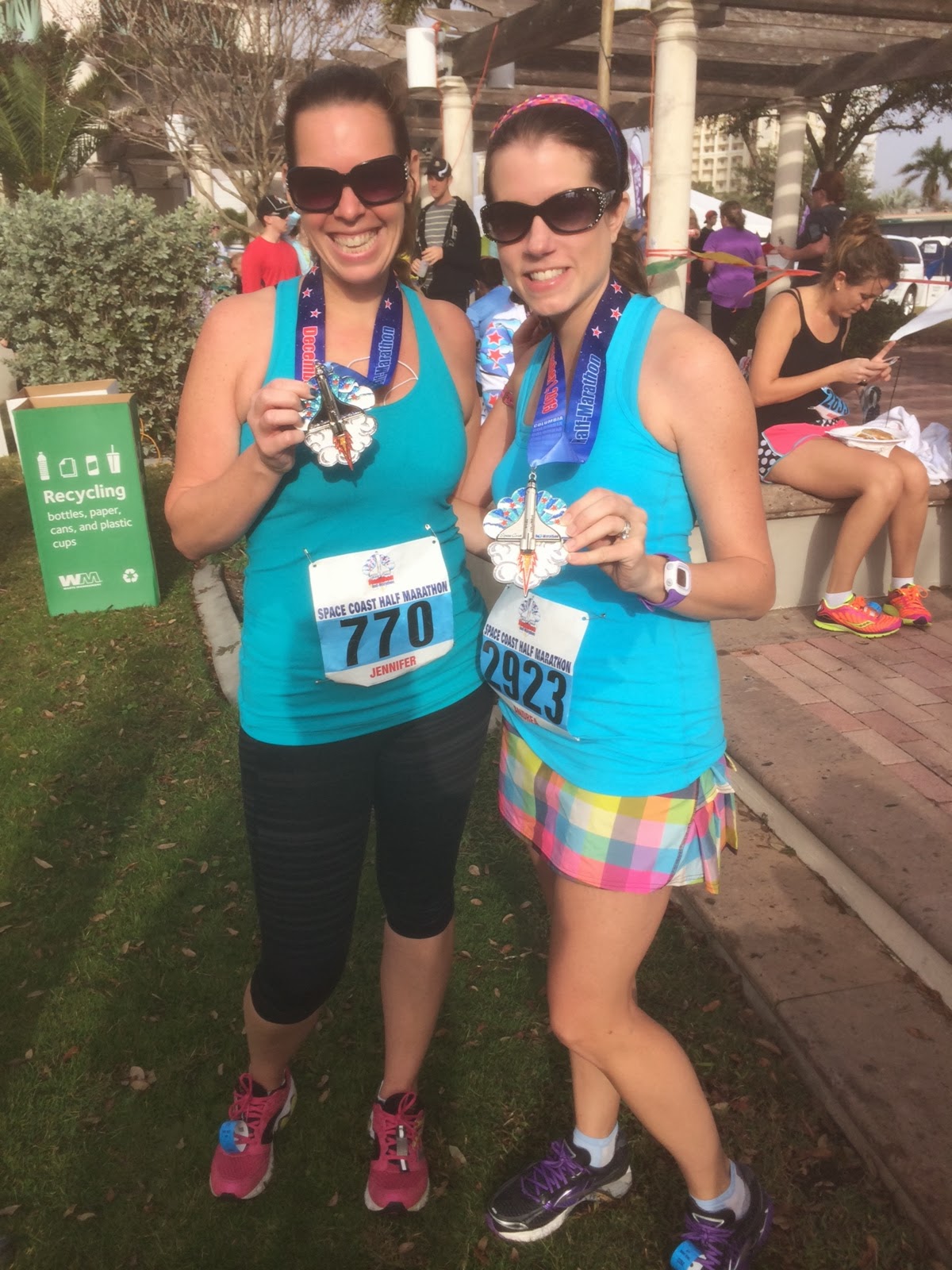 Jenn and I met up with her hubby and son and Kristin's hubby.  We grabbed some post race pancakes and eggs--yum!  So good!!  I was freezing at the end so I was thankful I had packed my long sleeve race shirt to put on and I wore my towel like a skirt!  We waited for Kristin to finish the full while we continued cheering people on at the end.  That was so much fun.  Until we saw the marathon finishers come in and then I got scared.  (First let me say, I'm not sure it's so smart to have the marathoners start 30 mins after the half marathoners.  Because those really slow half marathoners were getting in the way of the really fast marathoners.  The finish line was really really narrow.  And those poor fast marathoners were having to dodge the walking half-marathoners.  I would have been so frustrated if I were them.)  But anyways, we saw the marathoners come in and there were some that looked like they were in such pain and I was mentally freaking out.  I had my first full in six weeks and I was so afraid that was going to be me.  I didn't want to be in pain the whole time!!

Soon we got the text that Kristin was almost there 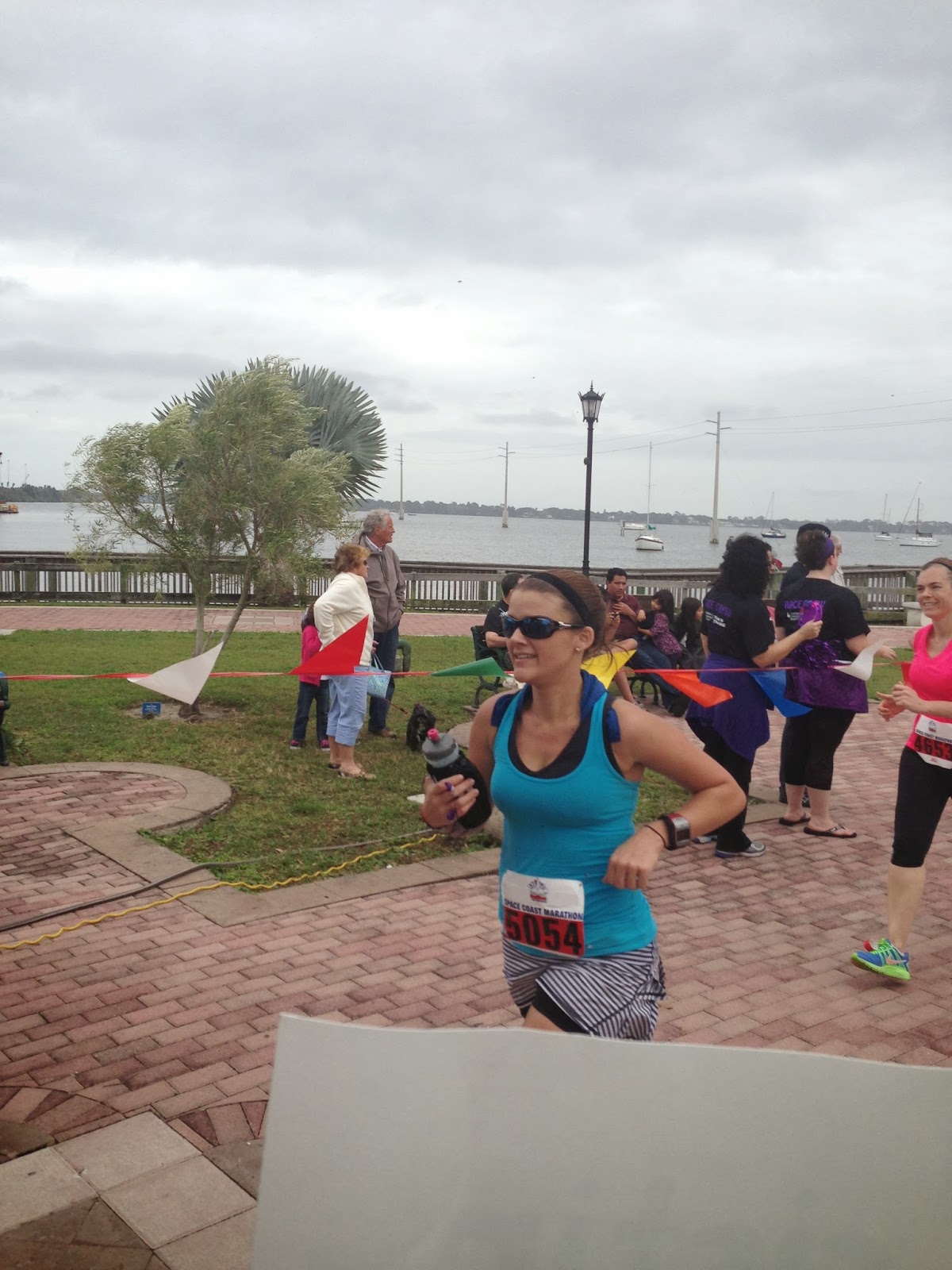 Yay Kristin!  She did so awesome!  And she looked great when she finished!  I was really hoping I'd look that good in six weeks!

We took some pictures and then headed out. 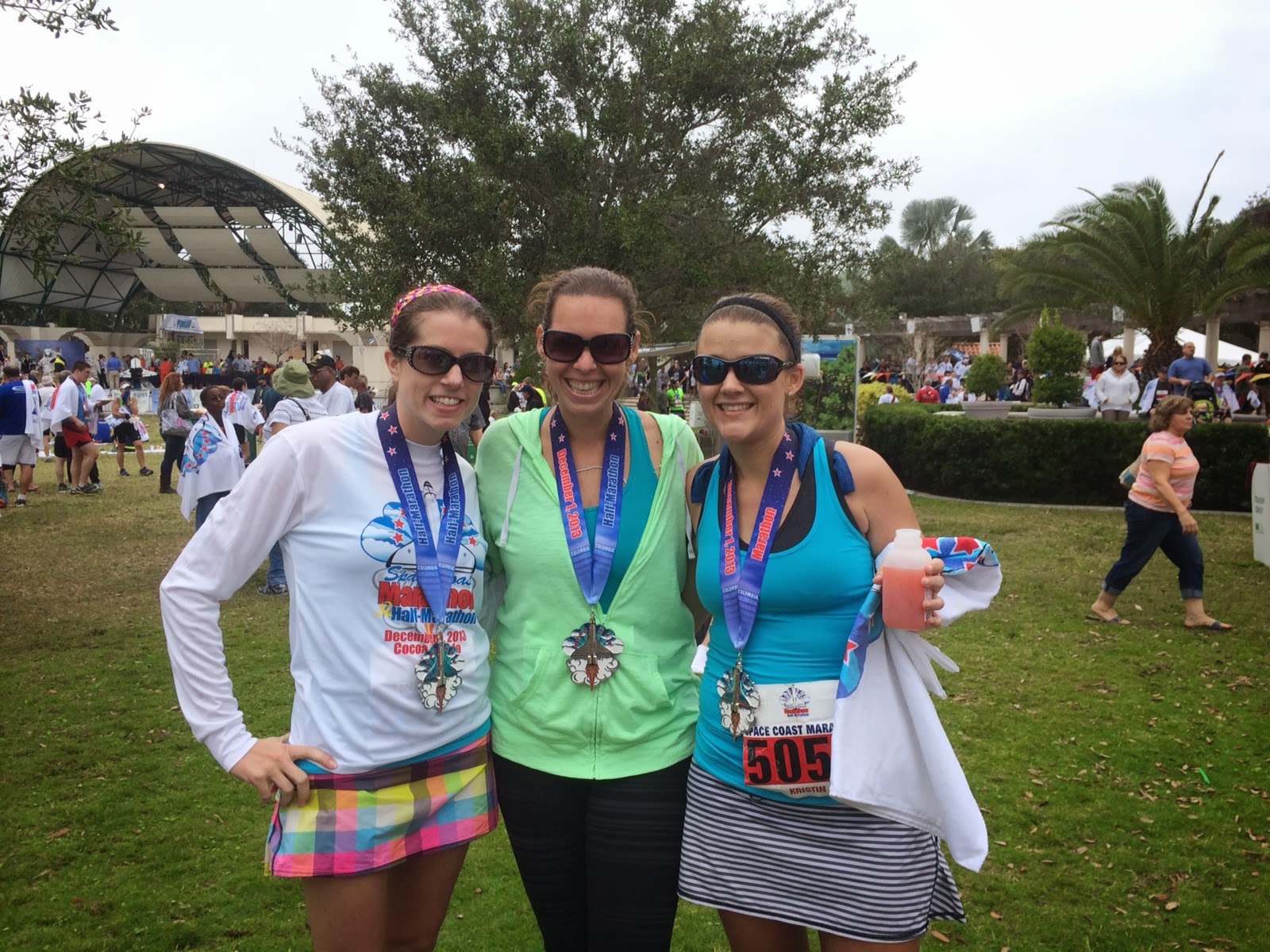 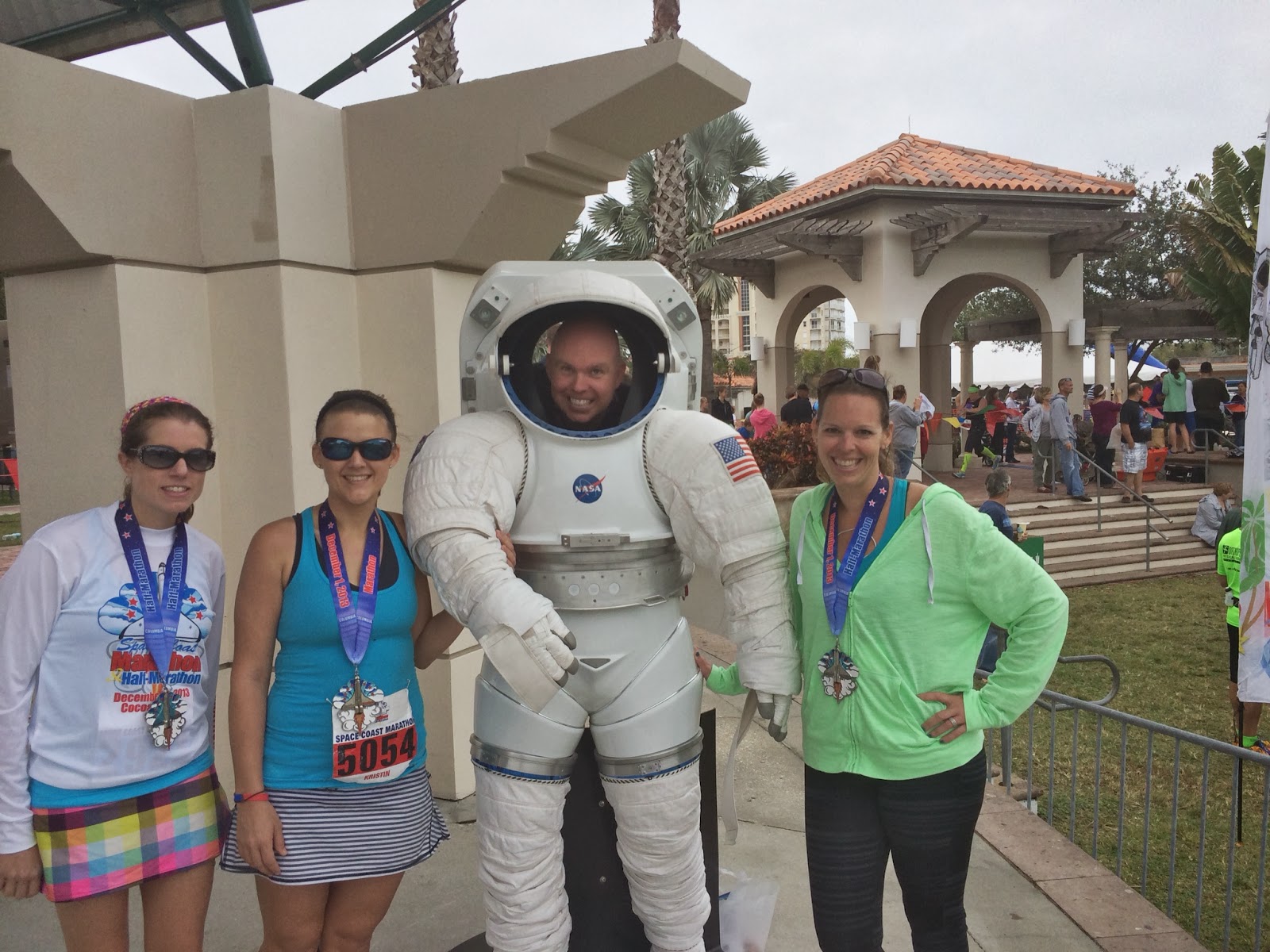 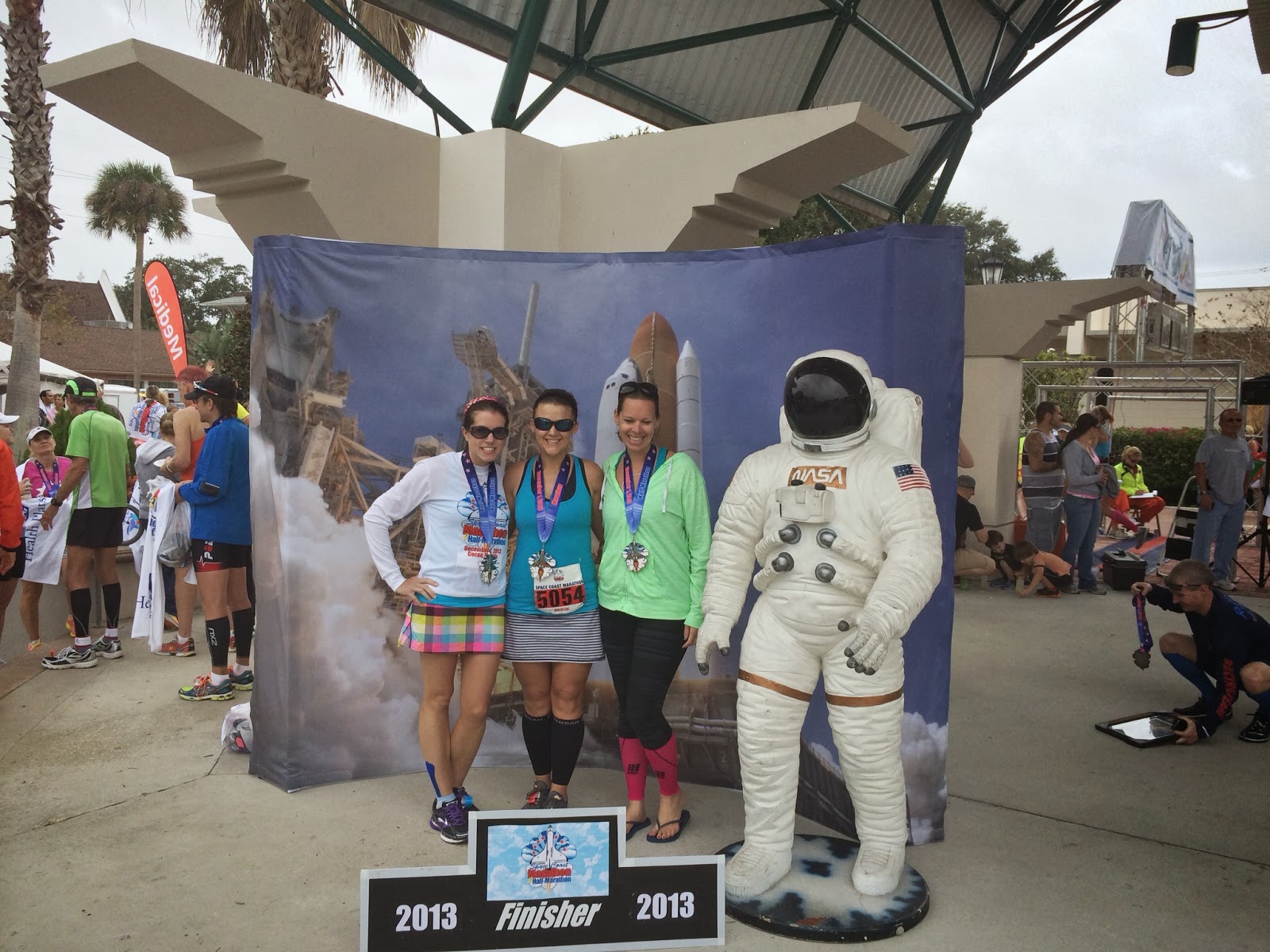 This is Kristin's husband's idea of being funny (maybe this is the petrified look I had on my face when thinking about the next 6 weeks?) I caught a ride back with Jenn and her family to the hotel room. And we got stuck while a motorcycle caravan passed by for 40 minutes.  Ugh.  So frustrating.  By the time we got to the hotel room, I just wanted to be home so I skipped the shower (hey, I was just riding home by myself so no one had to smell me!) and headed home.

Here are the goodies from the race. 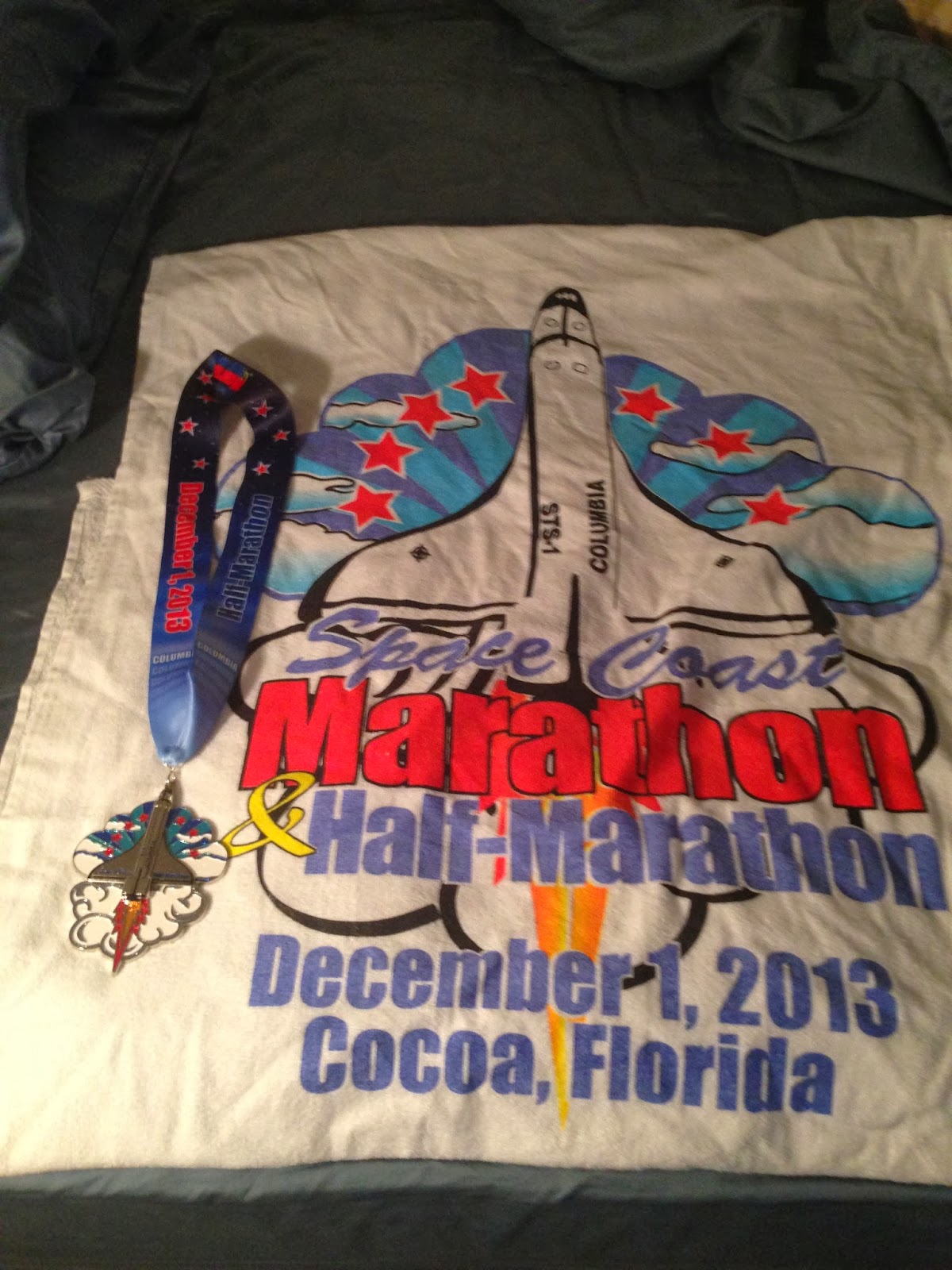 Such a cool medal!! 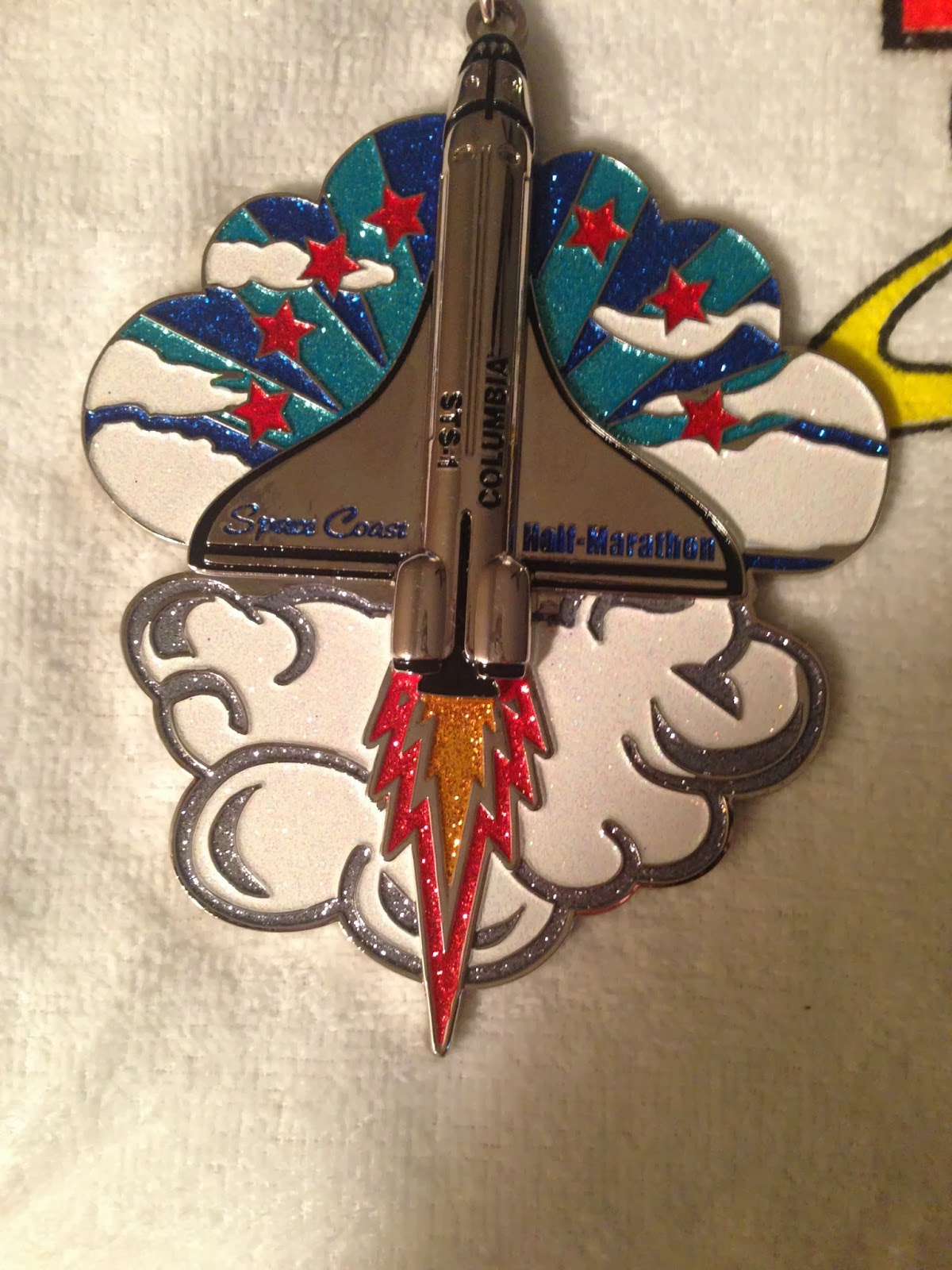 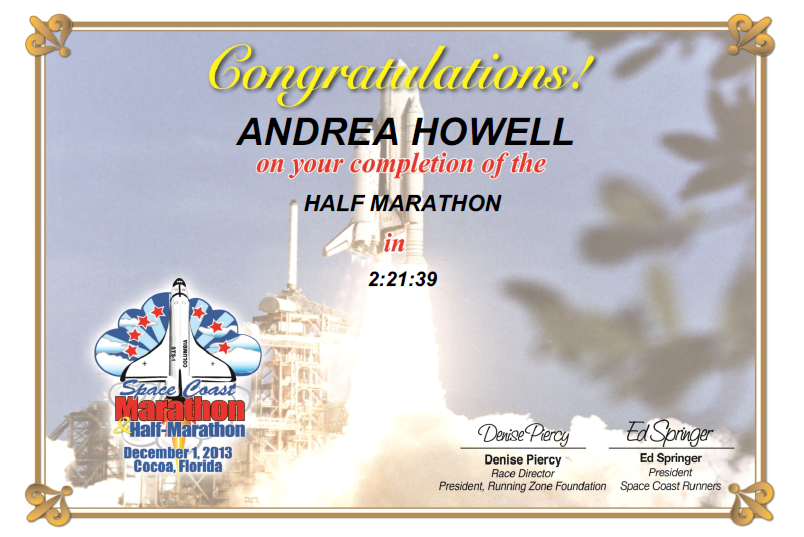 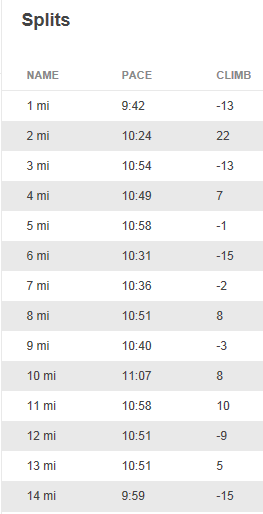 I'm debating on signing up for this race again next year.  I mean I would like to run it, for sure!  But we're hoping to start a family and unfortunately, they aren't like major races and offer deferrals.  So if I sign up and we are pregnant, I'm out $85.  But I hate to not sign up and then not be preggers.  Decisions, decisions!!
Posted by Andrea at 4:38 PM