The Wine and Dine Half Marathon was on November 9, 2013.  The year before, it was our first half marathon.  I remember how nervous we were.  This time we were ready to just enjoy it.

But first up, one of favorite parts:  The expo!

I thought the race shirts were cute!  Still didn't like the material or that it was unisex but I wasn't gonna complain since I knew that for my next Disney race, they were starting with gender specific shirts. 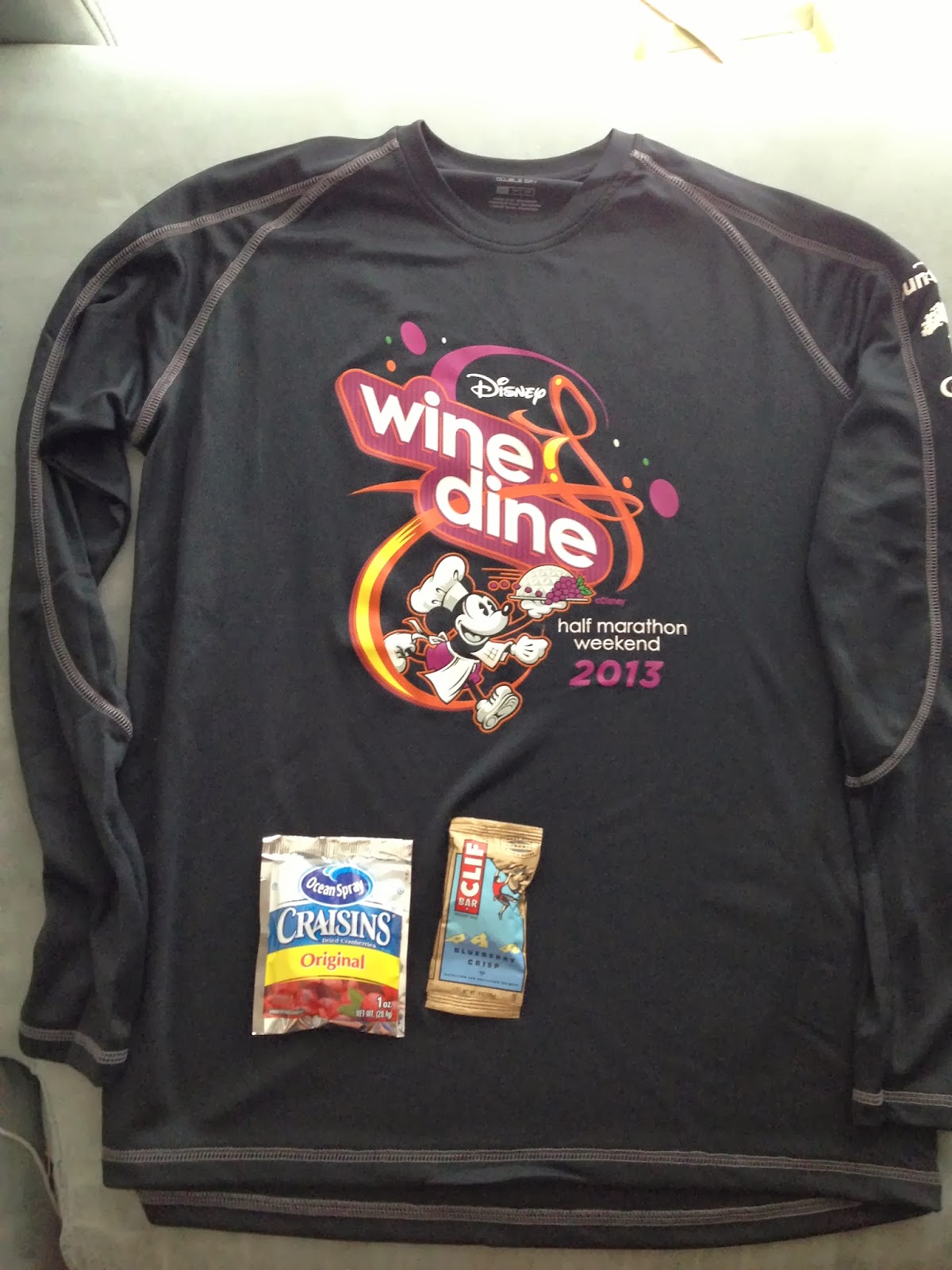 And now for the bought goodies:  This cute New Balance tee to go with our Minnie shoes. 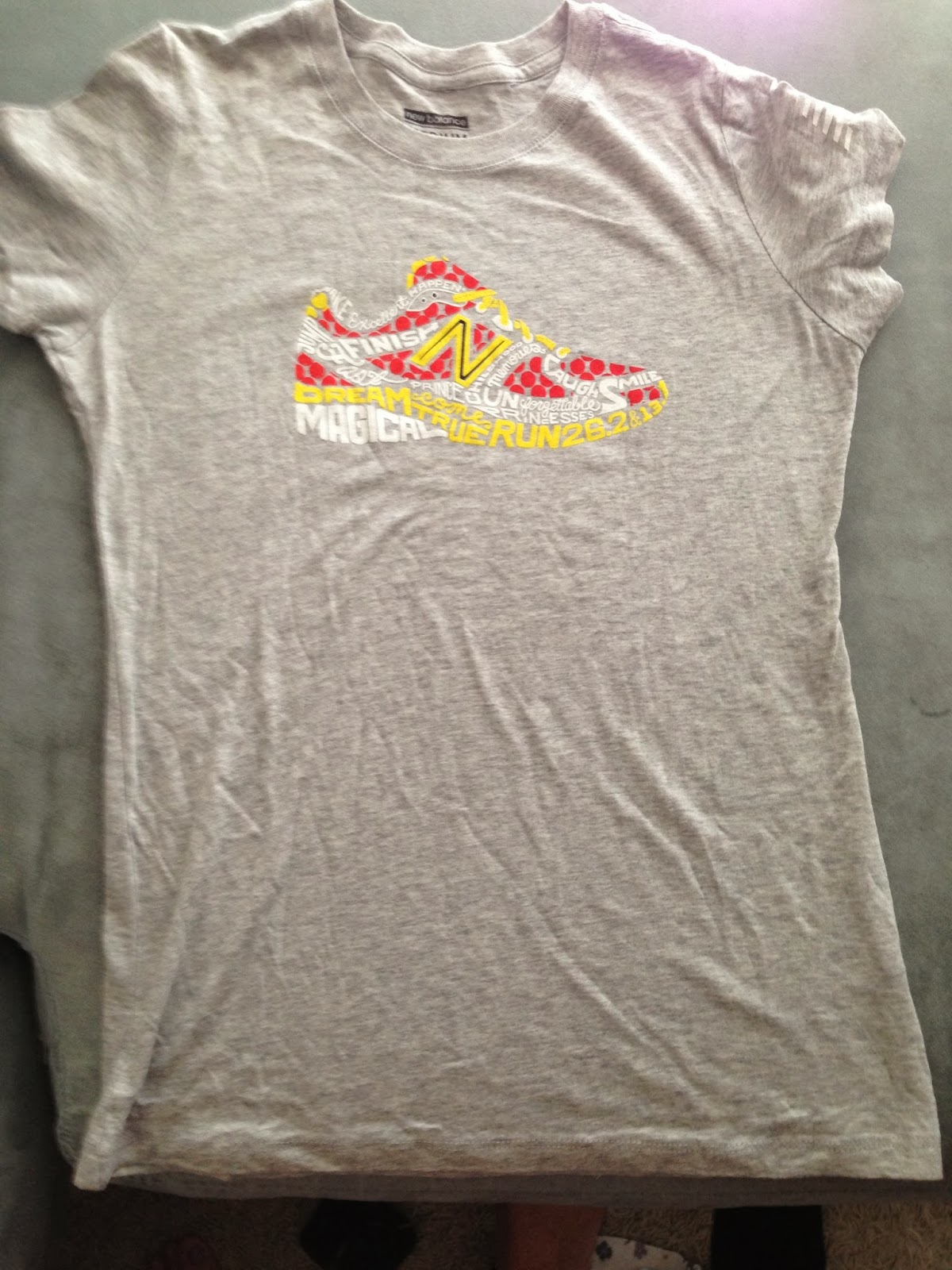 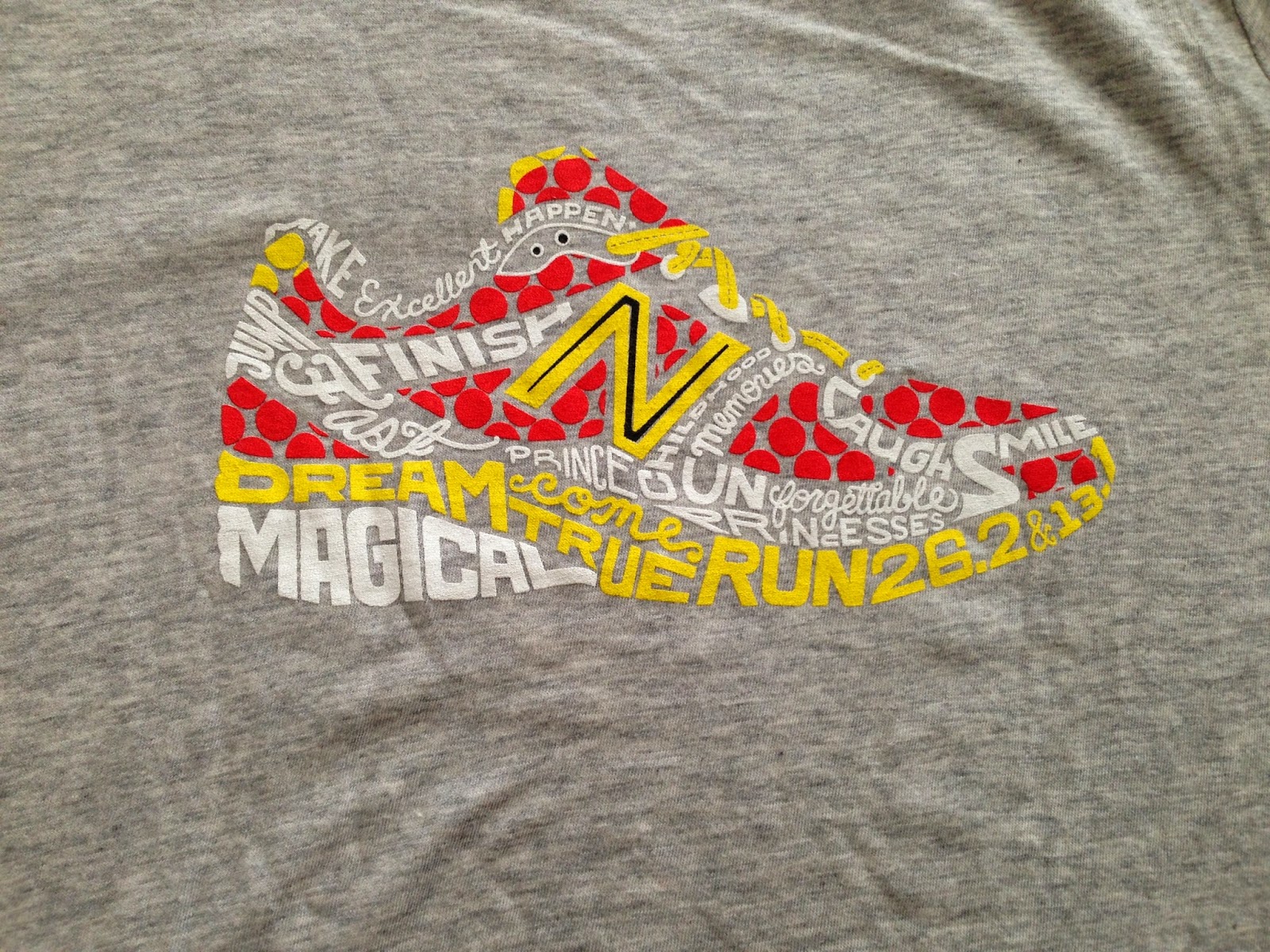 These cute shirts from Raw Threads (the space one was perfect for my Space Coast Half coming up!) 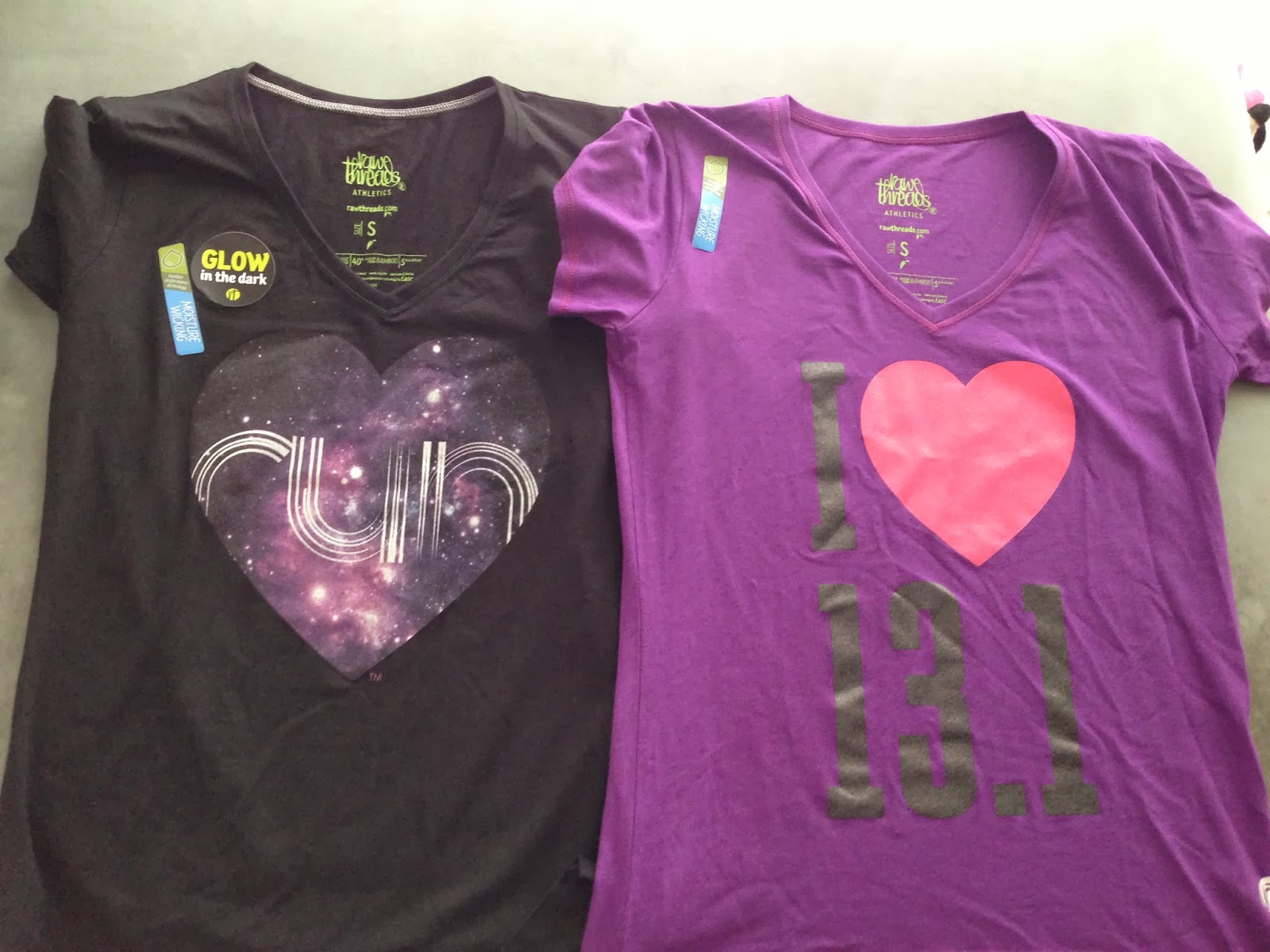 And we bought our normal: The I Did It tee, Sweatybands, the vinylmation medal, and the necklace. 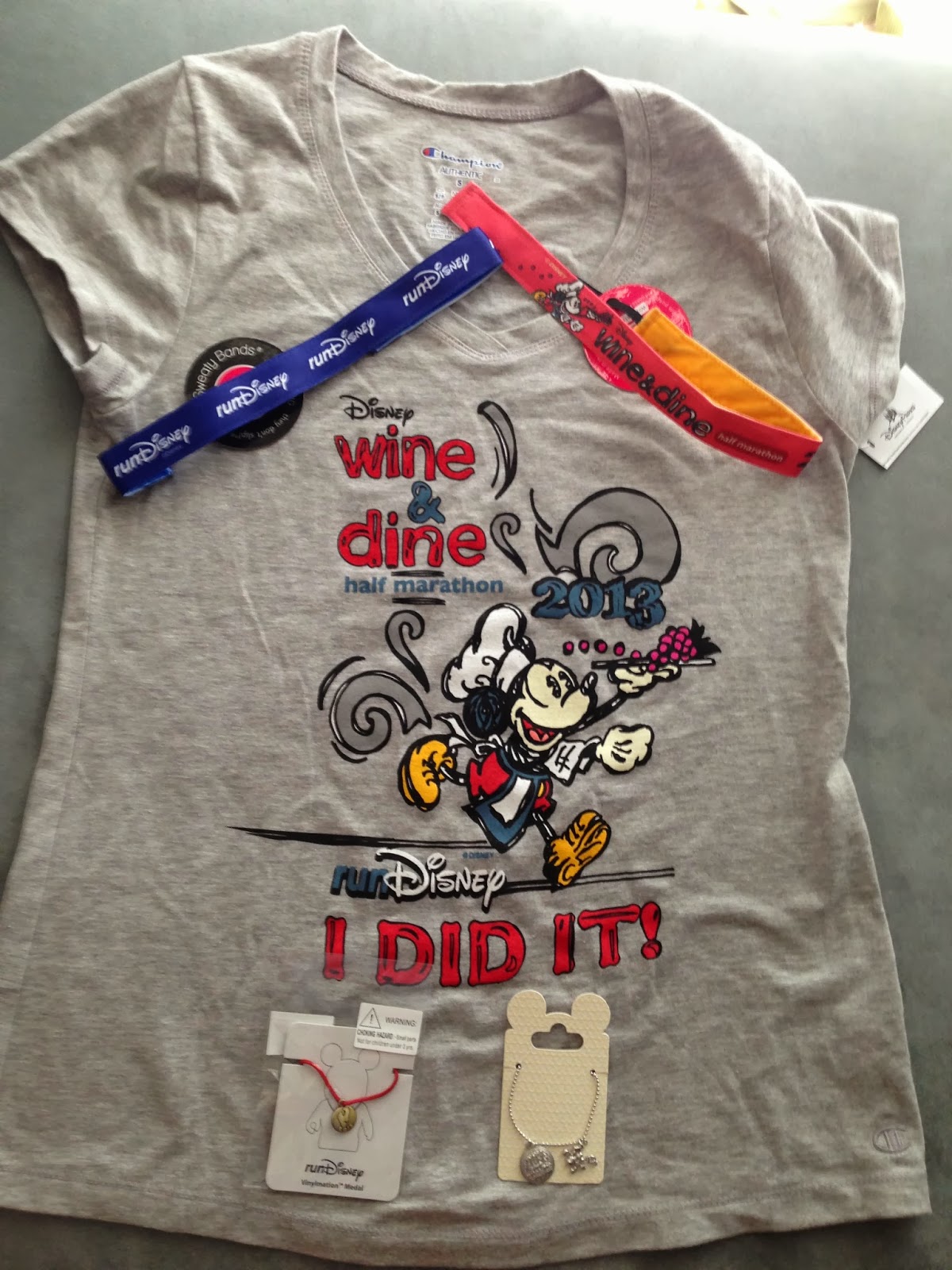 We found a cute Brooks tee and got our Lasting Commemoratives art card. 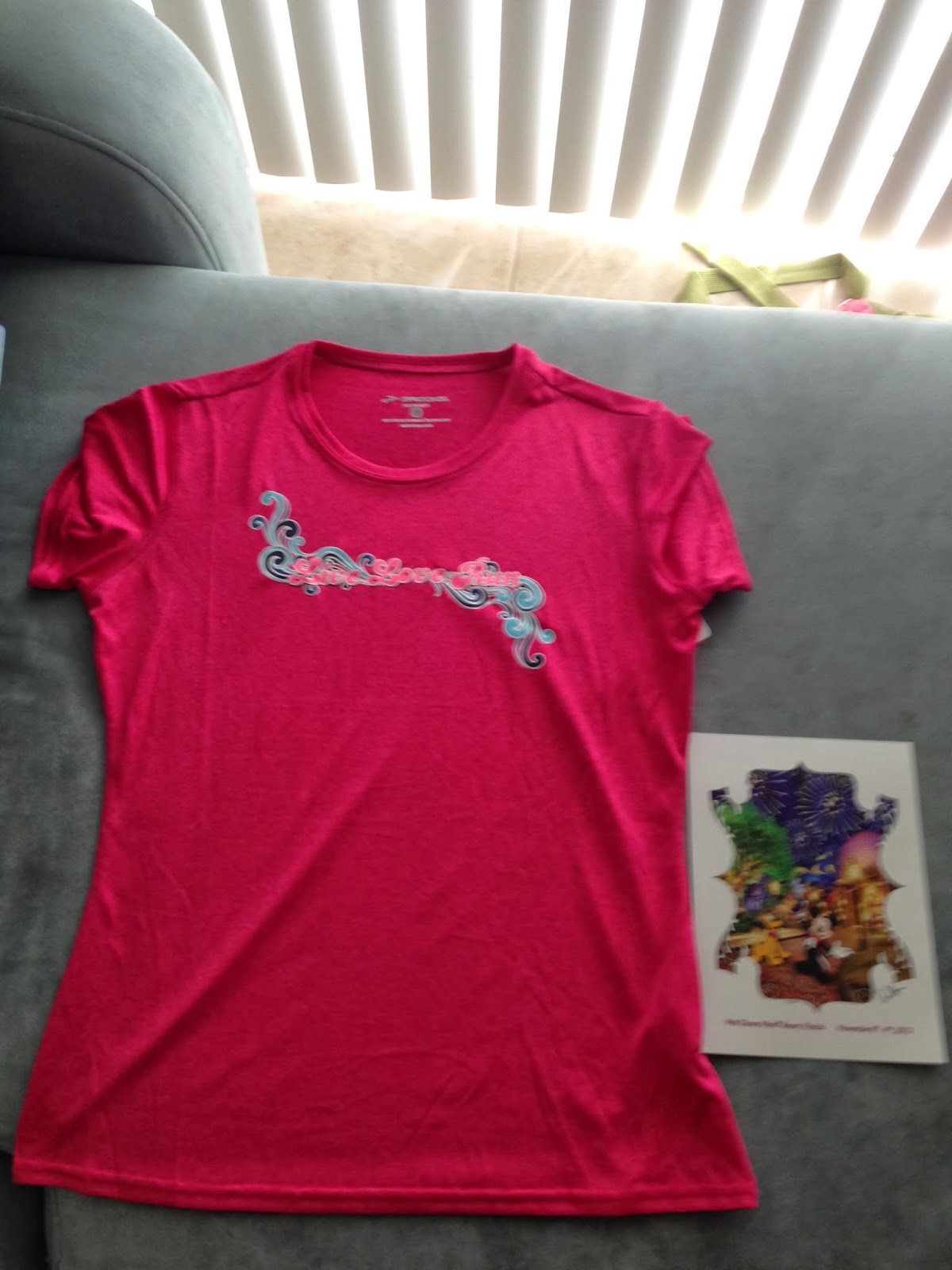 And of course we found some new Sweatybands! 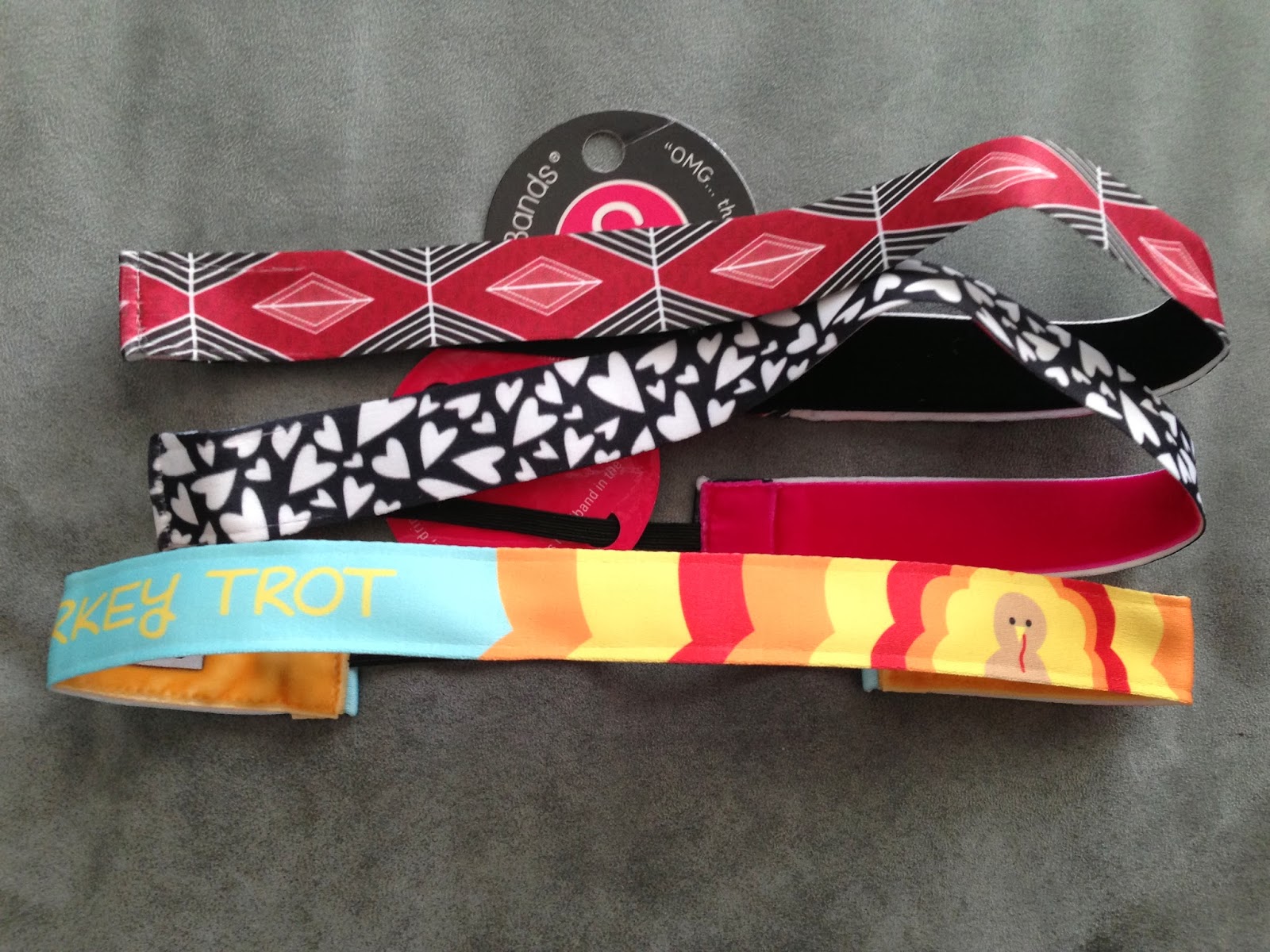 We were ready for the race!  Our costumes were last minute--a friend was going to run with us and we were going to do a Monsters Inc thing but she got injured so we changed.... 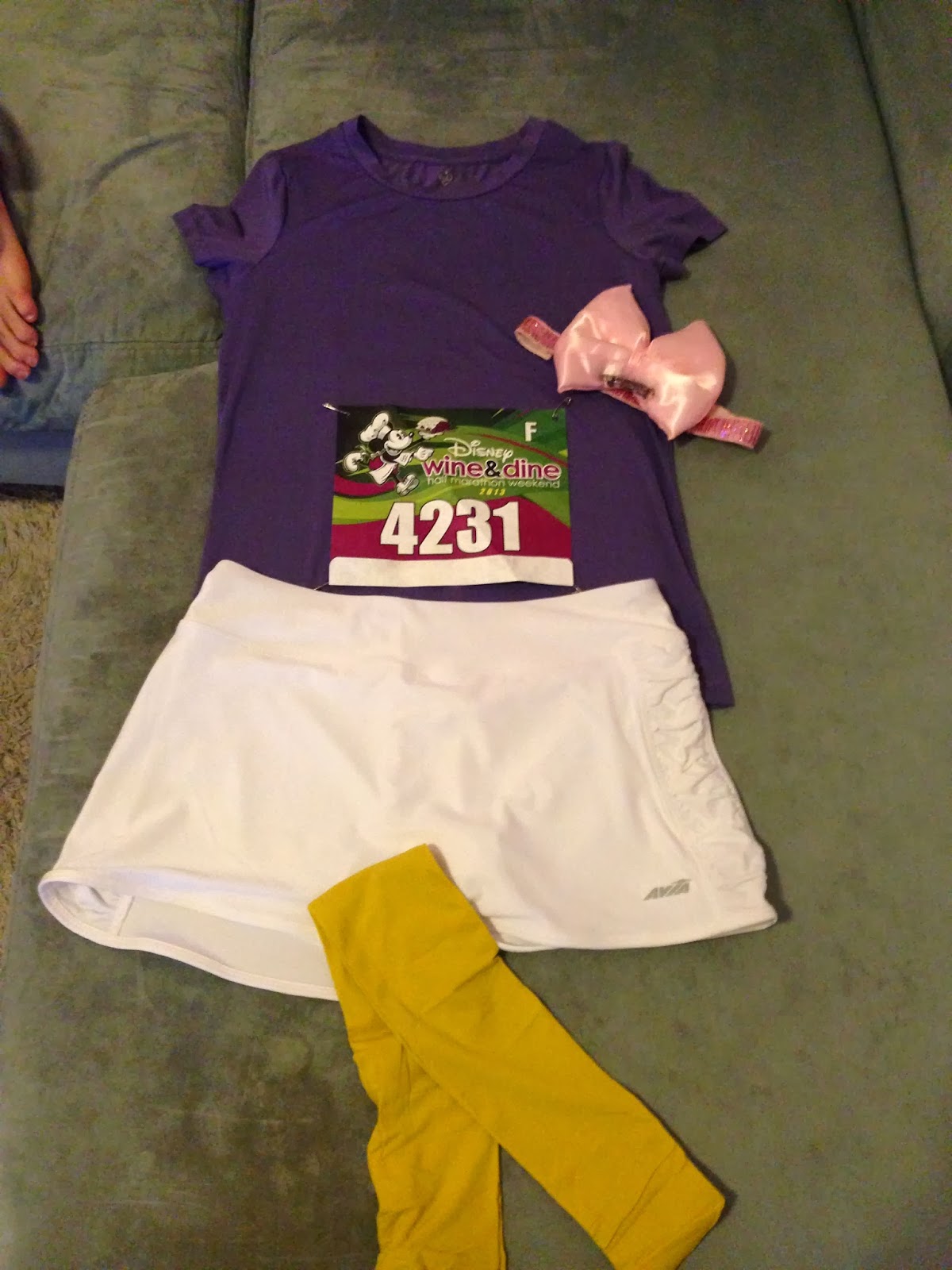 to Donald and Daisy!! 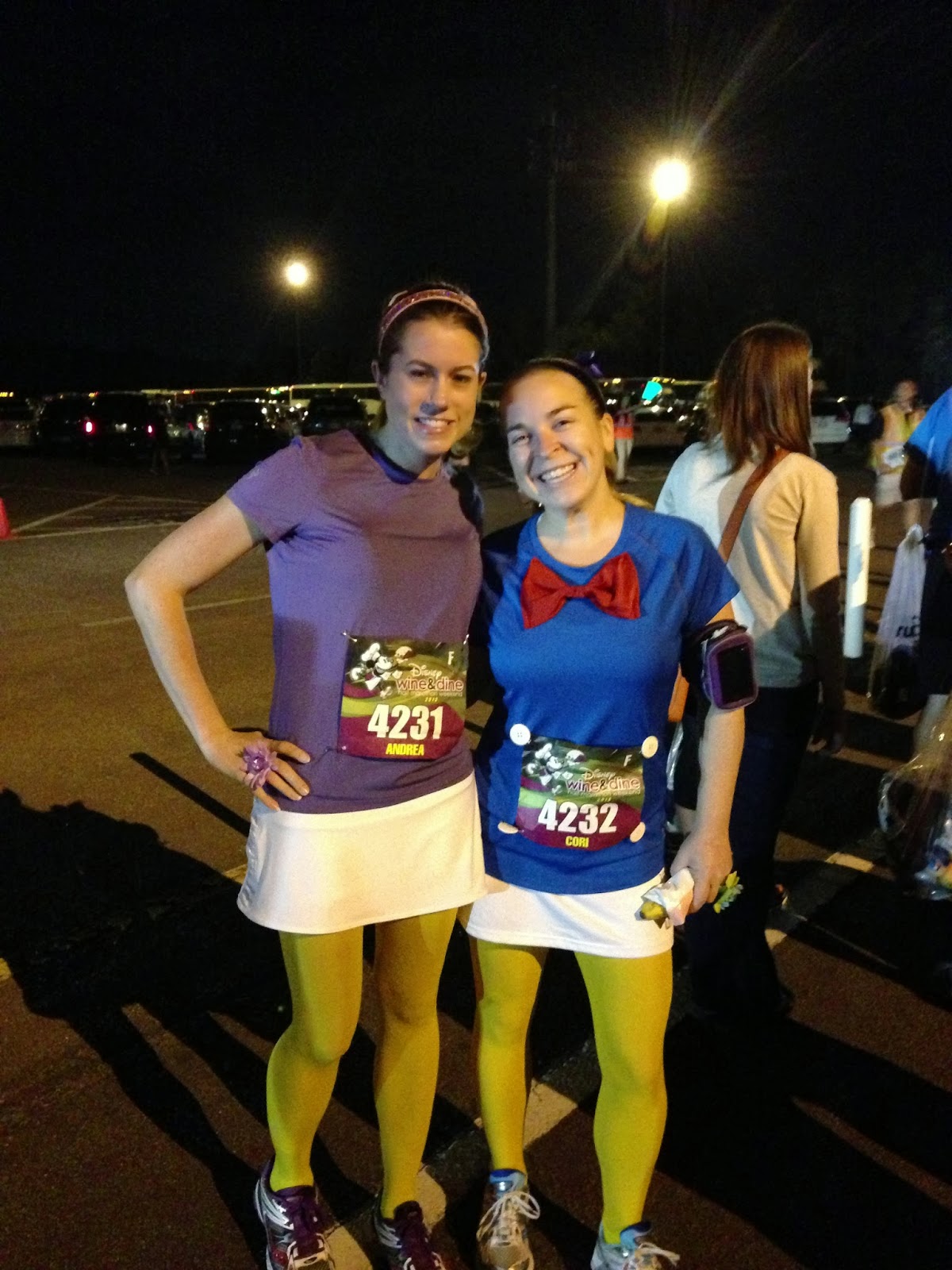 The line for the bus was a lot longer this year but it still went pretty quickly.  We met up with Justin (Always Running Forward) for a little bit then met up with Kristin (A Mom on the Run) before we headed into the corral. 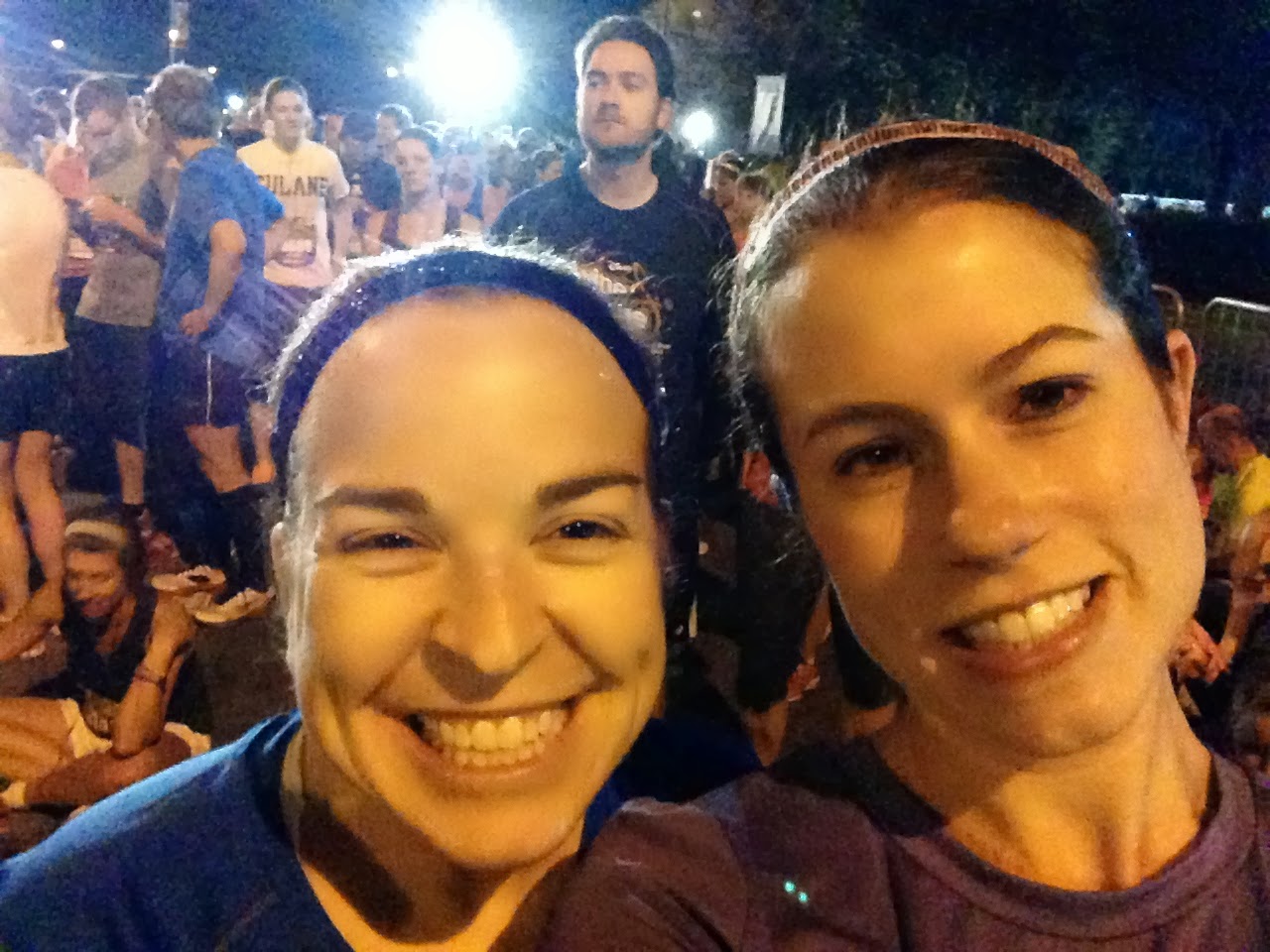 Before we knew it, the first fireworks went off! 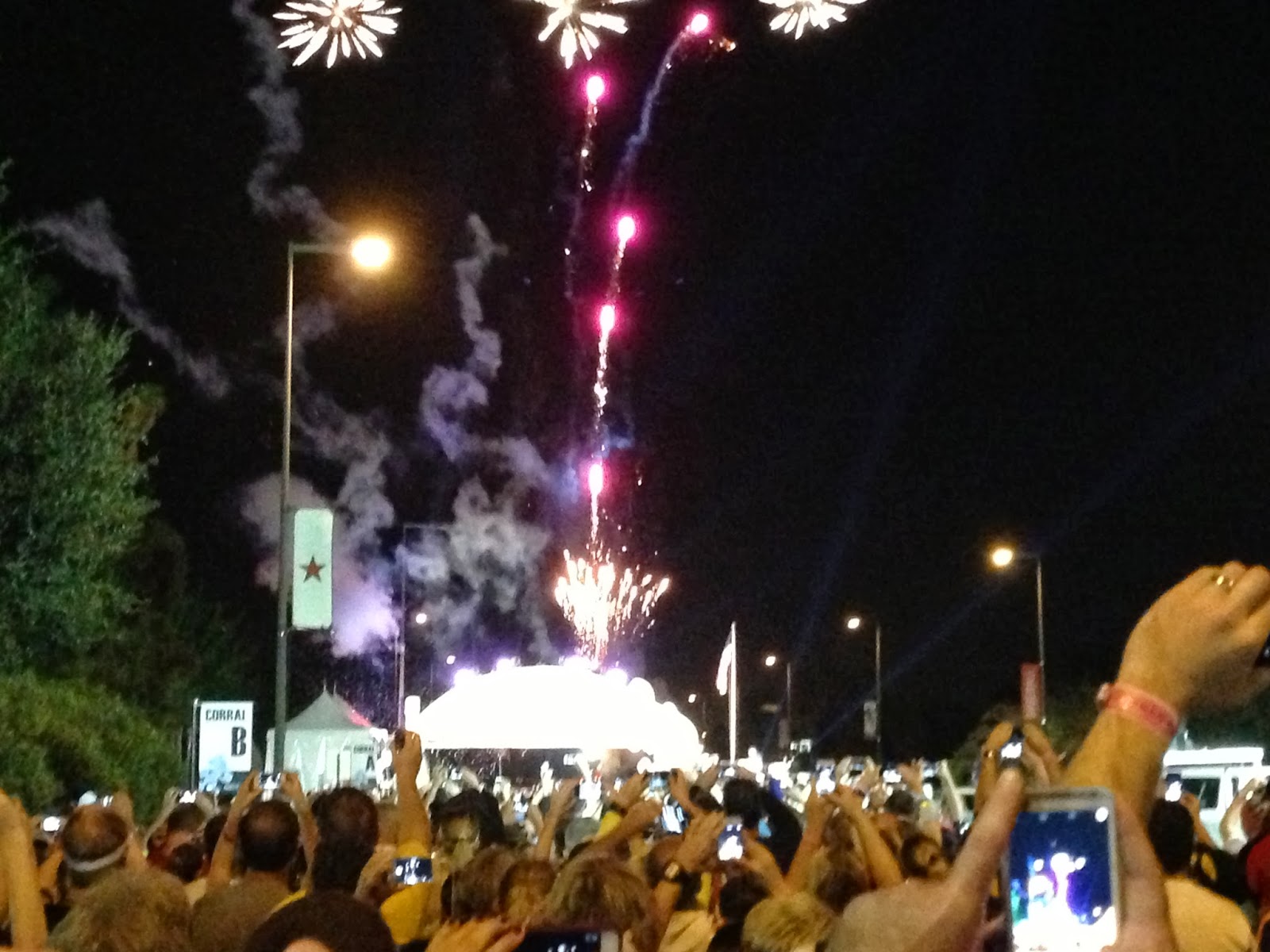 I love the new corral system.  It seems that the fireworks go off, you walk up some and then they're counting down for the next corral to go.  It seems to go so much quicker!

Soon it was our turn and we were off! 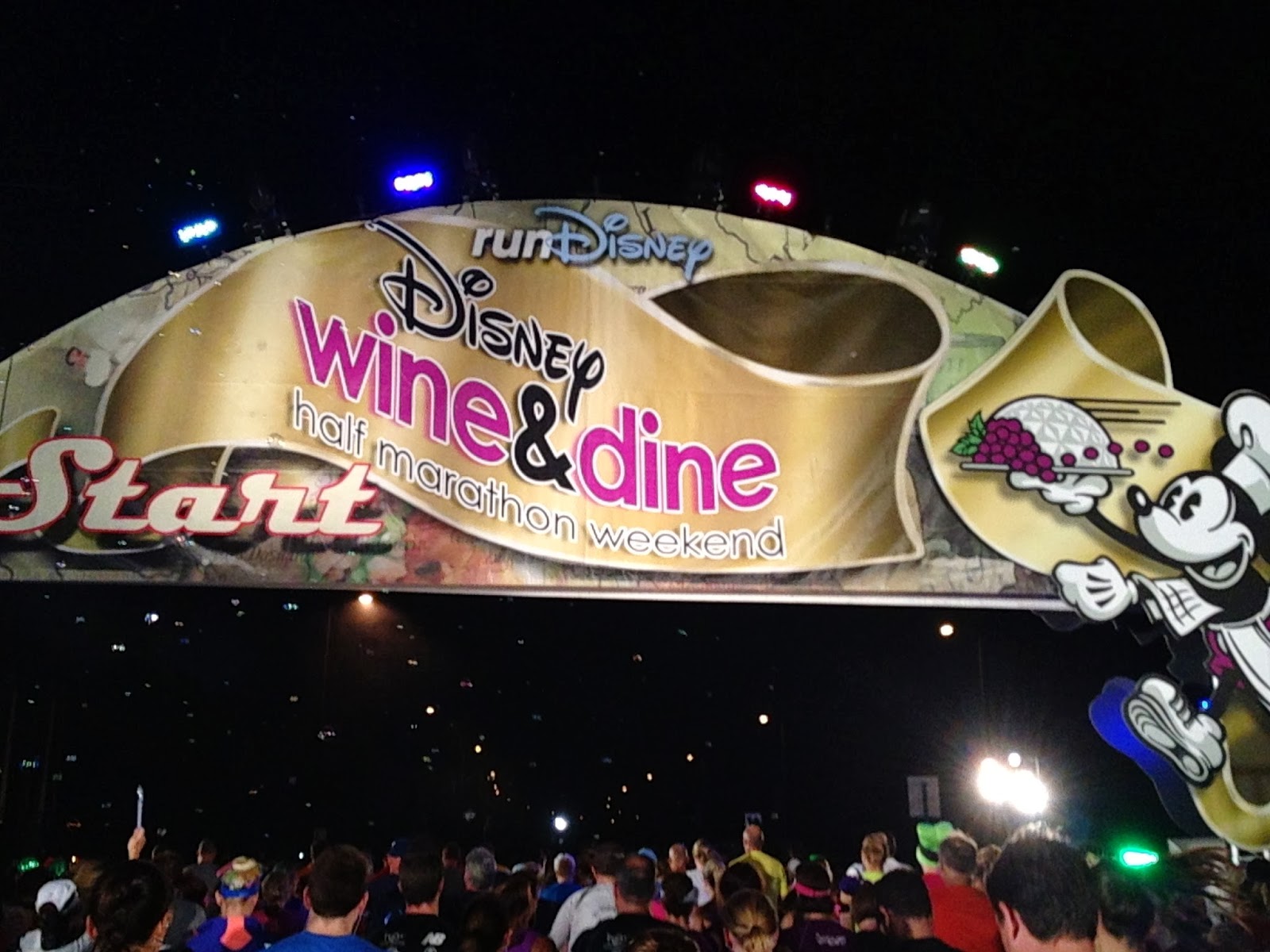 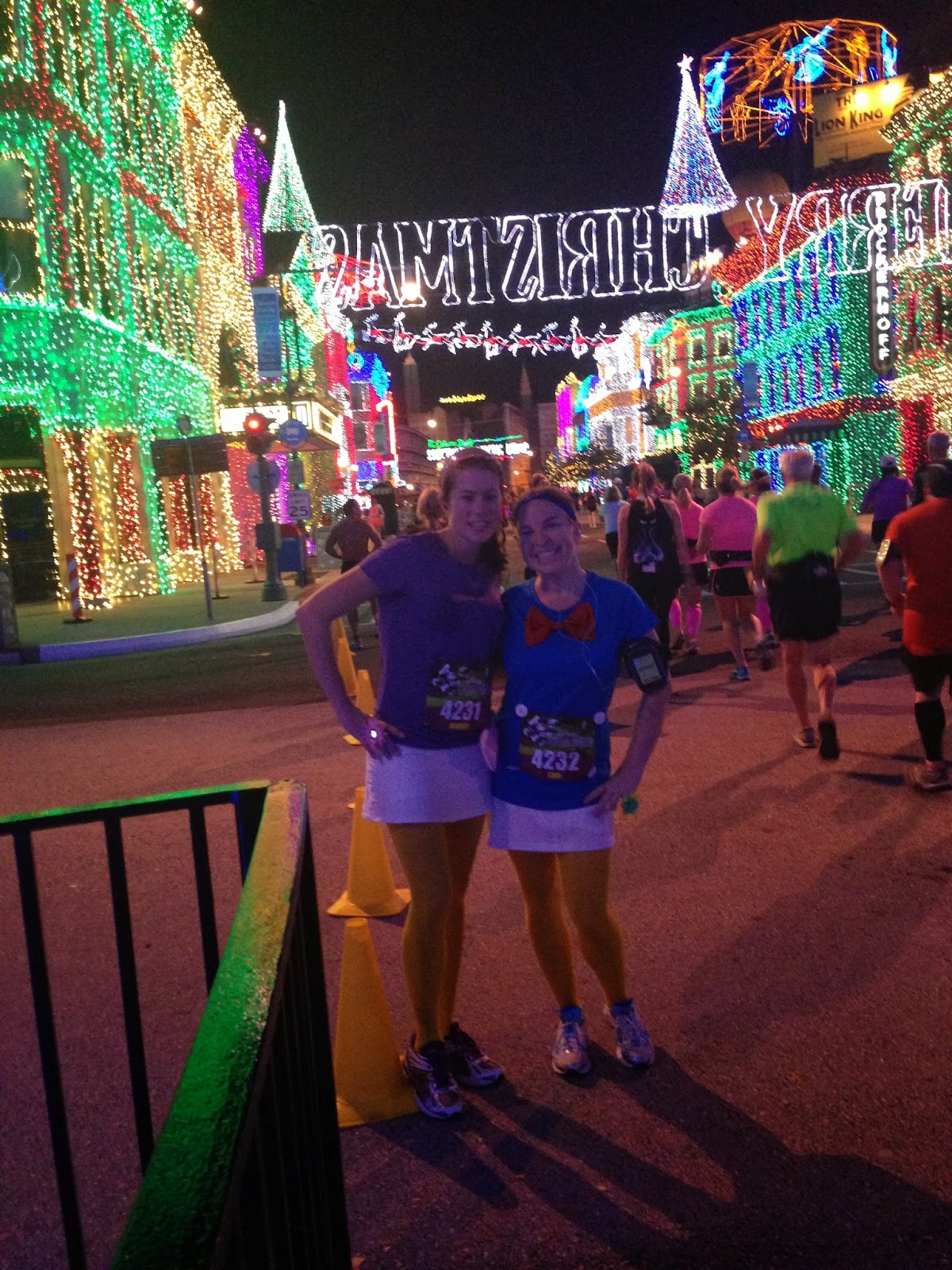 These next pictures make me laugh so I have to include them.  During the Tower of Terror 10 Miler, we had the most perfect jumping pictures.  So Cori wanted to recreate it 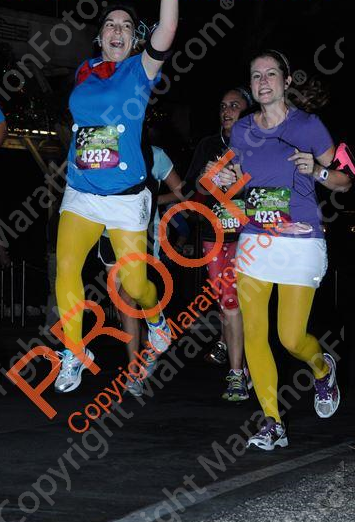 Only she forgot to tell me this...So I'm laughing at her 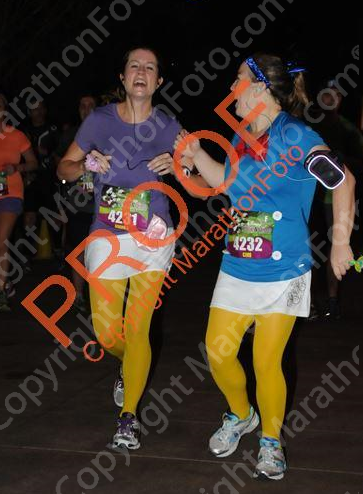 And asking her what she was doing 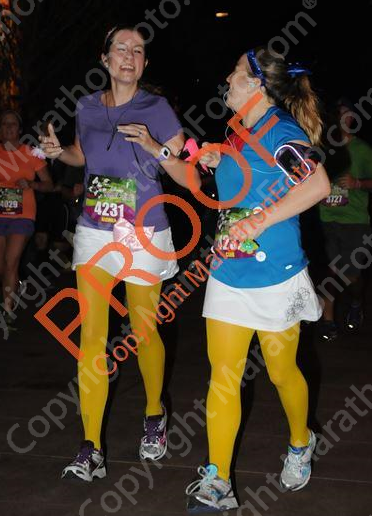 Oh, so you want to jump?  Okay 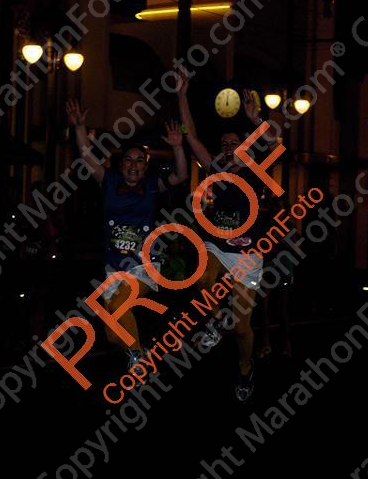 Definitely not as good as last time.

But soon we were running through Epcot 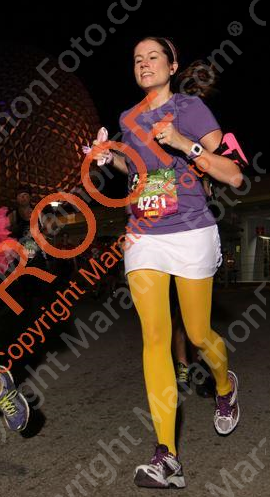 And before we knew it, we were done! 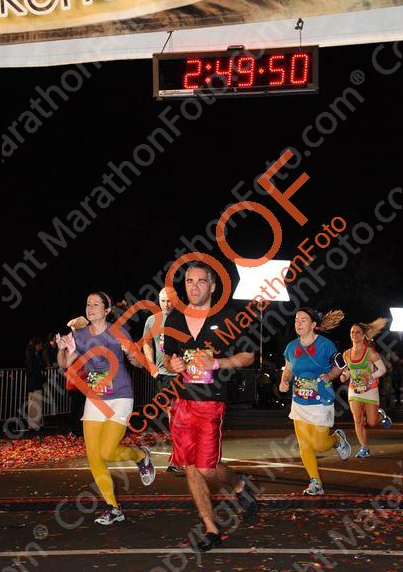 We headed into the drink line which was forever long---way longer than last year.  Cori doesn't drink so she skipped it.  Or so I thought.  She actually had found a spot with a nonexistent line and had somehow grabbed an extra beer along with her soda.  So I had two!

We headed back to the car to change--so much easier than checking bags and having to change in the bathroom and drag clothes along.  And then headed back to Epcot for a little Food & Wine. 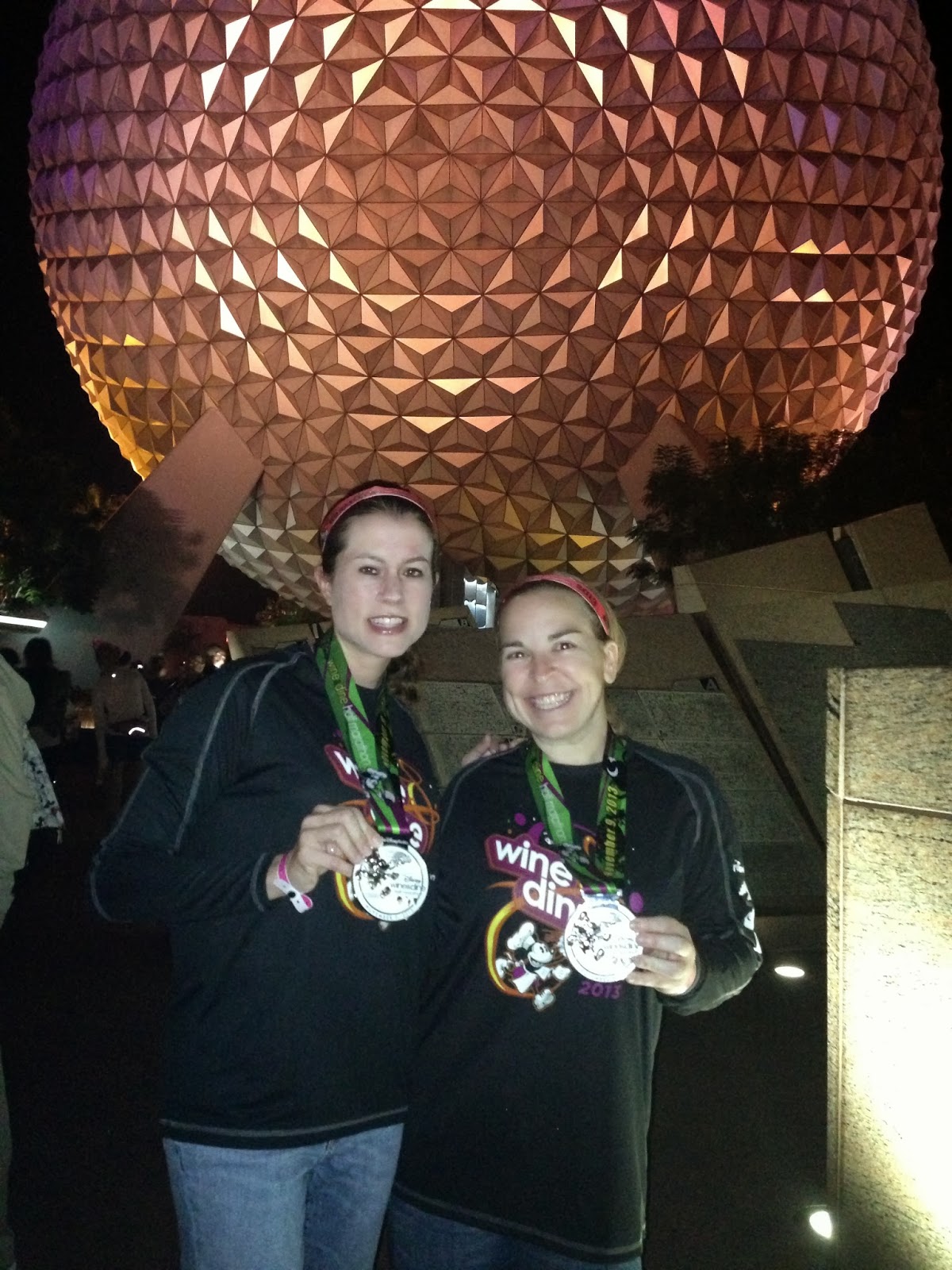 We saw Justin for a second then headed into the countries to meet up with Kristin and her hubby.  And that's when the worst part of the night happened.  There's this spot right around where the new Starbucks is where the runners run in the path of where parkgoers walk.  So they have this area where they switch the path of runners back and forth to get the people across.  I've seen this tons of times and I've never seen a problem.  But that night, the cast members were horrible.  The backup was insane.  You had to cross from one side, to an island in the middle, to the other side.  But the cast members weren't effective.  Instead of switching every time the island got full, they were holding the runners for way too long--we were stuck in a crowded small area for about 25 minutes.  Not good for the legs of just finished runners.  And people were nauseated.  We even saw one person faint.  It just wasn't smart and hopefully won't be a problem next year.

Anyways, we met up with Kristin and Adam and grabbed food in Italy.  I had the lasagna and it was so good.  By that time we were tired and pretty cranky from the earlier issue so we all decided to just head home. 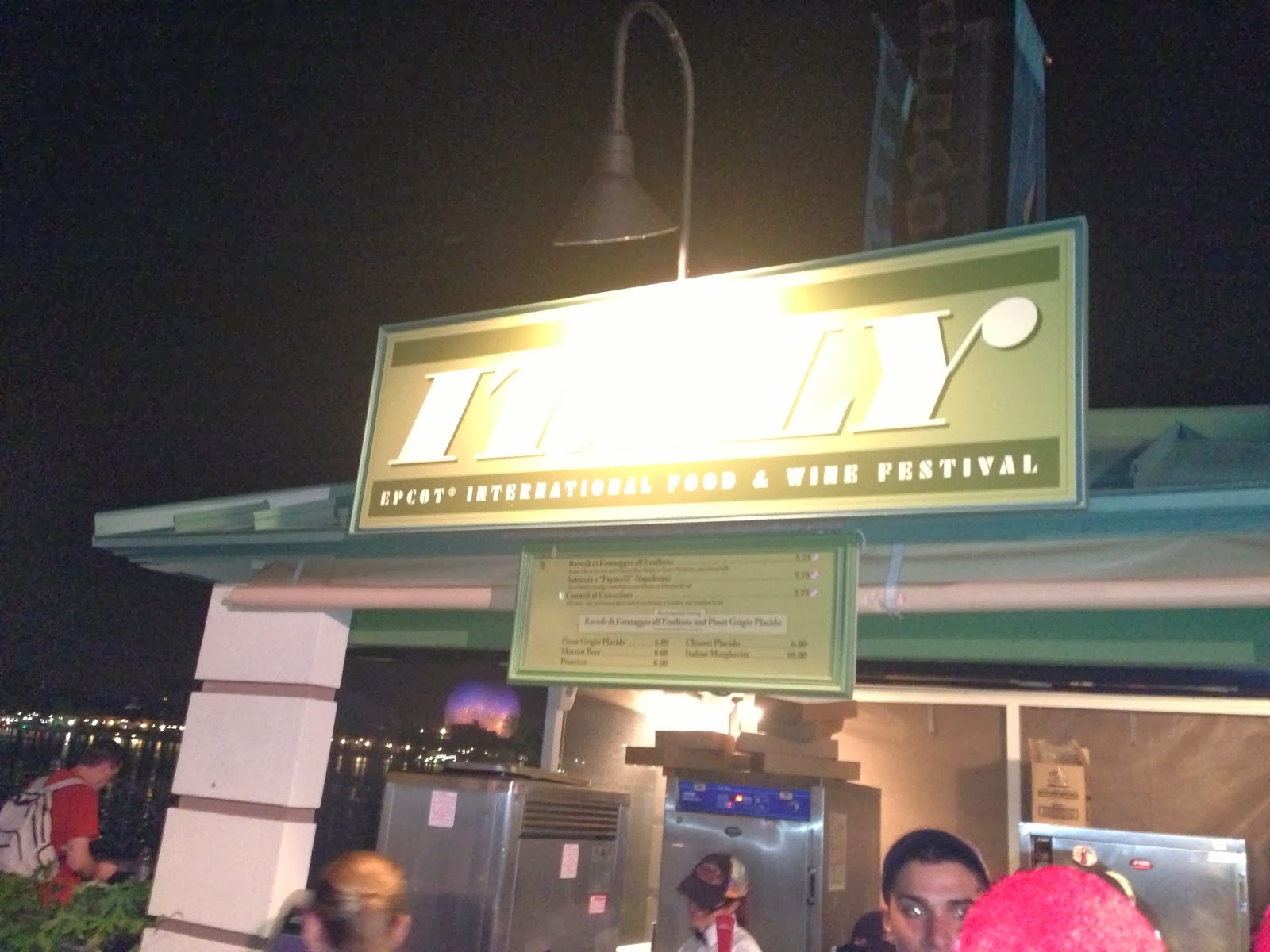 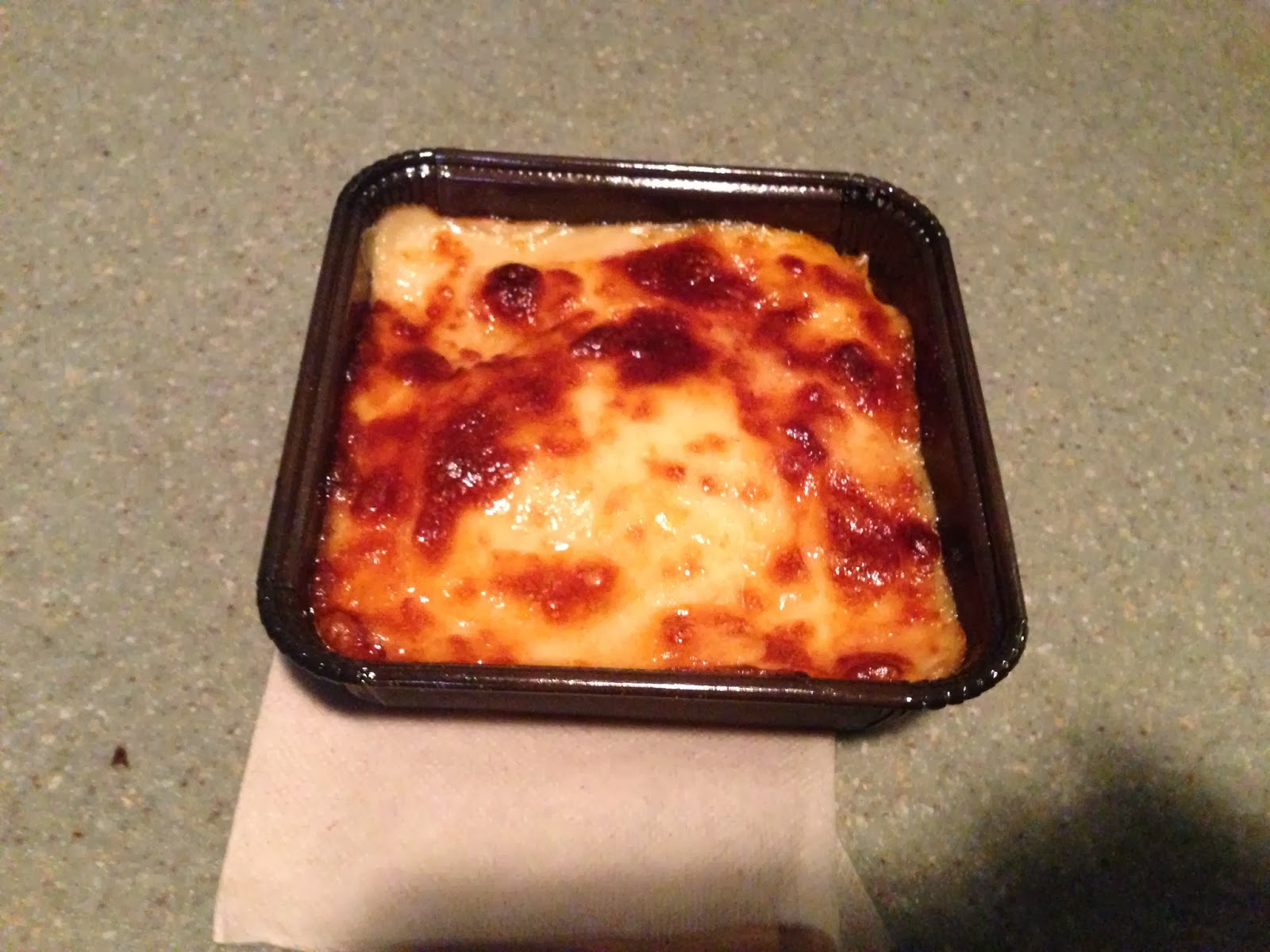 Still, we had a blast at the race! 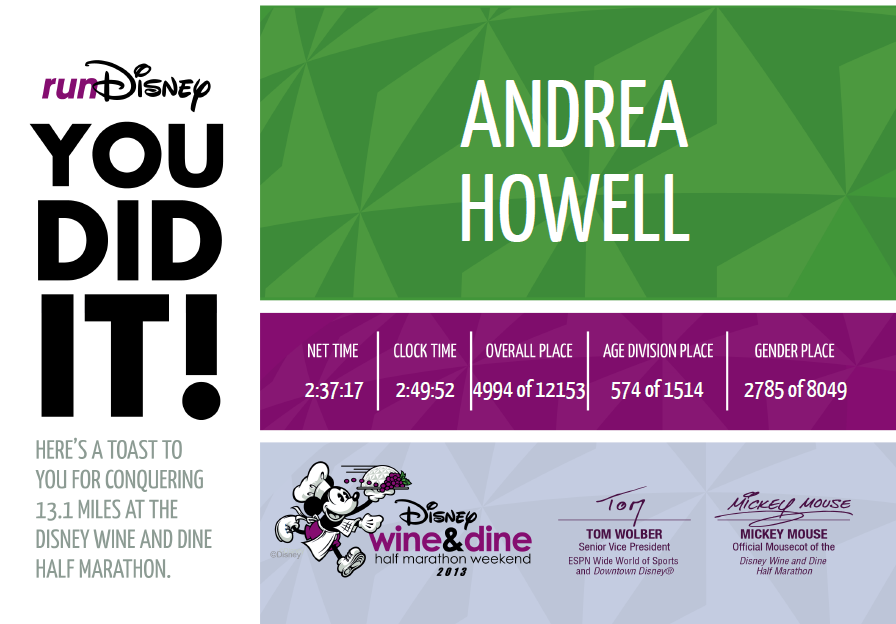 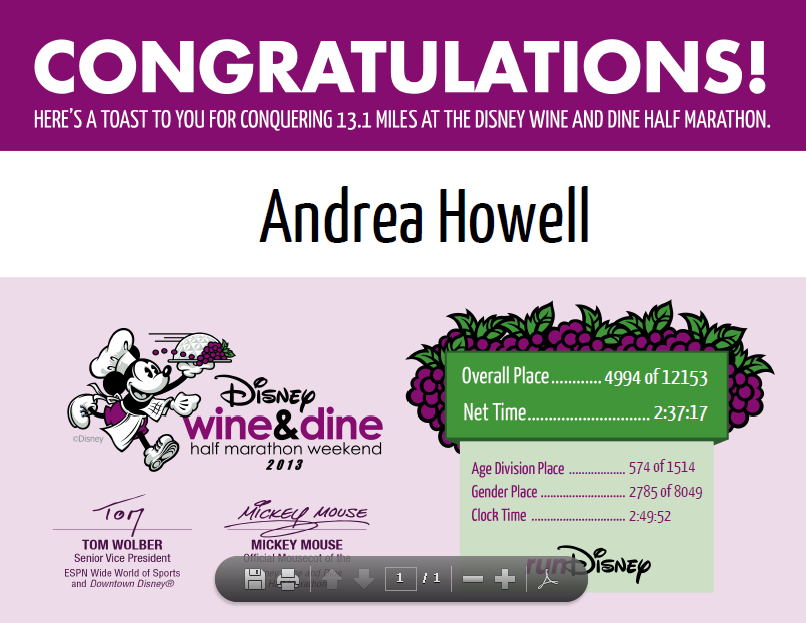 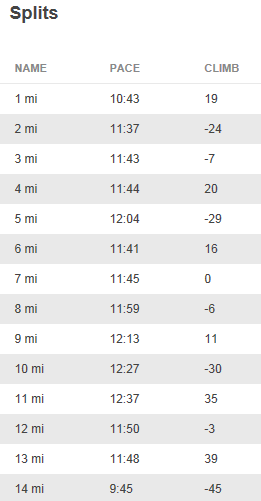 Email ThisBlogThis!Share to TwitterShare to FacebookShare to Pinterest
Labels: half marathon, races, runDisney