Final Thoughts Before the Big Race

It's the night before the Walt Disney World Marathon--my first full marathon and I'm freaking out.  I always knew I would be because I tend to get really nervous about things.  But it's a different kind of nervous.

Before I was nervous because I just wanted to finish in a way that I was proud of--mostly keeping up my 2:1 intervals with only a few extra walks thrown in.  But now, with my hurt leg, I'm worried about finishing at all.  I've had guys at running stores and the KT tape guy tell me I probably shouldn't be running. But I trained for so long that I just can't NOT try. Oh, and lets not talk about the fact that I'm running a marathon in brand new shoes in a new-to-me brand.  I've been walking around in them in the past week so hopefully that counts as breaking them in.

And I'm mad.  Mad because I should have listened to my gut when getting new shoes instead of the running store guy.  Mad because until 2 1/2 weeks ago I was pretty good at following the training plan.  Mad that I'm letting this get to me.

I haven't run in 2 weeks.  The last time I ran, it was when I was trying on new shoes in the store and it hurt just to do that and I was limping while running.  But I'm really hoping the 2 weeks rest was just what I needed and that I'll feel great tomorrow.

There is a part of me that's excited for tomorrow.  But it's smaller than I thought it would be.  I think once I get there tomorrow and see all the runners, it'll kick in.  I hope so.  I just need to relax and enjoy the magic like I do with all the other runDisney events.

Enough of the negative--I've had so much fun this week meeting up with different groups of running friends.  It's been so great talking about running and life and getting great advice and support.  And I've thoroughly enjoyed spending lots of money at the expo (is going to the expo 4 times in one week too much?  NAH!!!)  Spend all the money!!

My costume is ready--it's a loose version of Sleeping Beauty.  I had a way better shirt but it bugged me on a training run so I ditched it.  But I still think it's pretty cute. 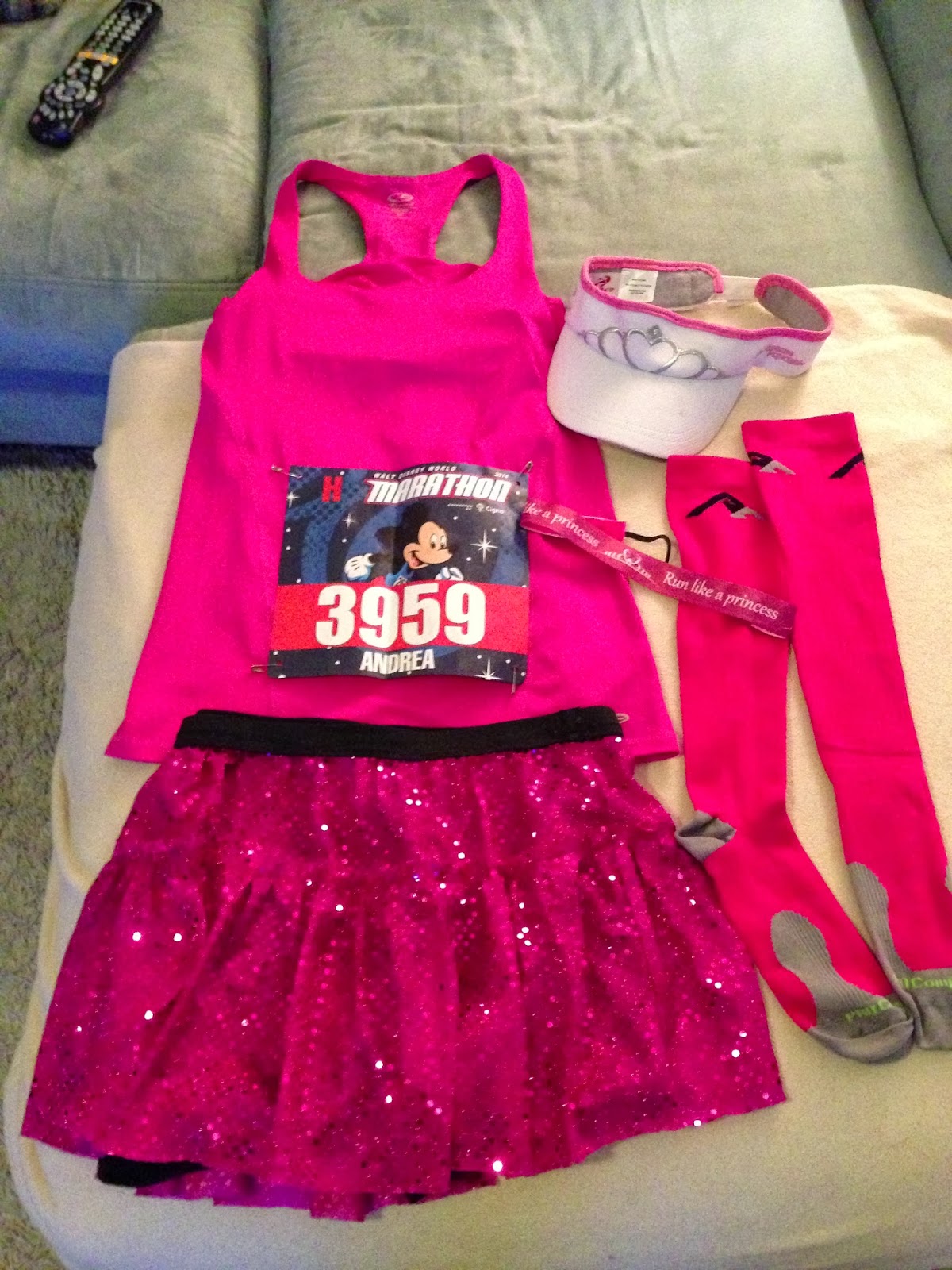 Good luck to everyone running tomorrow!  I have the alarm set for 2:45am.  See you out there!
Posted by Andrea at 9:04 PM

Email ThisBlogThis!Share to TwitterShare to FacebookShare to Pinterest
Labels: marathon, Ready for the Race, runDisney