On Monday night, I attended the Yelp Gets Friendly at LongHorn Steakhouse event.

Not only was I spoiled with delicious food, but I met some great new friends (one of whom I discovered I was actually already friends with on Facebook through a DisBrides group!!)

When we walked in, we had assigned seats. 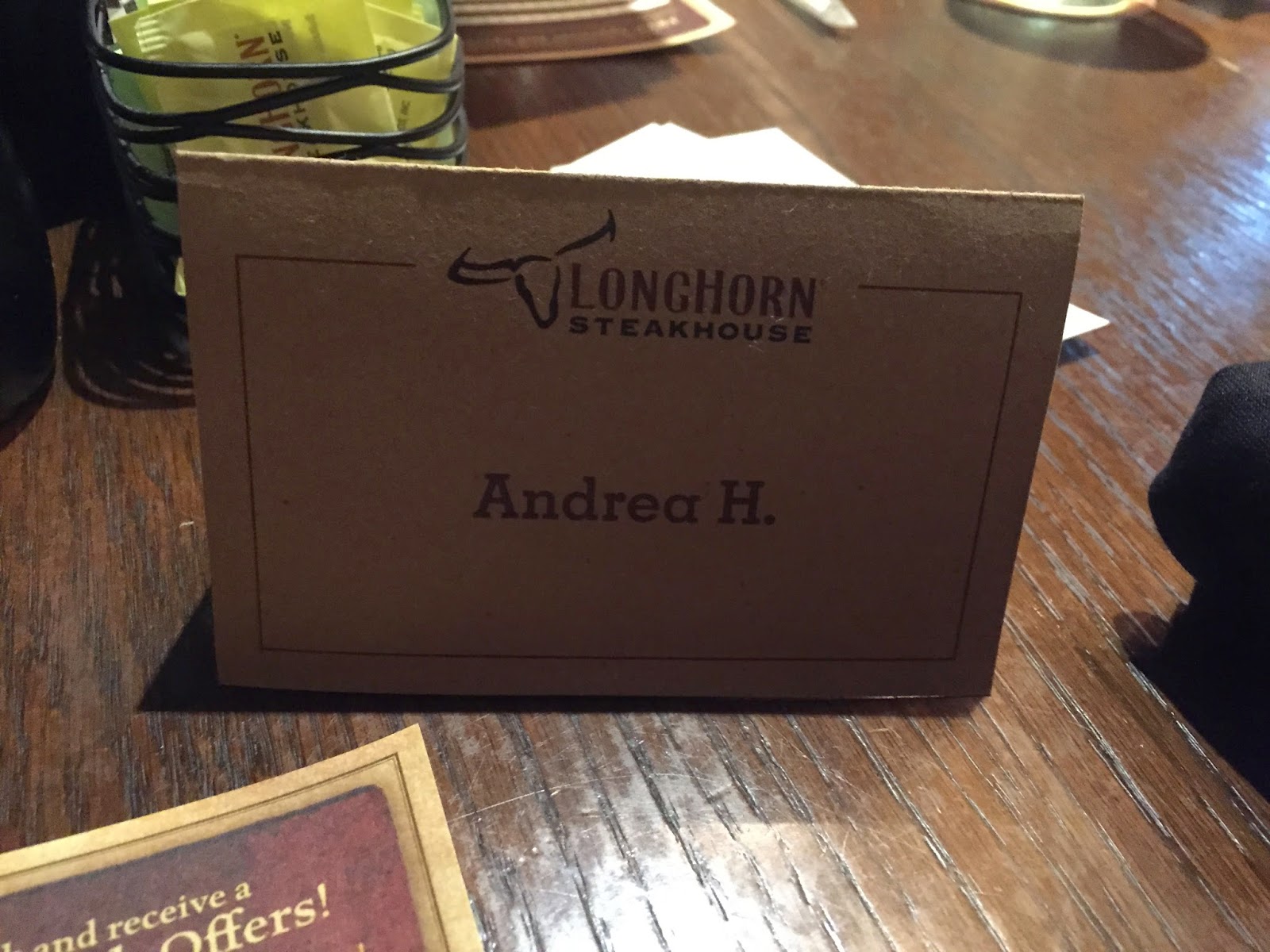 Those of us who had been Yelp Elite for several years were on one side, and the newbies were on the other.  After every course, the Elite on the other side moved down one seat.  So we got to know a bunch of new people.  I had so much fun connecting with them and there were fun conversation starter cards on the table too!

The menu for the evening looked yummy! 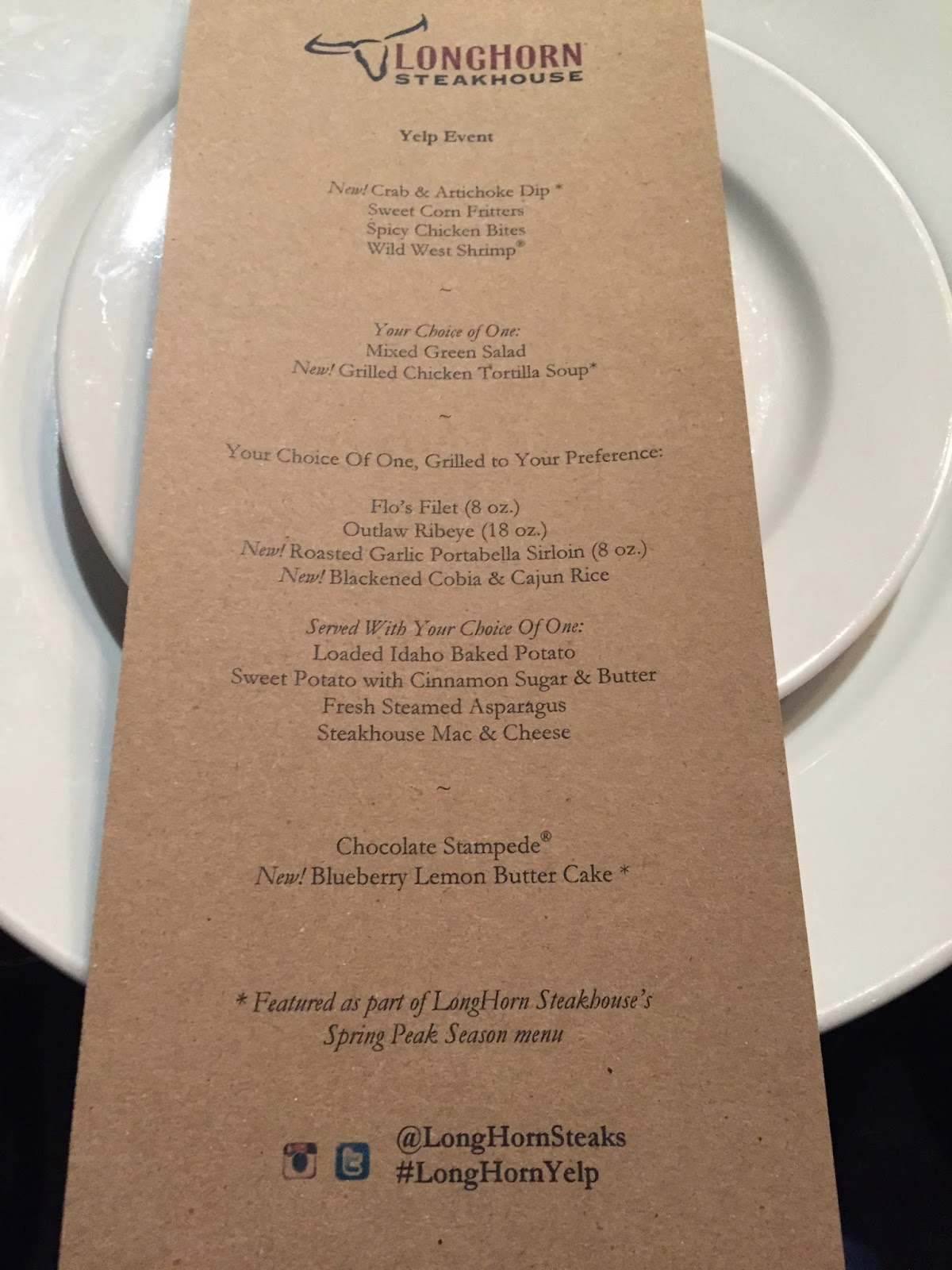 First up, the drinks.  I had a Strawberry Margarita that came with a ROCK CANDY STIRRER!!!  That was so much fun!  And there was more in the shaker so it was like a double drink! 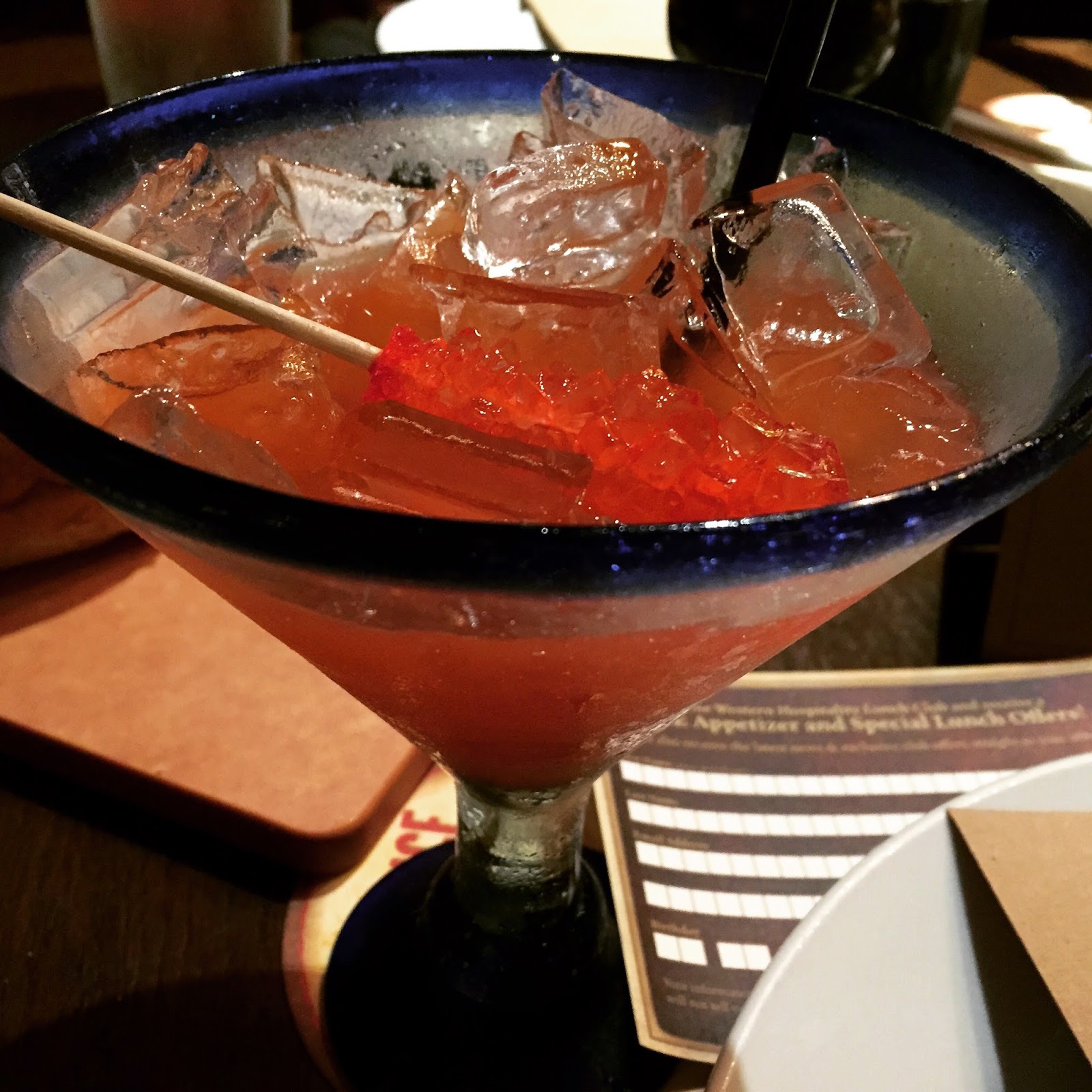 The appetizers were served to the table and we got to taste them all. 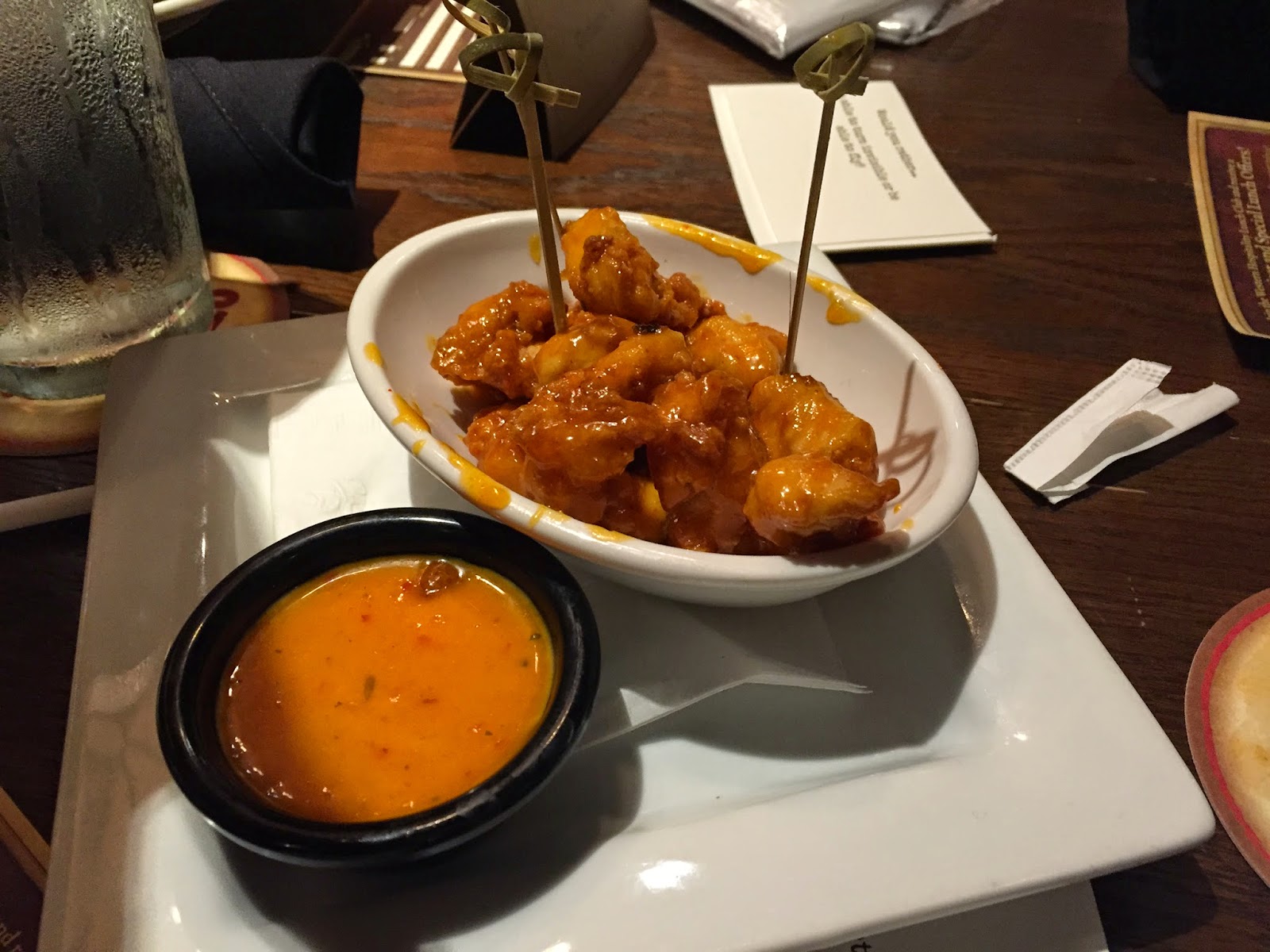 The Spicy Chicken Bites were a lot of people's favorite but I'm a wimp and it was too spicy for me. 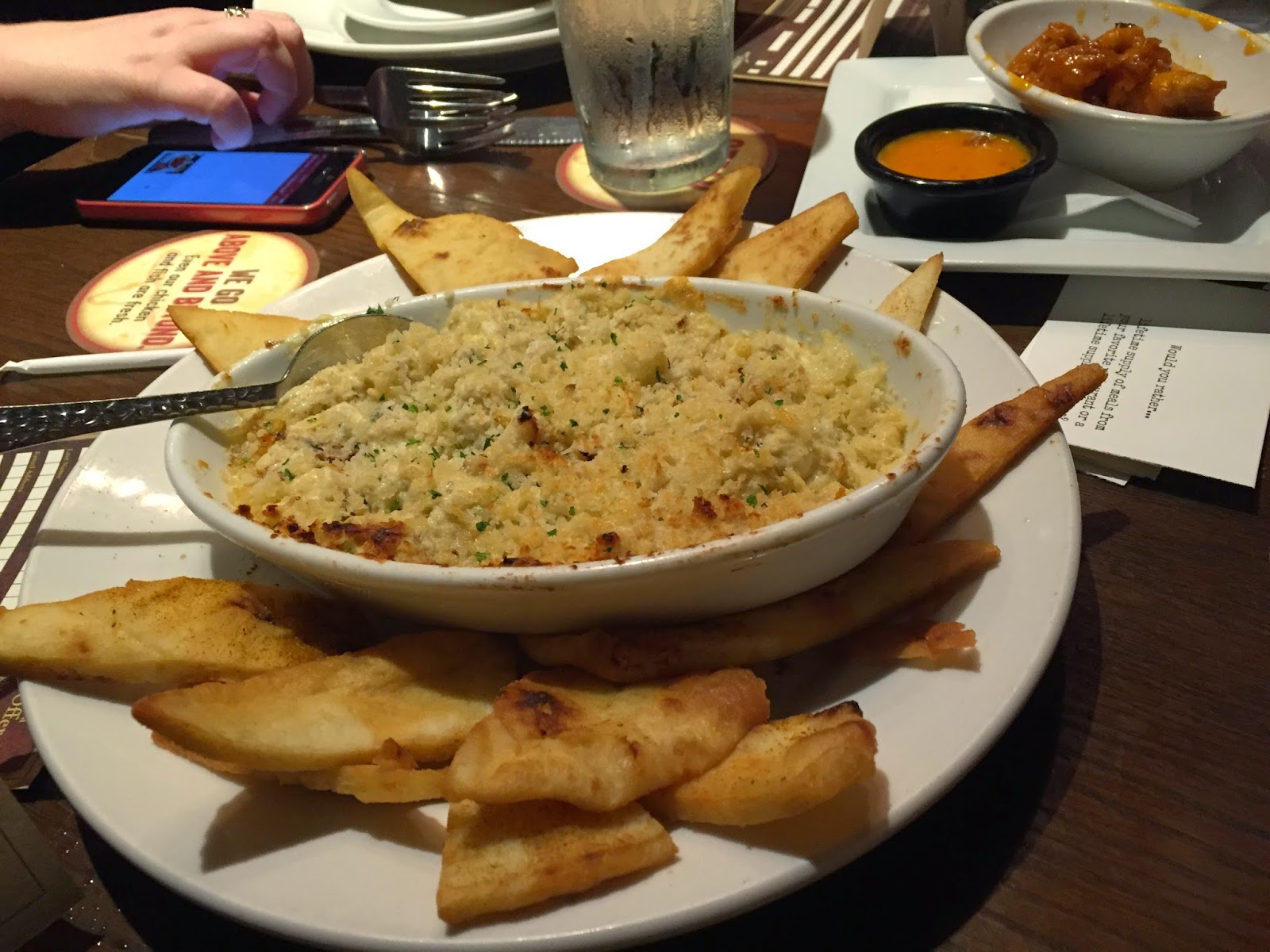 If forced to choose, I *think* this Crab & Artichoke Dip was my favorite appetizer. 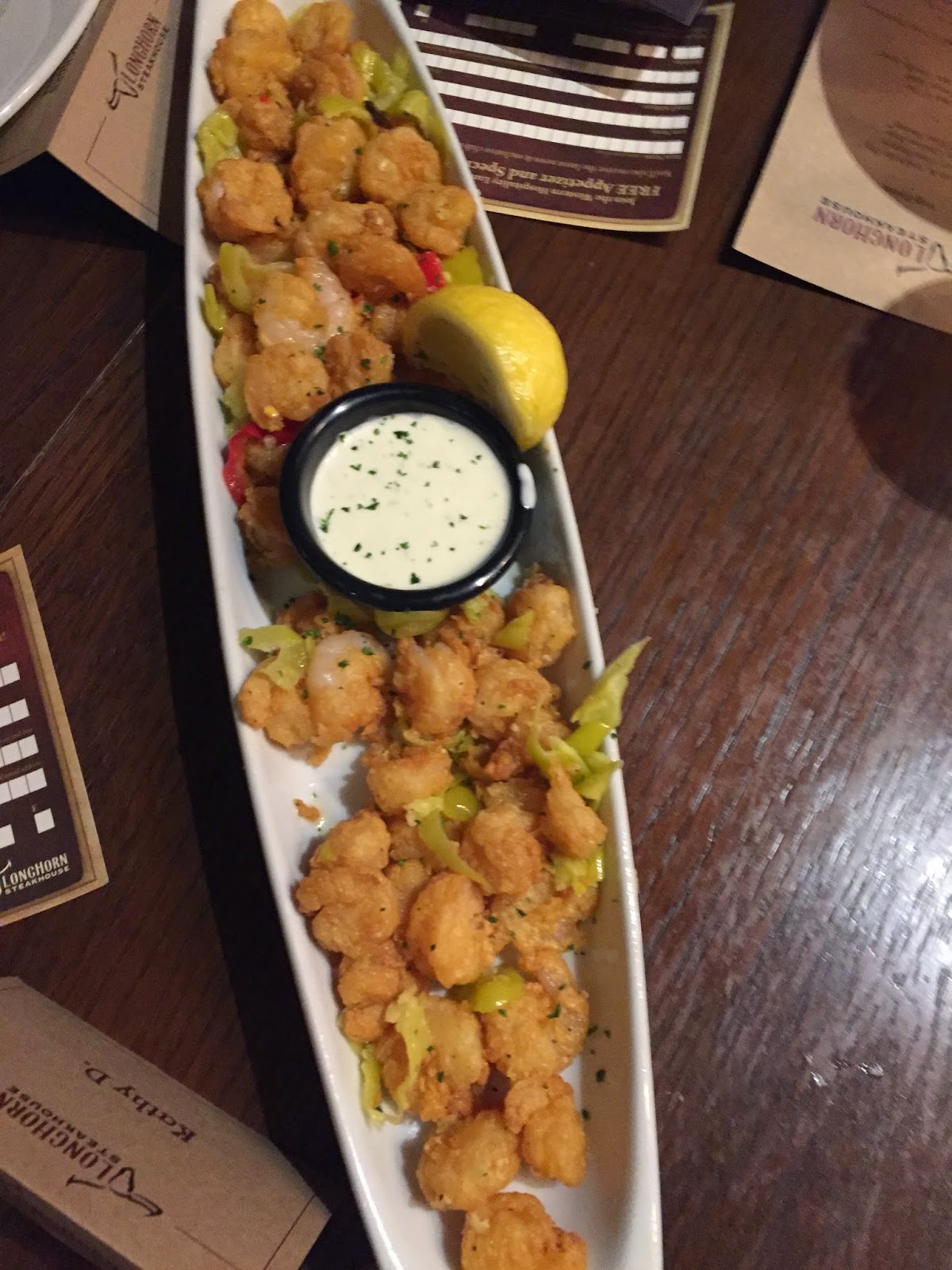 This Wild West Shrimp did have a teeny bit of kick to it, but I could still handle it. 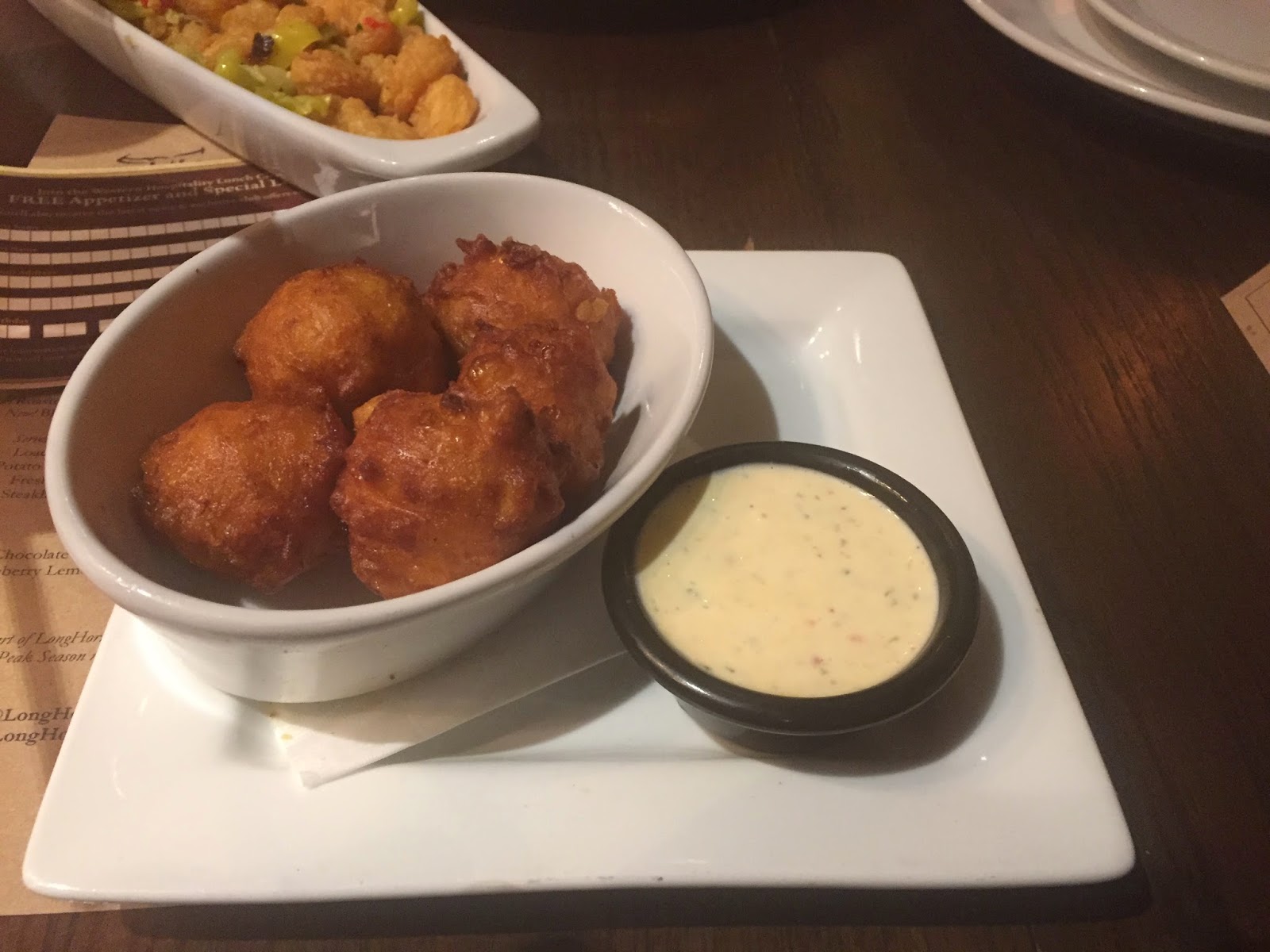 And I really liked these Sweet Corn Fritters too!

Up next, we had our choice of the Grilled Chicken Tortilla Soup or the Mixed Green Salad. 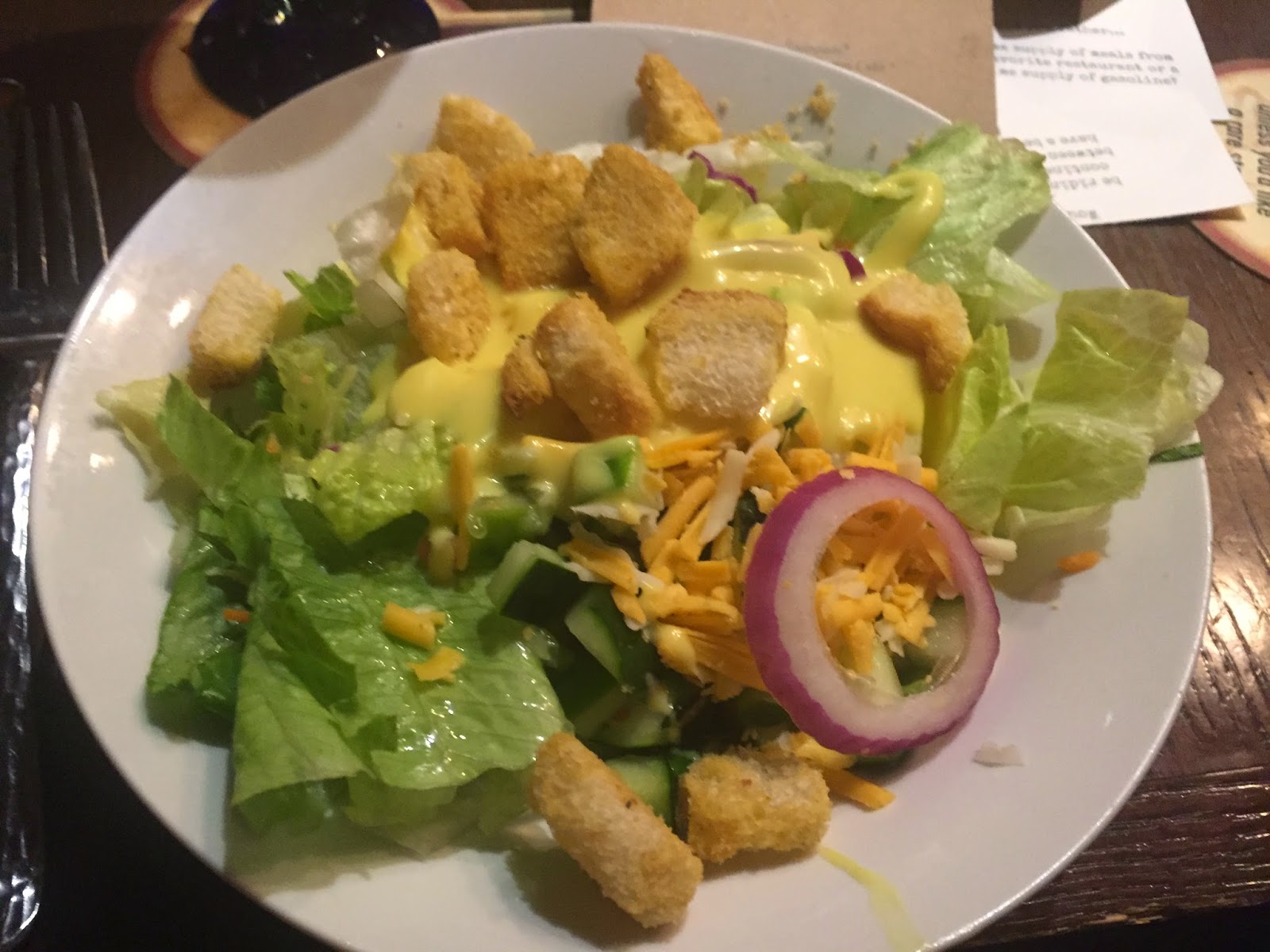 I knew the soup was spicy so I went with the salad.

They brought out the cuts of meat to show us the difference. 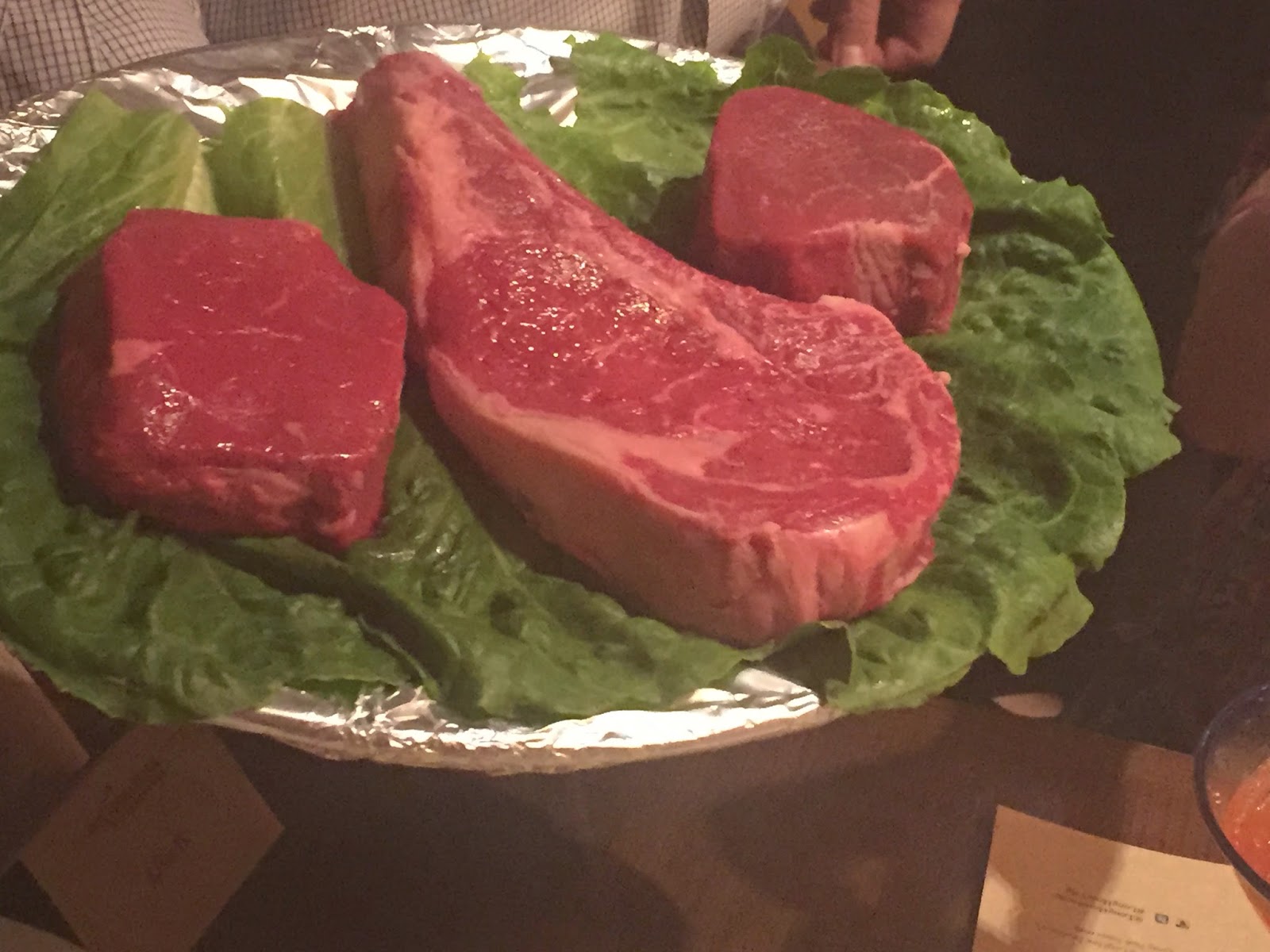 For entrees we had a choice of one seafood item, Blackened Cobia & Cajun Rice, or three steak options, 8oz Flo's Filet, 18oz Outlaw Ribeye, or 8oz Roasted Garlic Portabella Sirloin.  I seriously could not decide between the steaks.  Filet is my absolute favorite and what I usually order.  I was intrigued by the Ribeye because I would never order that for myself.  But the Sirloin had a delicious sounding sauce.  So I told the waitress to surprise me.  What did she choose? 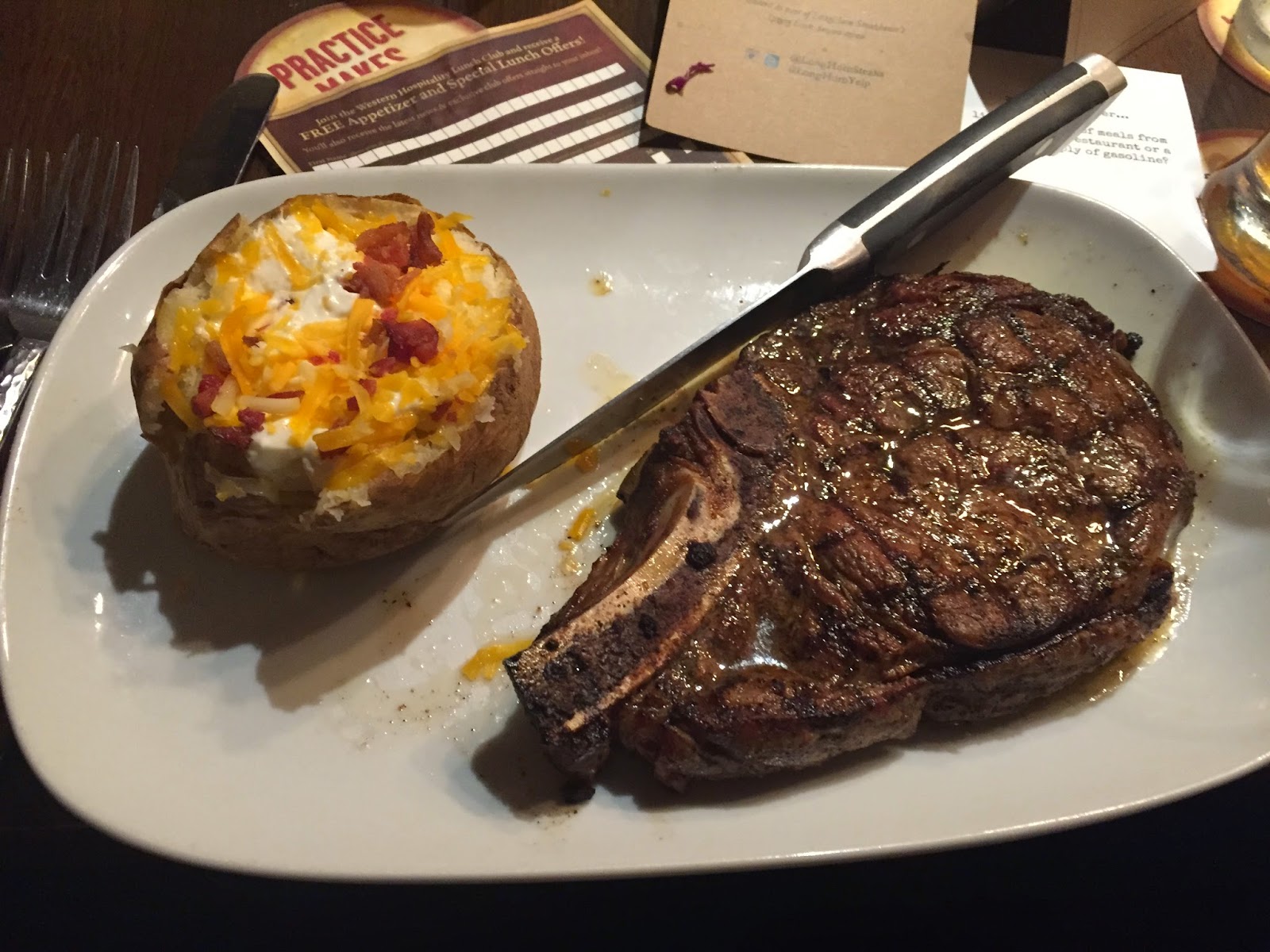 The Outlaw Ribeye!  It was huge!!  I only ate half of it along with my Loaded Idaho Baked Potato and took the other half home.  I probably could have eaten it all but then I knew I wouldn't be able to enjoy dessert.  I also tried a little bit of one of the other sides, the Steakhouse Mac & Cheese.  It had bacon in it and was really tasty!  (I didn't try the Sweet Potato with Cinnamon Sugar & Butter or the Fresh Steamed Asparagus but they looked good!)

Finally two desserts were brought out for us to try. 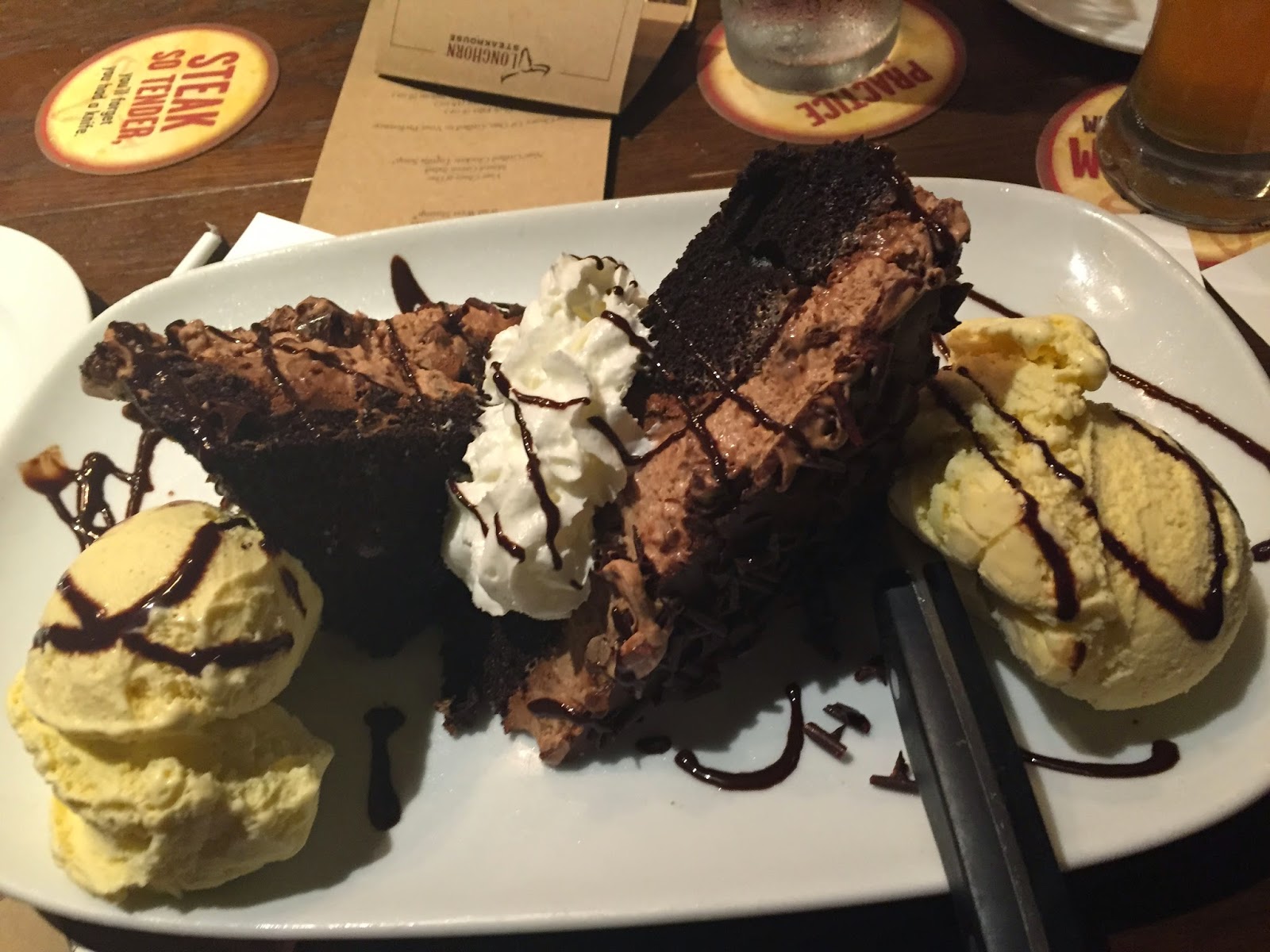 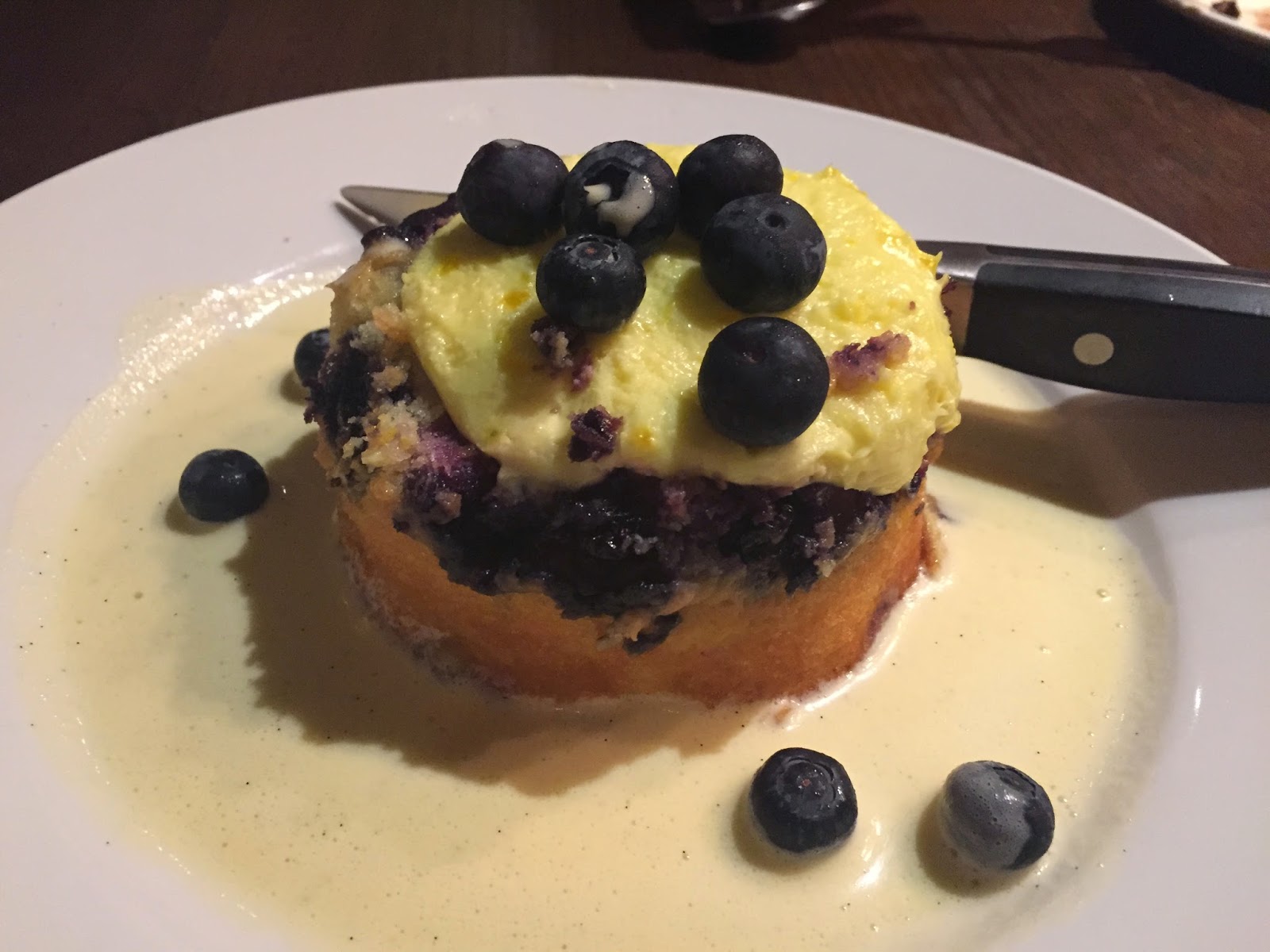 Normally I'm a chocolate girl all the way.  But the Blueberry Lemon Butter Cake was soooo good!  I really don't think I could pick!

For a parting gift, we were treated to a free appetizer coupon for the next time we dine at LongHorn Steakhouse.  And there was also an intagram contest--which I won!  Yay for a $25 gift card!

Thank you Andi and LongHorn Steakhouse for a night of great food and new friends!!
Posted by Andrea at 10:44 PM